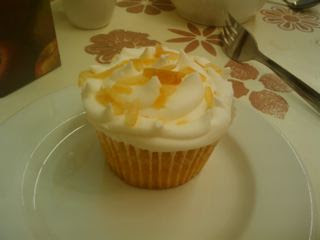 Our trip was punctuated as ever by nearly as many coffee stops as shop visits.  Mother wanted a cup of tea in John Lewis, we had lunch at Carluccios in St Christopher’s Place and later in the afternoon stopped for a drink in M&S.  In the interests of continued research I bought a cupcake in their cafe (pictured above).  I have to say it was quite revolting.  I wish I could remember the price – it was maybe £2, possibly bit less.  The base was dry.  The topping was sickly sweet and quite hard – not really like meringue either.  The strands of lemon zest were also hard.  It’s only redeeming feature was a blob of lemon curd in the middle but there wasn’t enough of this either.  Rubbish!