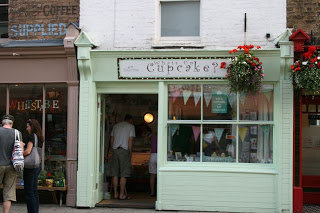 Today we paid one of our regular visits to Whitstable in Kent.  It is one of the closest seaside places to East London and traffic permitting, we can be there in around 1 hour 15 minutes.  Our previous trip had been in the spring of this year where we had been dismayed by the impact of the recession on the town.  The closure of Woolworth’s, like for many shopping areas had left a gap like a missing tooth and was joined by one of our favourite gallery shops near the old Oyster House.

We were heartened, visiting in late summer, to see that Whitstable is thriving (albeit under the threat of post office closure and arrival of Tesco).  The town was positively bustling with empty units now filled by a Costa Coffee (contentious apparently), restaurants and a new gallery in place of the one that had closed.
Also new in town, as of ten weeks ago, is What’s Up Cupcake? at 64 Harbour Street. I hadn’t expected to find a cupcake shop in Whitstable so naturally I had to buy some cupcakes to try them out. I chose one each of “Ella’s Bellas” (Oreo) and “Ishy Wishy” (strawberry) flavours. My husband and I ate them for our pudding that evening in what is becoming a Saturday night ritual.
Now I would usually photograph cupcakes that I was going to feature on here. Unfortunately, owing to the warm weather, the butter icing was a little squashed by the time I got them home.  This is a pity as one of the strengths I noticed at What’s Up Cupcake? is the attention to detail in packaging.  Each cupcake was presented in a clear bag with a gold card underneath in the base and a pretty tag attached with a ribbon.
So how did they taste?  The bases didn’t make a massive impact on me, I could not decide whether they had been individually flavoured.  But the buttercream icing?  Knock out.  The Oreo cupcake had a quarter of a mini oreo pressed into the top and was cream coloured with speckles of cookie as you might see in cookie dough ice cream.  The strawberry buttercream was a pale pink with a piece of strawberry as decoration.
As mentioned above, flavours are given cute names. Prices were a very reasonable £1.50 each going down to £12 for 15. Also on sale in the shop were a range of retro style gifts and cookware, they have really made the most of a very small space. What’s Up Cupcake is open from 10.30 to 5pm on Thursday through to Sunday.