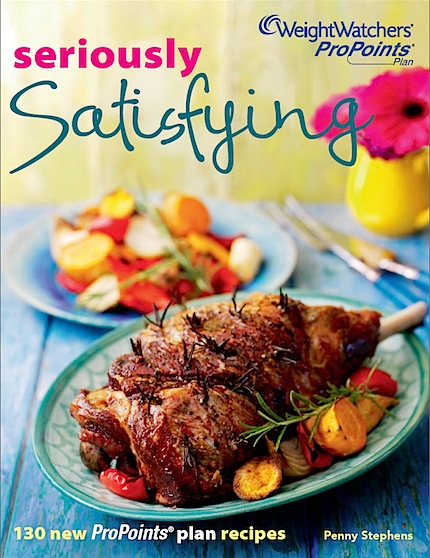 Arguably Weight Watchers with their “points” system is the most prominent diet brand in the UK.

Earlier this year, Weight Watchers launched their new “ProPoints”, apparently more likely to eat foods that will keep you fuller for longer.

A new system has meant a confusing few months for Weight Watchers’ followers; plans and labels showing old values, difficulty converting one into the other,

On the whole, Seriously Satisfying is filled with realistic meal choices that are uncomplicated to make and suitable for people wishing to lose weight. It’s one of the better books I’ve seen from Weight Watchers with its finger on the pulse of food trends more than usual.

Amongst the desserts I wowed at the marbled chocolate cheesecake and strawberry trifle loaf but found others such as ice cream balls spiked with cocktail sticks and sprinkled with silver baubles ridiculous.

My only real criticism as a whole would be that the book is too general however I accept it has been written to appeal to people who might not normally cook from scratch themselves. As such it is appealing to the eye and easy to follow.

Throughout the ingredients lists, filling and healthy foods are shown in green type, freezable and vegetarian recipes are also indicated. Timings are usefully broken down into preparation, cooking and cooling times. Recipes are indexed both alphabetically and by their ProPoints value.

Seriously Satisfying is published by Simon & Schuster in paperback and available from Weight Watchers’ meetings. You can also pick it up from Amazon. With thanks for the review copy.

I will be blogging a recipe from Seriously Satisfying in tomorrow’s post.