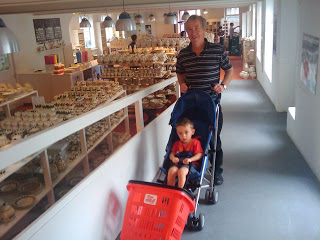 Five years ago I bemused my colleagues with news of a trip I’d taken to Stoke on Trent.  I had spent a happy day with my husband viewing the bottle kiln at the Gladstone Pottery Museum (pictured above), with it’s cafe that serves tea and cake on Royal Winton Chintzware, several factory shops to salivate over crockery and rounded it off to the museum in the town centre where they display historical ceramics from the region and describe how they are made.

For a crockery fanatic like me, a trip to The Potteries is heaven and I have been hankering to return ever since.  Taking my son on a mini holiday to the Midlands this week presented me with the opportunity and to my father’s surprise I requested that we take a trip up the M6 to Stoke in order that I might revisit the Emma Bridgewater factory shop.

Bridgewater crockery enjoys a cult following.  A relative newcomer to the Staffordshire pottery scene, the company was founded around 20 years ago and is distinguished by it’s creamware with stamped designs such as polka dots, hearts and stars.  There are also designs with wording around the edge and drawings.  The core designs are polka dots and “black toast” which stay in long term production, other designs come and go within a couple of years, hence their collectibility.  There is even a collectors club and rare pieces command high prices at auction.  Prices brand new are not cheap: £15.95 for a mug and £49.95 for a teapot.  The range has more recently been expanded to include lots of cheaper non pottery items such as biscuit tins, trays, stationery and tea towels.

My first pieces of Emma Bridgewater were polka dot cake plates, a teapot and jug which we received as wedding presents.  I later added two (sadly discontinued) “Organic and Green” plates that my husband and I eat from for nearly every dinner and a 1 pint mug which says “I ? Farmer’s Markets” which sits on my kitchen windowsill.  Previously I had collected Cornish Blue Creamware and on moving house I agonised whether to switch to Emma Bridgewater mugs in my new kitchen.  The price put me off, I opted for Nigella Lawson Living Collection cream mugs instead which worked out £7.50 each.  But it was a poor decision, the mugs looked tatty after just six months of use, their matt surface showing multiple scratches.  Worse still, handles started dropping off.  We are back to using the Cornish Blue… unless I switch to Emma Bridgewater in the future.  It is tempting, although I didn’t buy any mugs today.

My son could quite easily have been a bull in a china shop, my dad took him outside with this red plastic basket for him to wheel around merrily in the courtyard.

I spent 20 minutes scanning the racks of Emma Bridgewater factory seconds which are sold here at around 25% discount. They mark items with a black chinagraph pencil to point out the flaws but seriously there is barely anything wrong with most of them and people would be unlikely to notice the difference at home.

Knowing that certain ranges quickly disappear, I opted for this season’s Union Jack design in a teapot and two side plates in Starry Skies .

We rounded off our trip with lunch at nearby Trentham Gardens and a rendezvous with my mother who was moored up a few miles away on her narrowboat.