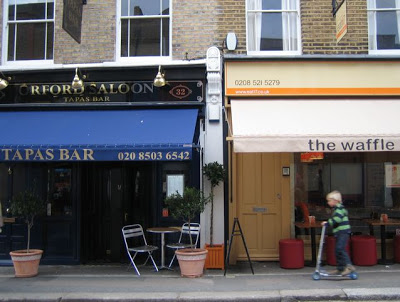 The eagle-eyed amongst you may have spotted that I omitted my Saturday Postcard last weekend. Since I was up until 3am working on the Arsenal birthday cake and baby shower cupcakes, I am posting this retrospectively at the same time as the Saturday Postcard for February 6th.

The above shot was taken in Orford Road, Walthamstow Village, a street which is almost unrecognisable since I moved here just over five years ago. One day I hope to do a full post with before and after pictures of my local shopping parade so you can see how much it has changed.

Back in late 2004, the above units were a run down Afro-Caribbean hair salon and a dusty shop selling old fireplaces and occasional bits of furniture. I bought a rather nice wooden dresser in the fireplace shop but it obviously wasn’t going to be the sort of place I used very much.  Fast forward five years and there is a successful tapas bar and the Eat 17 Bar and Restaurant, which at the time this picture was taken was known as The Waffle House.