Home » The Great British Bake Off fever reaches its climax 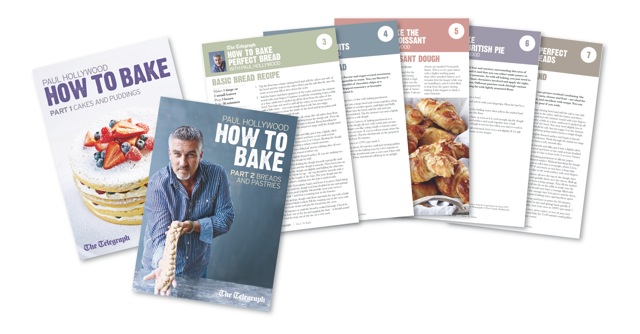 Paul Hollywood ‘How to Bake’ excerpts in The Telegraph

Those canny folks behind The Great British Bake Off have timed the series 3 finale to coincide with National Baking Week.  Keen to capitalise on Great British Bake Off fever, judge Paul Hollywood also has a promotion with The Telegraph happening at the same time.  Booklets featuring recipes from his book How to Bake and a series of five recipe cards will be given away with The Telegraph from this Saturday October 13th. Learn how to make breads, cakes, puddings and pastries with the silver fox himself. Full details can be found at telegraph.co.uk/paulhollywood 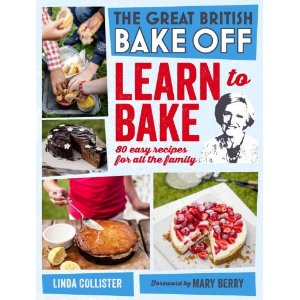 The Great British Bake Off ‘Learn to Bake’ book

I recently mentioned that series 3 of The Great British Bake Off had brought us an iPhone app and a third book to accompany the show: ‘Great British Bake Off: How to turn everyday bakes into show stoppers‘. Show creators Love Productions, understandably keen to wring every last penny out of the format have YET ANOTHER GREAT BRITISH BAKE OFF BOOK out already.

It might smack – pun completely intended – of over egging the pudding although I’m happy to report the new book is completely different to its predecessor. Apart from the title, it has no connection to the series.

After showy ‘Show stoppers’, ‘The Great British Bake Off: Learn to Bake, 80 easy recipes for all the family‘ corners the opposite end of the baking market. ‘How do you beat, fold or cream?’ asks the inside front cover, ‘how do you suck eggs?’ (I made that last part up incase this isn’t obvious.)

Once again workhorse Linda Collister plays second fiddle to Mary Berry who bags all the glory on the cover. Does anyone even know who Linda Collister is? Didn’t she present Changing Rooms? Yes I’m being cynical… but not as cynical as whoever designed the cover of last year’s book, ‘The Great British Bake Off: How to Bake’. The cover showed featured the best looking series 2 contestant serving a cake to Mary Berry even though he was never likely to win and his main claim to baking fame was dropping a cake on the floor.

Snickering aside, Learn to Bake is an attractive, unpretentious book – if not immediately obvious exactly who it’s pitched at. Certainly the health and safety section, with it’s warning to tell an adult you’re about to bake and you should scrub your nails first is aimed at kids. But this is no Cbeebies ‘I Can Cook’; apart from the lectures to tie your hair back, it’s a proper book. Learn to Bake goes right back to basics with descriptions of how to roll pastry out and advice that eggs and butter need to – gasp – be taken out of the fridge to make them room temperature.

Learn to Bake will make an ideal Christmas gift to teenagers who enjoy baking; there’s plenty of hand holding and tips for budding bakers along the way. A tick box wish list of favourites are included; brownies, flapjacks, jam tarts and various muffins. Followed by more ambitious breads, pizza and pastries and souffle.  It’s a safe baking journey past all the essential recipes I criticised ‘Show stoppers’ for lacking however it’s fair to say it’s not a book you need if you have many baking tomes already.  I don’t doubt though that this book will sell like proverbial hot cakes. A convenient release before Christmas will see Love Productions’ sales figures rise as reliably as one of Mr Hollywood’s loaves. 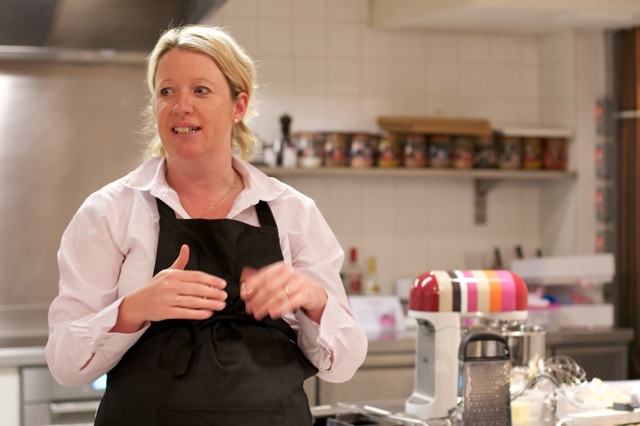 In other Bake Off related news, former Bake Off finalist Miranda Gore-Brown (above) recently tweeted she was meeting her publishers Ebury to discuss the follow up to her successful debut Biscuit. Fellow series one baker Ruth Clemens has not one but two books due out in April 2013.  If history repeats itself, the series 3 winner will follow in their footsteps. Let’s just hope this year’s winner doesn’t get another haphazard trophy made from a mixing bowl and wooden spoons.

And incase you’re considering escaping abroad to avoid Great British Bake Off madness, Australia, Belgium, Ireland, Poland, Sweden and now France are all countries running their own versions of the show.

Have you been watching series 3 of the Great British Bake Off? How do you think it has compared to previous series?