Home » When I went to Cybermummy (and won a holiday)

“Postcard from” is my occasional series of weekend non-recipe posts. 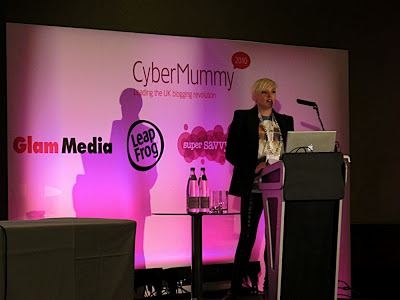 Sian of Mummy Tips opens the conference
I am a bit slow off the mark getting this post up about the Cybermummy day itself. I was going to include this material in my flapjack post but it was already very long hence it being posted today. Lots of other Cybermummy delegates will have seen similar posts to death but it will be new to my foodie readers.
Cybermummy 2010 was the UK’s first mummy blogging conference. It was held in a conference centre near Earl’s Court, London on 3rd July.  Around 180 mummy bloggers and many more brand delegates were in attendance.
Mummy blogging seems very different to food blogging, there is a tight circle of “faces” who accumulate around popular weekly events such as Sticky Fingers‘ photo event, “The Gallery” and Sleep is for the Weak‘s popular writing workshop.  Mummy bloggers are keenly targeted by brands hoping to get a favourable mention of their product to the point that British Mummy Bloggers’ Ning group were prompted to launch a self regulating code of conduct badged “British Mummy Bloggers do it with integrity”.  Having visited many of the blogs in the fortnight beforehand I was struck with how great a priority many mummy bloggers put on monetising their work. Compared to food bloggers, people seemed to be quite earnest about this, even with blogs in their early stages.
Although I only knew Heather and Alison before the day, everyone was very friendly and I made lots of new friends. 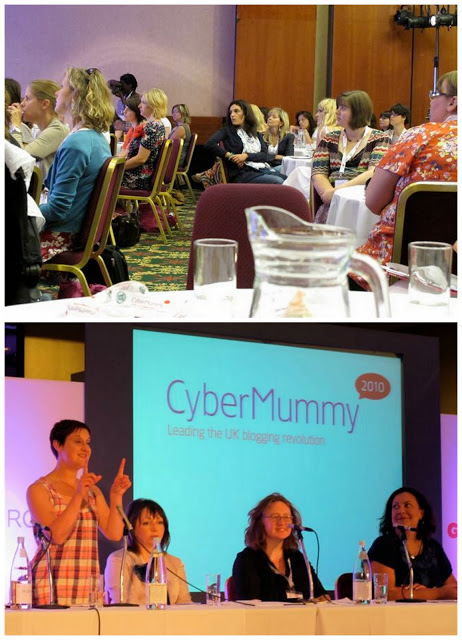 There were high profile speakers – India Knight (pictured above right) was one of my main motivations for going although actually she didn’t say a lot, a representative from BlogHer over from the States, someone from Mumsnet who started a bit of controversy (see this post).
There were even some high profile audience members – a certain baby food guru pictured right of centre top picture above.
My favourite sessions was the afternoon one on working with brands which explained the value that bloggers have to brands and how bloggers shouldn’t under value themselves. However the morning’s content session had been too thin on content for me and the session on understanding your audience and statistics was death by PowerPoint courtesy of someone from Google Analytics. 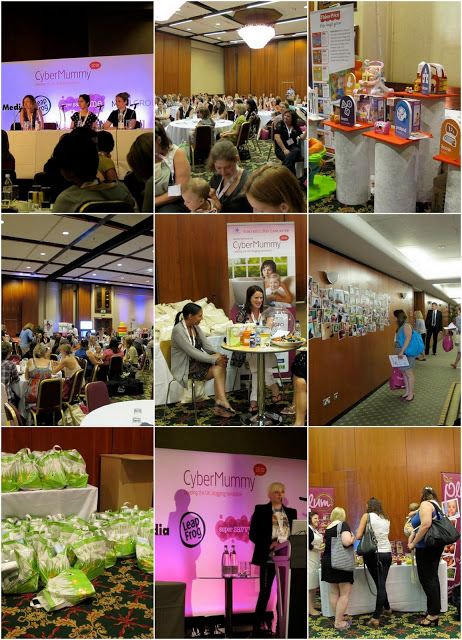 Not to worry, despite a couple of the sessions lacking depth, this was made up for by the enthusiasm of the delegates and liveliness of the main hall next door where we were served drinks and lunch and enjoyed looking at sponsors’ stands and bagging plenty of goodies. 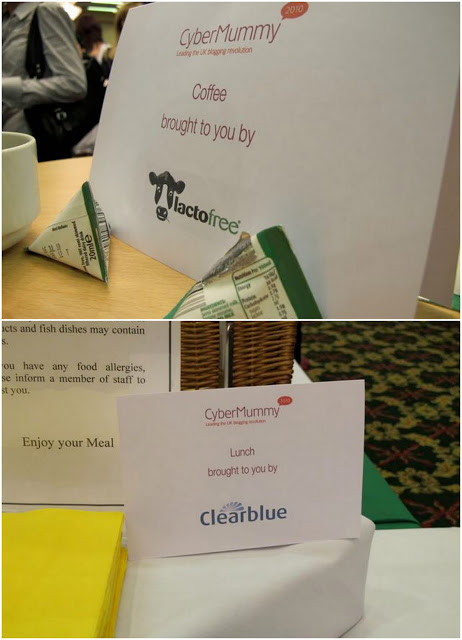 To me, the biggest strength of Cybermummy was the amount of brand sponsorship it had attracted. Every aspect of the day had been sponsored, from the tea breaks, lunch, the prize draw cards… even emails sent out prior to the day!  Lunch was sponsored by Clearblue which I found very amusing. 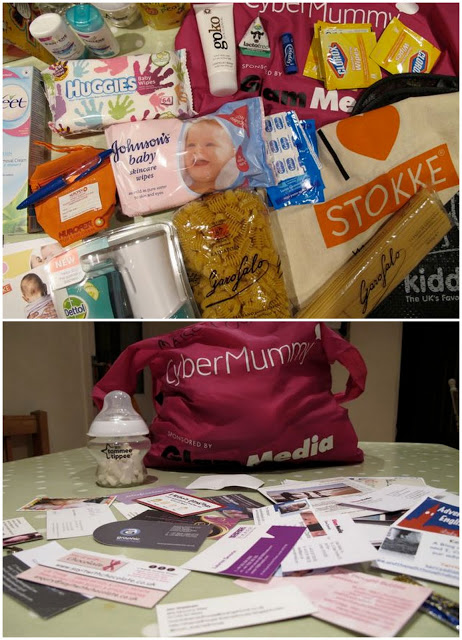 The downside of this sponsorship was that I was very weighed down carrying stuff home, thankfully 95% of the porridge and flapjacks were gone but I now had an enormous goodie bag containing everything from baby wipes and baby bottles to pasta and mascara. I’d passed by a lot of freebies – the Asda stall was over run with baby toiletries and Plum were giving out lots of baby food. I heard rumours of gin in some goodie bags but sadly there was none in mine!  It was quite overwhelming, although not as much as the prize draw at the end of the evening. 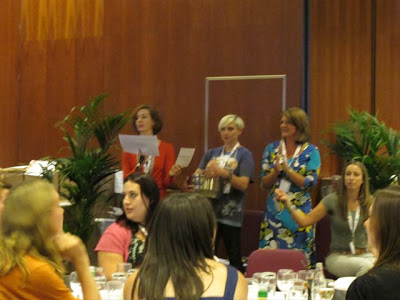 OMG… They’re calling my name!
Sponsors had provided around 80 prizes for a draw, these ranged from baby food, baby toiletries and dvds to more exciting things like digital photo frames, Toy Story 3 premiere tickets and then really big stuff like a £1000 Stokke buggy and er… 7 nights holiday at any European Keycamp Resort which I managed to walk away with.  Yes, you read correctly, I won the star prize, a holiday, so my husband is now extremely pleased that I went!
Whether I will go again next year, I am not yet sure but it was definitely an eye opening and motivating day and I applaud the organisers for all their hard work.

Many thanks to my sponsor Flahavans for making it possible for me to attend Cybermummy.
There is still time to enter the Flahavan’s giveaway…
To enter, visit and comment on this previous post before midnight BST Sunday 18th July 2010.