Today I am delighted to welcome my first ever guest recipe post from another Sarah at Scrumptious Sally.

Sarah was one of my earliest Twitter friends and she’s probably the only person I’ve come across who seems to remember even more obscure things from childhood than I do. Let me hand you over for an evening of sibling bickering, eighties tv and gravy… 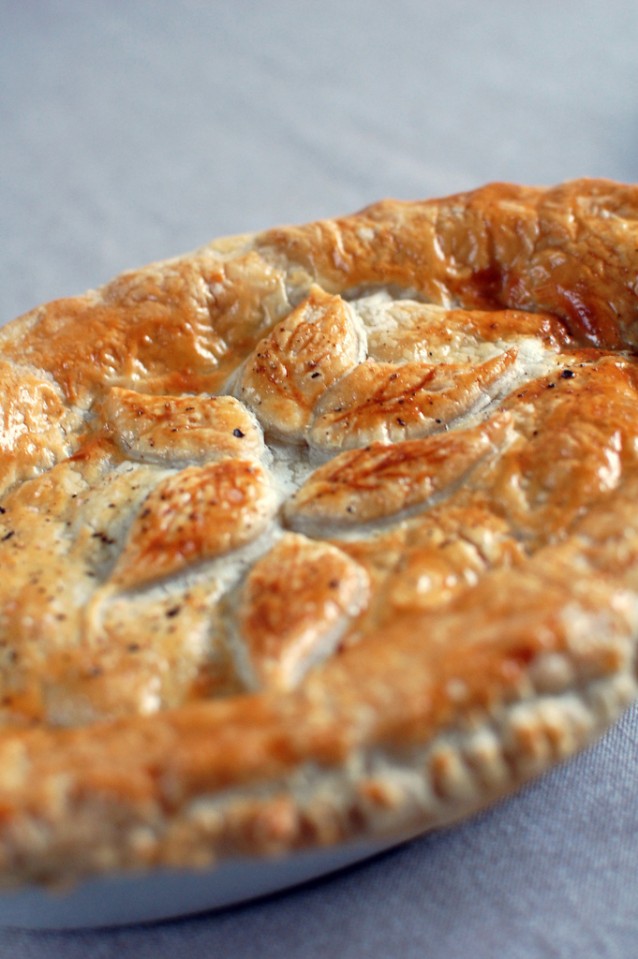 The family meal, if you believe the more tawdry newspapers, is a dinosaur.

It seems to be accepted that this is A Bad Thing, and that families who eat together, stay together. This belief is also found on British television, notably via the Oxo family, themselves now extinct. 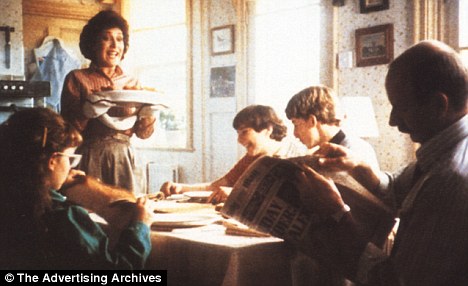 As a member of the demographic so often scourged by the Daily Mail, I wonder how women who work, commute and keep house (in Tabloid World, men do not help with housework), are also meant to put a home cooked meal on the table every night and make pleasant conversation with those around the table, who’ve contributed sod all to the effort.

The notion that families are going to break up if they don’t eat a ‘proper’ meal in the same room at the same time is rather quaint propaganda.

The reality for the families that I know with young children, is that parents take turns on making the evening meal, depending on after work schedules, play dates and who wins the argument about who is more knackered that evening. Tummies fed, baths had, children go to bed content.

Family meals were difficult enough in our house – with a mother who didn’t work during the week and a dad home by six. My sister and I were not bad children, but we were, challenging.

Had our mother worked full-time and endured our ungrateful whining, I may instead have been brought up by wolves in Epping Forest from the age of seven. 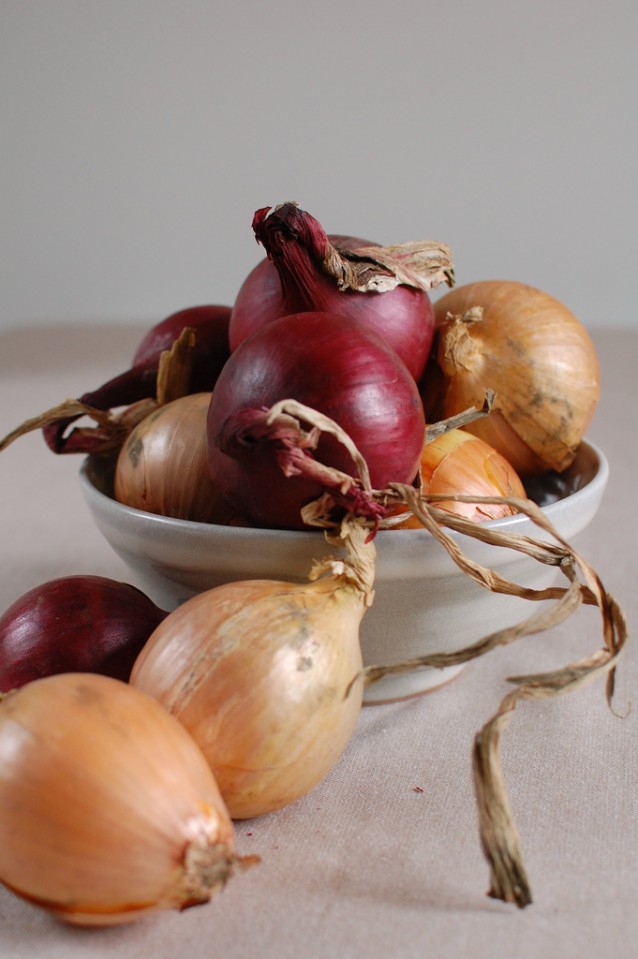 The Battle of Tea and The Timing Thereof

At friends’ houses, tea was served at half past five, after changing out of our school uniforms, doing homework and watching some television.

In our house, tea was on the plate at half past four, only three hours after we’d had our lunch and three whole hours before we went to bed.

Mum made us sit at the table for a full thirty minutes before tea was ready to be dished up and then made us do piano practice straight after. About once a week, I’d make a futile effort to change the order of things, by presenting a logical proposal for getting piano practice out of the way, in the 30 minutes that we were spending sitting at the table.

My mother was one of the most proud, stubborn people on this living earth, so even if she saw the sense in my proposal, the fact that she hadn’t thought of it herself, meant it would never happen.

The Battle of Actually Sitting At The Table, Not In Front of The Television

Because of the unfeasibly early teatime set for us, we had to be in the kitchen at the precise point that the best children’s TV was starting; a major cause of resentment and carping.

Missing Danger Mouse was bad enough but being unable to discuss Grange Hill in the playground next morning was miserable; the nadir being missing Danny Kendall dying in Mr. Bronson’s car.

Getting us to eat whatever was on the plate with less than a look of fear or repulsion, was a major victory. My sister had the reputation as a fussy eater in our house but really we both were.

Now needing to manage my own food budget, I realise I was lucky to receive a hot meal every night. Unfortunately, I didn’t have this hindsight when struggling with a gargantuan pile of cabbage and bacon, or chops.

Oh God, the chops. Our house didn’t ‘do’ pork, because mum declared it “difficult” to cook, so the chop of choice was lamb.

I loathed, despised, abhorred lamb chops. Unyielding, pallid meat refusing to break down on chewing, or conversely, a steadily forming pool of blood, that menaced my beloved mashed potato. I struggled in vain to make a moat with a hastily formed barrier of carrots.

Chops were expensive, as I was often reminded when discarded half-eaten ones was found in the dustbin/school skirt/neighbour’s rabbit hutch/toilet. Their cost didn’t stop me feeling ill.

Sausage, mash and gravy, was a much better prospect, even if not worth missing Byker Grove for.

Even though they were our favourites, sausages were only served weekly. They were the shiny plastic kind that we happily bought before food gentrification took off.

Mum’s gravy was the business. Bisto-based, but onions were put in the oven with the sausages and used as the starting point, along with water strained from the vegetables and a dash of Lea & Perrins.

As Chief Gravy Whisker I was not allowed to stop whisking for a second, lest it descend into lumpy hell. 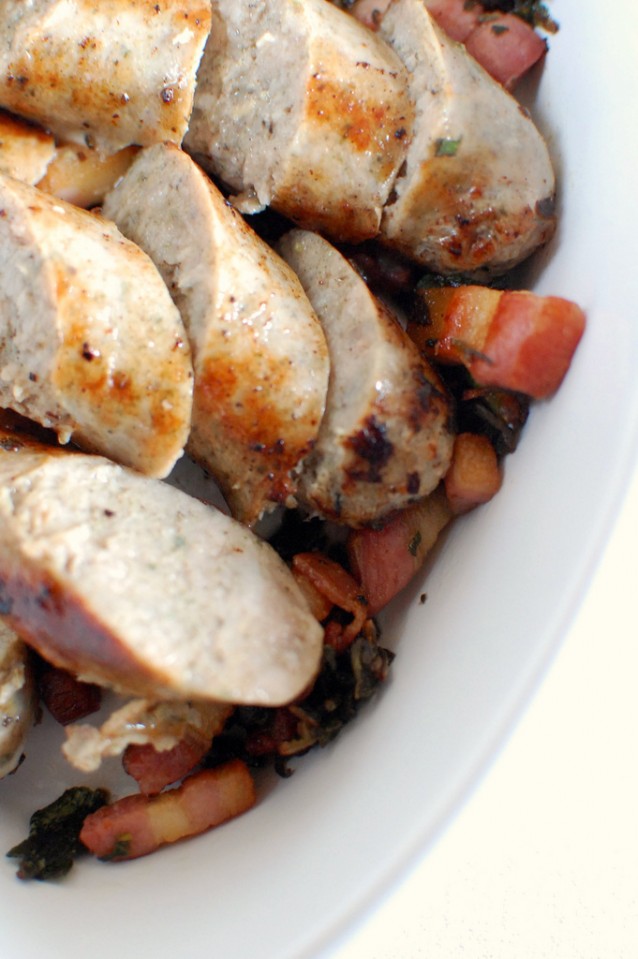 The Battle of The Washing Up

Tasks in order: wash, dry, put away, clean surfaces. The washer up-er did the putting away. The dryer washed down the surfaces.

Admittedly, this order does not make as much sense as the dryer putting things straight in cupboards. Sense and order didn’t get a look in at our house. Thus, the washer was first to leave the kitchen.

With mum absent by this point and still ten minutes of Grange Hill to go, the fight to wash up and escape first was vicious. Hair pulling, pinching and kicking were deployed to establish dominance.

Cries of pain swiftly muffled with damp tea towels, I’m sure my mum heard everything, only by now she gave in and put her feet up.

I don’t know how she, or any other parent, mustered the energy to pitch these battles every single day. Happily gravy overcomes all. If your child doesn’t like gravy, consider testing their DNA, just to make sure that you don’t need to leave them to the wolves.

With thanks to British Onions for their “gravy in a box” kit of condiments. 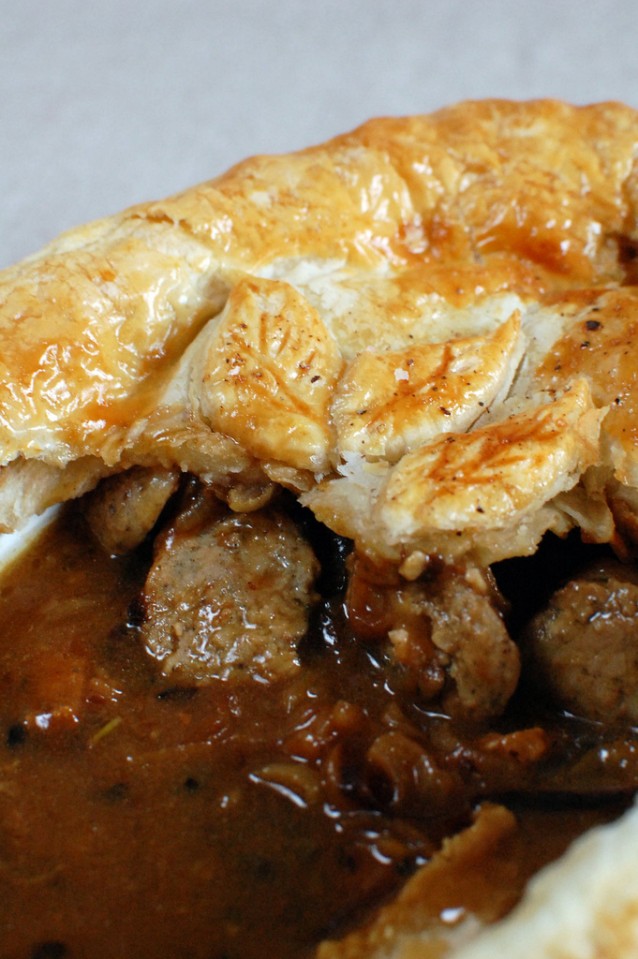 Ingredients
For the bulk of the pie
Olive oil
1 stick celery, finely sliced
75g bacon lardons, unsmoked
10 leaves of sage, finely chopped
2 thyme sprigs, one left whole, reserve leaves from the other as garnish
6 Lincolnshire sausages
Salt and pepper
1 medium egg, beaten
Rough puff pastry, home made (I use a half portion of the British Larder’s recipe; here) or shop bought

You will also need a pie dish approx 23cm diameter and a heat proof roasting tin.

Directions
1. Preheat the oven to 220c / Gas Mark 7. Have your pastry rolled out, but refrigerated until the last minute.

2. Slice the onions as finely as you can (I use a mandolin) and in a large bowl, coat them with one teaspoon of the oil, a pinch of salt.

3. Spread the onions in the roasting tin and sprinkle the sugar over the top. Put the sausages on top and bake in the pre-heated oven for 10-15 minutes, until the sausages are browned and onions are charred.

4. Meanwhile, warm the olive oil in a frying pan over a medium heat. Gently fry the celery, bacon and one sprig of thyme until fragrant. Increasing the heat slightly, fry until the bacon and sage crisp up.

5. Remove from the heat. Once the sausages and onions have browned, remove them from the oven (the onions may need a few extra minutes on their own). Slice each sausage into four rounds and add to the bacon mix. Turn the oven down to 180c / Gas Mark 4.

6. To finish the onion gravy, stir the Worcester sauce into the stock and place the onion tin over your largest hob on a medium flame. Add the remaining oil and as the onions start to sizzle, gradually whisk in the stock. Then reduce the heat and stir with a wooden spoon for around five minutes.

7. Transfer the sausage mix into the pie dish. Slowly, pour over enough gravy to come around a third of the way up; it shouldn’t be too sloshy).

8. Quickly cover with the puff pastry. Trim and crimp the edges to form a seal, glaze with the beaten egg. Sprinkle with remaining thyme leaves and seasoning. You can decorate the top with bits of cut out pastry if you wish.

9. Bake for approximately 20 minutes. Serve with the reserved onion gravy and some greens. 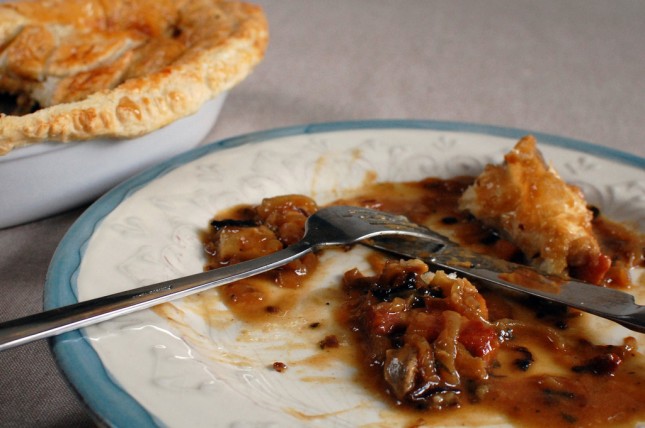 « Review: Got a Crussh on you…
Gwyneth Paltrow turkey burgers »