These dulce de leche brownies are so gooey and are the ultimate chocolate caramel treat. 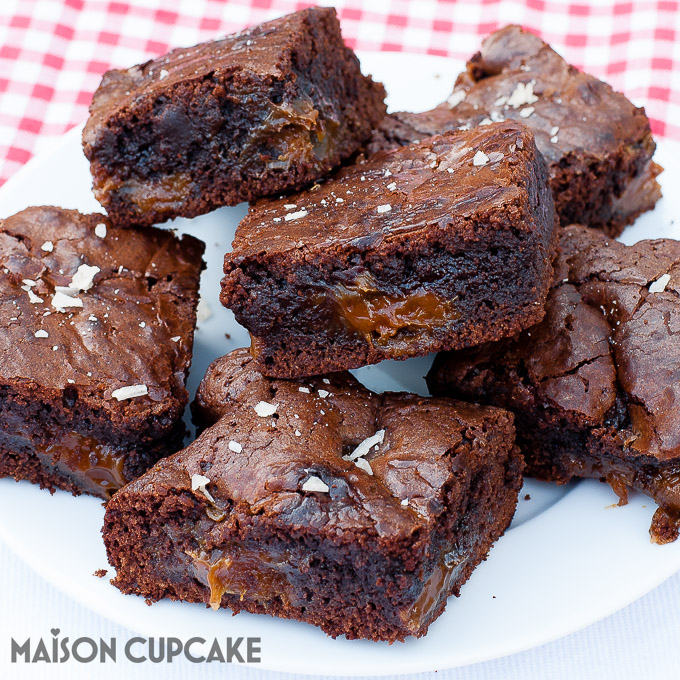 I often refer to myself as “the brownie police” for I am rather fussy about what makes the perfect brownie. Some people like brownies with nuts although my preference is damp squidgy brownies without nuts.

So when I was in the presence of these dulce de leche brownies with caramel oozing out I knew they’d be up to my standards! 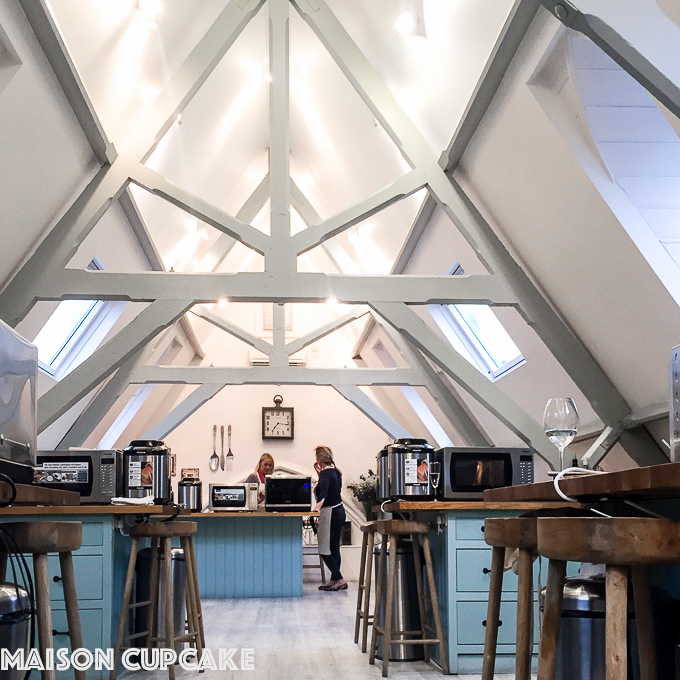 We were baking dulce de leche brownies (amongst other things) at the airy Cactus Kitchen in Clapham, south London – home to studios for BBC’s Saturday Kitchen and a cookery school run in partnership with BBC Masterchef judge Michel Roux*. 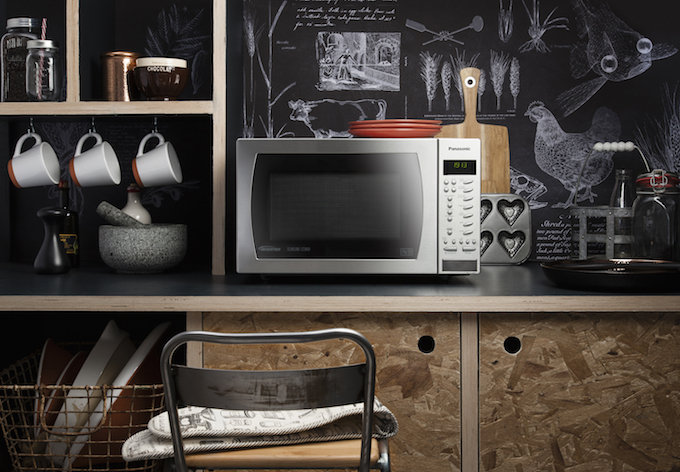 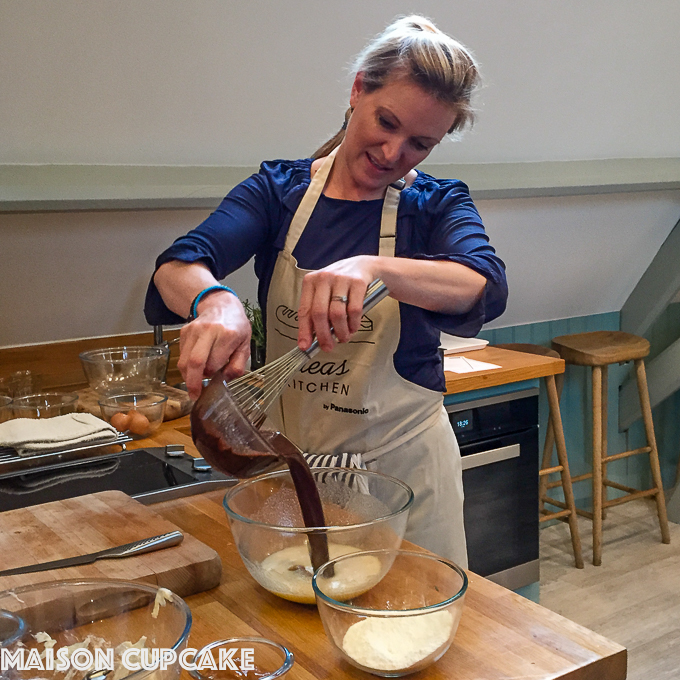 And our star teacher for the evening was none other than Ballymaloe Cookery School’s Rachel Allen*. After she’d demoed the technique for the brownies she was on hand at every work station for a chat and giving us tips. Rachel taught me how to crush garlic with the blade of a large knife and I have to tell you it was so effective I felt myself warding off vampires for 24 hours afterwards. 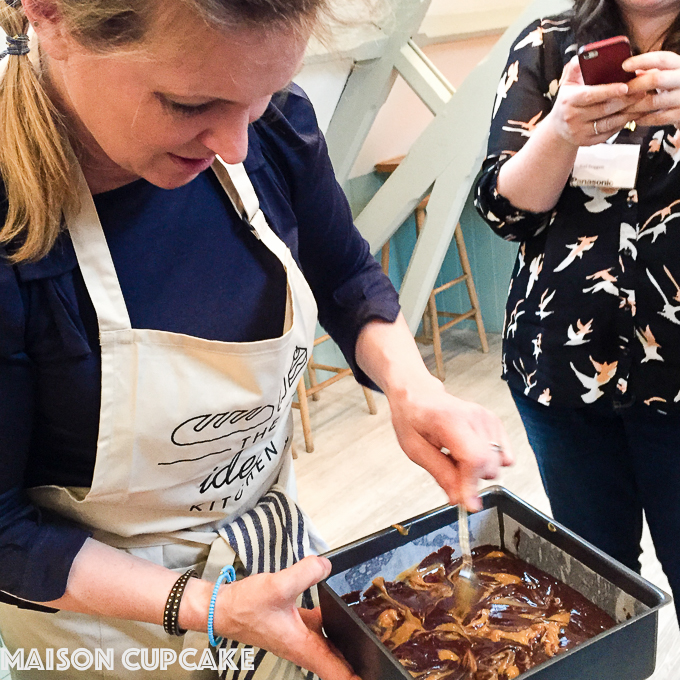 Normally I would use a double boiler to melt my chocolate but Rachel’s recipe said to put it in the microwave together with the butter and cocoa powder. Microwaving chocolate has not been ideal in the past as hot spots burn quickly but it seems microwaving chocolate together with butter avoids this as the mass quickly liquifies. Nevertheless at home I covered the jug with pierced clingfilm and opted for 2 mins blast with 1 min standing time rather than 3 mins as in Rachel’s instructions. The brownie batter had dulce de leche swirled in it in large globs before being baked. 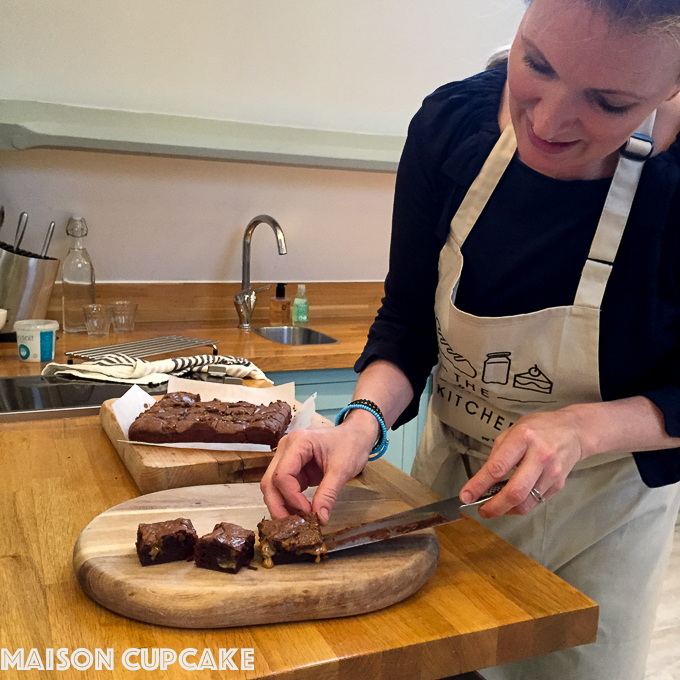 As you can see, after the dulce de leche brownies were baked, the caramel sauce is still oozing out nicely. 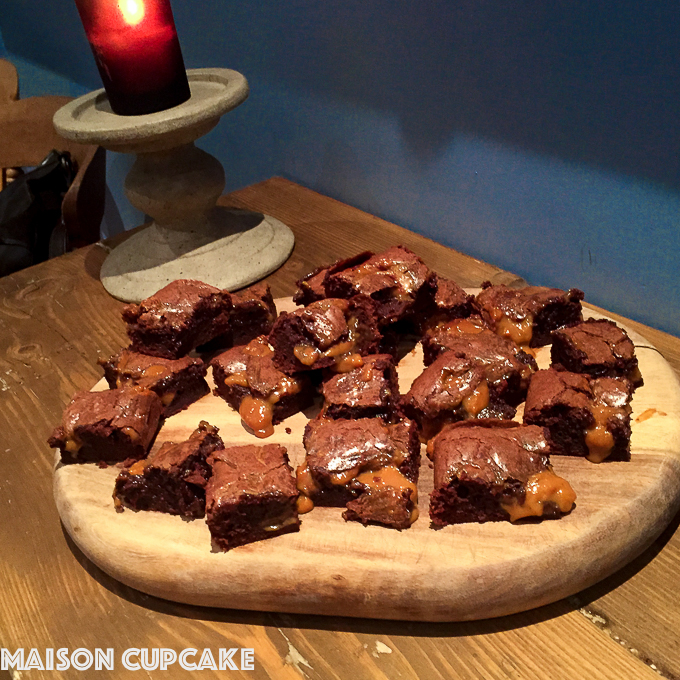 Here are Rachel’s on the night. 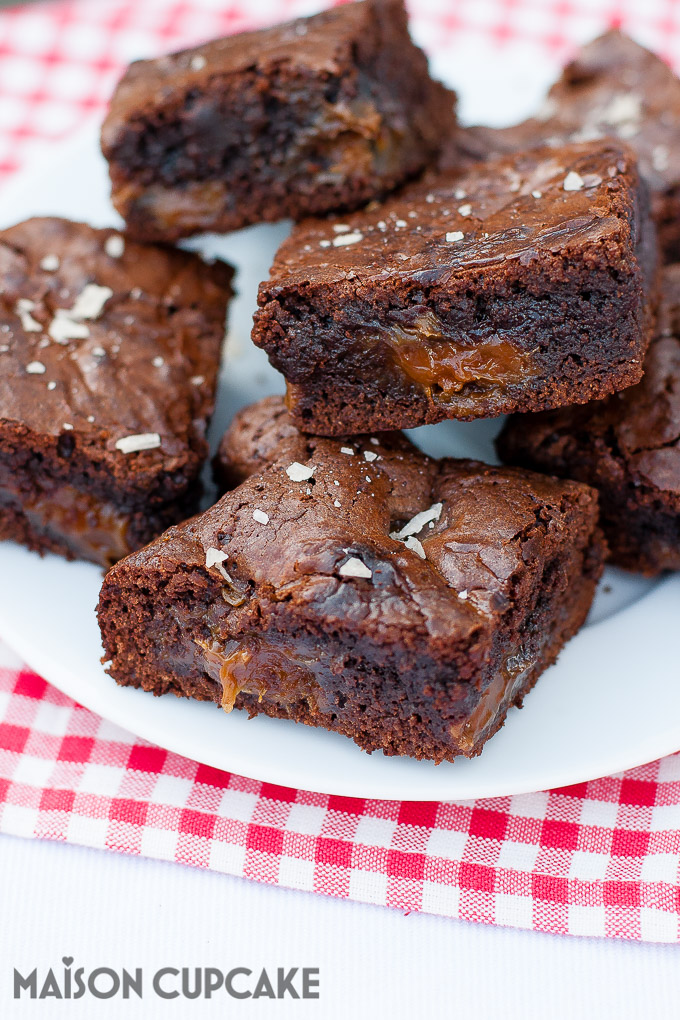 And here are mine made at home afterwards! I’ve added a sprinkling of cracked smoked sea salt by Falksalt* too. 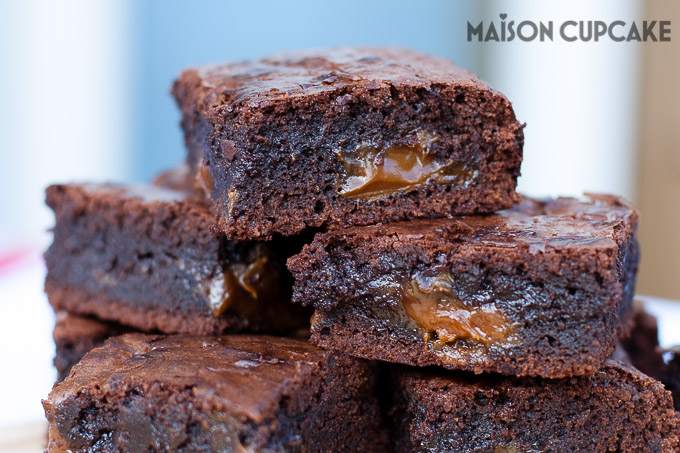 You’ll find the recipe for these decadent dulce de leche brownies below but first let me show you what else we prepared in Panasonic’s combi microwave oven and their latest bread maker. 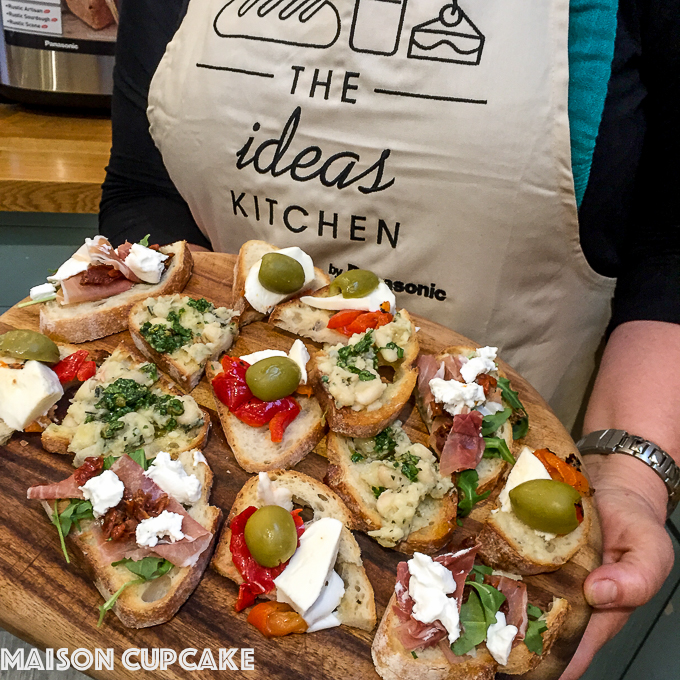 Focaccia bread dough was mixed in the bread maker and then finished off in the combi microwave oven. Here is the focaccia sliced up and topped with anti pasti style toppings. 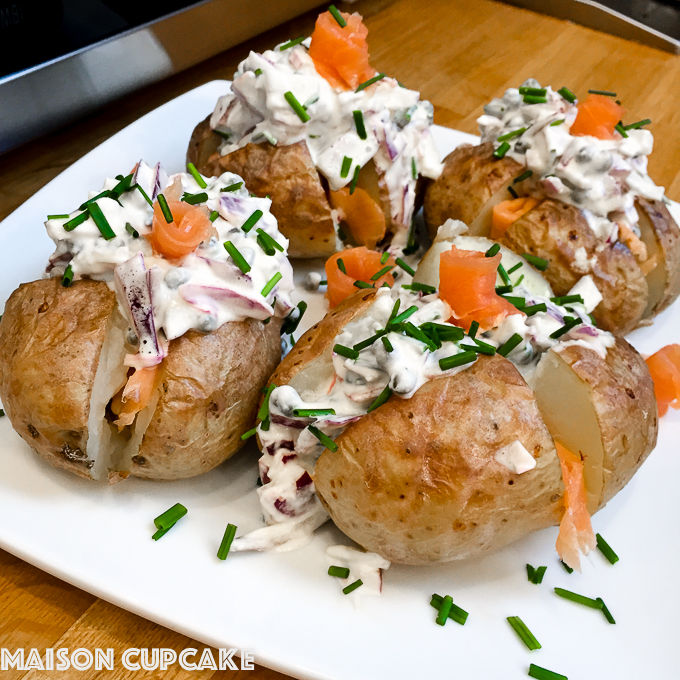 These jacket potatoes with smoked salmon and chives were baked in the combi microwave oven giving them crispy skins and soft floury flesh. Obviously the type of potato you use makes a difference but honestly these were the most wonderful jacket potatoes I’d ever had and I’d never have believed they’d been done in a microwave if I’d not known. 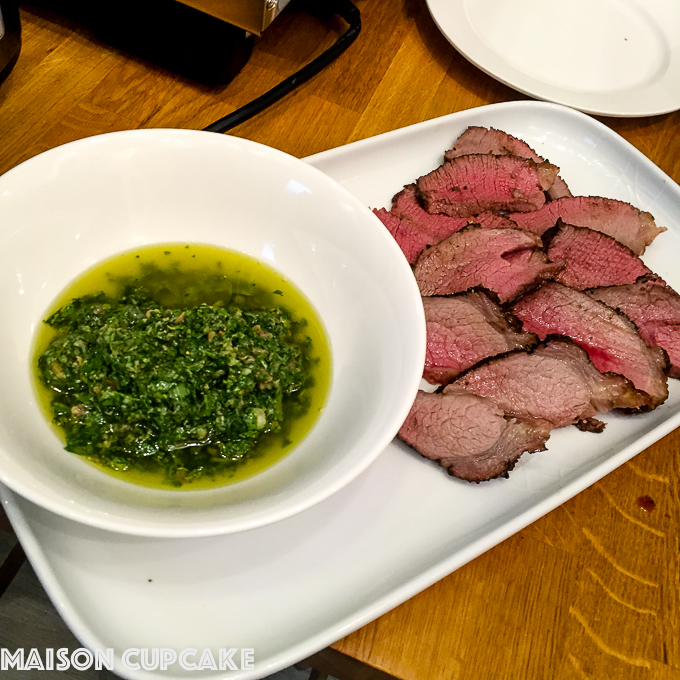 And the piece de resistance. Roast beef in the combi microwave oven and salsa verde. Sunday roasts will never be the same again. A piece of beef was rubbed with olive oil and salt and pepper and put in the combi microwave on the “beef” setting for forty minutes. When the microwave went ping the beef smelled amazing with a brown crispy skin as impressive as any I’d seen done in a traditional oven. As you can see, the meat was done medium rare to perfection and was beautifully juicy. 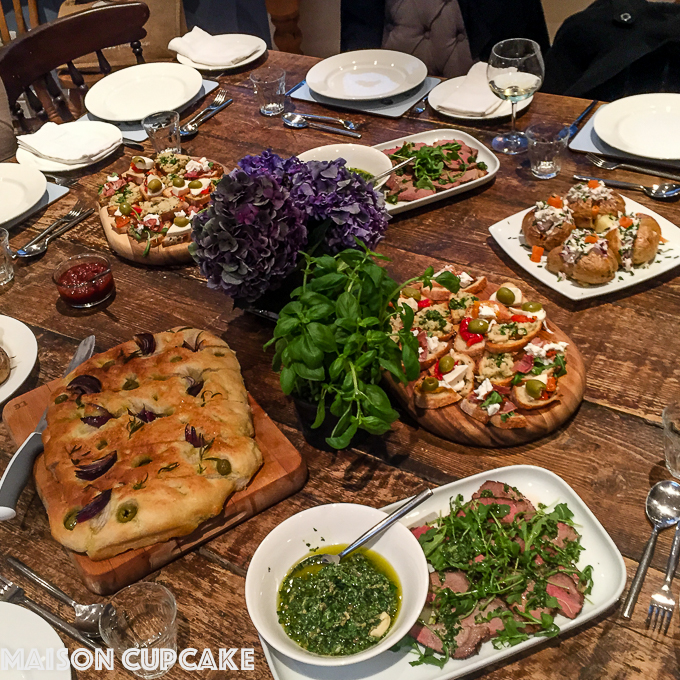 It was hard to believe that everything had been made partly with a microwave! The combination function allowing you to part bake and part microwave adds flexibility to cooking and I can’t wait to try it out myself at home. Have you ever used a combi microwave oven? 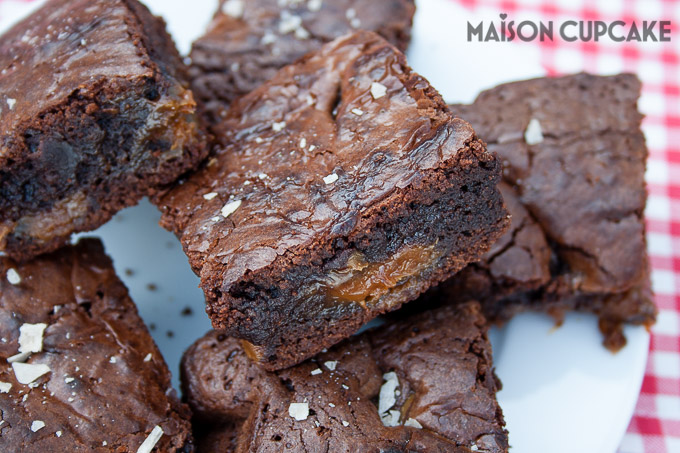 Print
Prep time
10 mins
Cook time
25 mins
Total time
35 mins
These dulce de leche brownies are so gooey and are the ultimate chocolate treat. *Editor note - 2 mins to microwave the chocolate plus 1 min standing time proved adequate when testing in my home kitchen. Be sure to cover the jug of chocolate/butter with pierced clingfilm to avoid spitting and messing up the interior of your microwave!
Author: Rachel Allen for Panasonic Ideas Kitchen
Recipe type: Baking
Serves: 16 squares
Ingredients
Instructions
3.4.3177 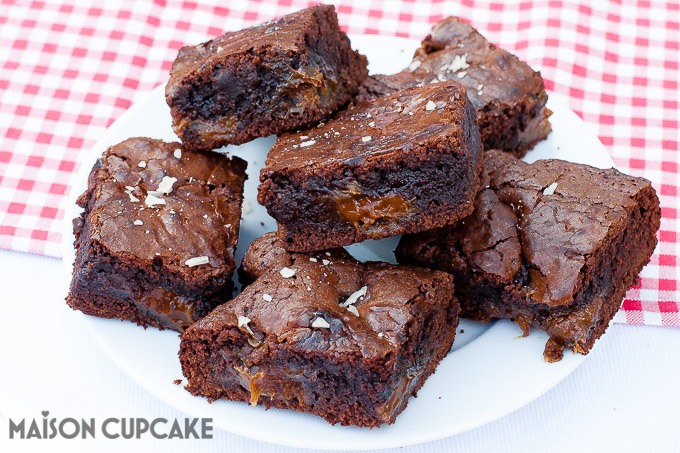 Three ingredient caramel apple croissants by Emily at A Mummy Too

Caramel and biscuit cake by Michelle at Greedy Gourmet 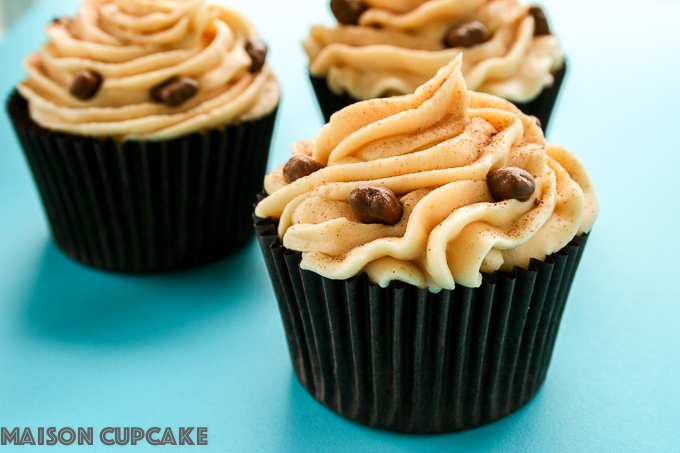 *Affiliate links are used in this post. With thanks to Panasonic who are giving me one of their combi microwave ovens to review in a later post. Dulce de leche brownies recipe by Rachel Allen for Panasonic Ideas Kitchen reproduced with permission.