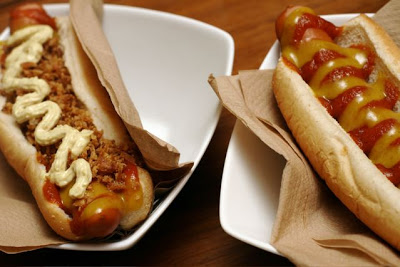 I’ve often thought that relationships only survive visits to Ikea because men look forward to the hot dogs on the way out to the car park. However, it wasn’t until my trip to The Scandinavian Kitchen in the West End last week that I discovered that this wasn’t just a final money-grabbing ruse by the furnishing giant but that our Nordic friends have a genuine passion for them.

Helen from A Forkful of Spaghetti has been running some food photography sessions in conjunction with professional photographer Chris Windsor and The Scandinavian Kitchen . After hearing about this on Twitter, I was fortunate enough to attend alongside fellow food bloggers Claire of Things We Make , Lucy of TV Dinners , Kelsie of Travels with My Fork and non blogger Carolyn (we tried to persuade her to start one).

The Scandinavian Kitchen was opened a few steps from Oxford Circus by Swede Jonas Aurell and his Danish partner two years ago after they tired of having nowhere to buy decent rye bread in London. Their deli sells a wide range of Scandinavian foods and serves smorgasbord open sandwiches, cakes and of course the ubiquitous hot dogs.  It’s become a home from home for ex pats and the basement toilet is even decorated with Abba posters.

One of my pictures before I had put my new knowledge into practice.

The five of us were all digital SLR camera users, separate sessions had been run for “point and shoot” users. For the first half of the session Chris helped us familiarise ourselves with features we could adjust on our cameras such as the strength of the flash and focus points.  Although I have taken thousands of photos in my time and feel I have a reasonable eye for composition, I would never describe myself as a technically skilled photographer.  I have dabbled with the dark room on my art foundation course a long time ago but most of my pictures have been taken with a point and shoot Canon Ixus and the arty Lomo.  We’ve always had an SLR and bought a digital version 12 months ago but through laziness I have left fiddling about with dials to my husband whilst I prefer to flash my vastly inferior 3.6 megapixel mobile phone at things before he’s even got the big camera out of its bag.

Recently though, I have been so enchanted by the food photography on blogs such as Mowielicious and Tartelette that I really wanted to raise my game a little. No more blurred efforts making do with the mobile phone. No more pictures aimed at the cake still in the baking tin sat on top of the cooker. 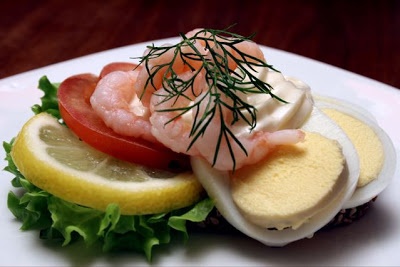 Egg and Prawn Smorgasbord that I became very familiar with.

To the bemusement of fellow diners we were let loose on several plates of open sandwiches and hot dogs.  There is apparently a competition taking place for the best picture of a hot dog.  I tried to make mine look like something Martin Parr would be proud of but it was very hard.  It was quite dark in the cafe, we had a bright fluorescent light but even with this pictures easily looked dark.  Although it is desirable to get the best shot you can in the camera, it is acceptable to tweak food photography with applications such as Aperture and Photoshop.  My husband is a graphic designer so I’ll probably leave an complicated tweaking to him.  In the meantime, the only changes I’ve made to these images has been a single click on the iPhoto “enhance” button which has the pleasing effect of making plates look whiter and brighter and food look deeper in tone. 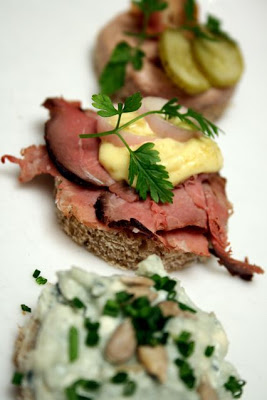 Practicing focussing on specific parts of a shot. 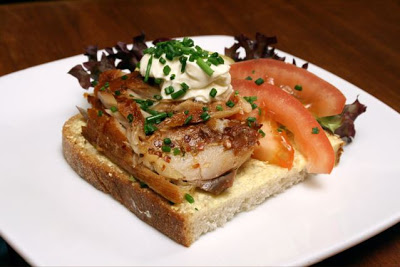 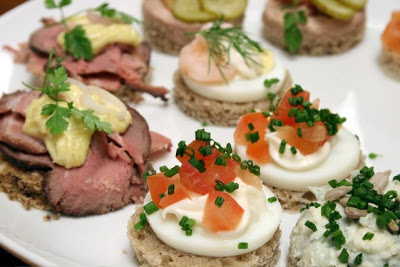 The white spaces on the plates got bigger as we started to tuck in…
I am looking forward to seeing if I can improve my pictures taken at home. Bearing in mind everything I learned on this session I am taking a lot of notice of other food photos and hoping to replicate more of the good and less of the mediochre.  Whether this means I have to take all my pictures outside and eat my dinner at 4pm before the daylight disappears remains to be seen.  I will let my readers be the judge of whether my photos are any better and would be interested to see what you think.