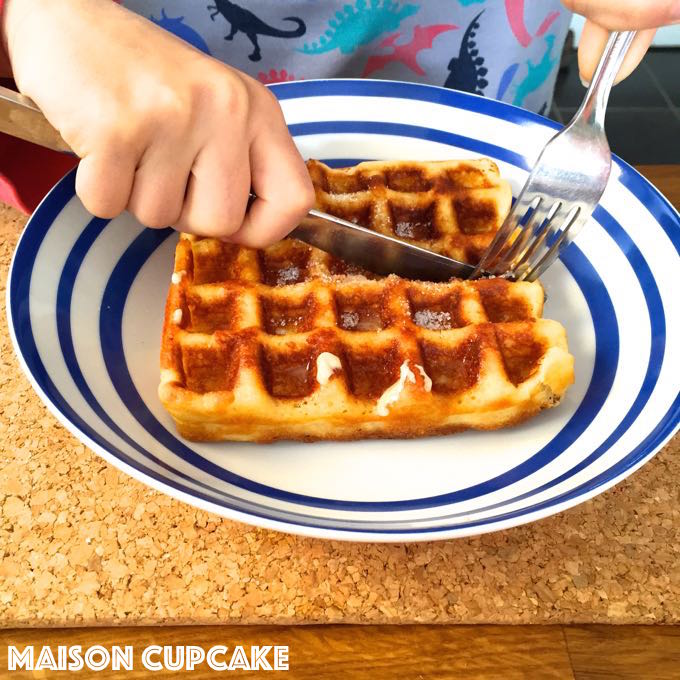 If you’ve visited Belgium you’ll know the air is thick with scent of waffles cooking. The warm fluffy golden waffle is the traditional street food of Belgium. These square grids of batter are cooked on a moulded hot iron in cafes and on street corners. Imagine a crepe in 3D form and you’re not far away from waffles. And the good news is that this treat is easily adapted for gluten free diets.

The square holes in Belgian waffles are perfect for soaking up sauces and syrups. Often Belgian waffles are sold with large crystals of sugar embedded into their crust. The ones on the street tend to have rounded edges rather than be perfect squares. Served hot or cold you can enjoy sweet Belgian waffles with ice cream, maple syrup, Nutella, yogurt, fruit purées and chopped fruit, nuts or sweets as garnish.

Ted however preferred his Belgian waffles unadulterated simply served with melted butter and sugar. You can see what I put with mine below.

Whilst we’re not on strict gluten free diets, I was keen to experiment whether gluten free waffles would work as well as non gluten free ones. I’m pleased to report there was no difference at all and our Belgian waffles made in the Sage waffle maker we’d been sent to review were a big success. 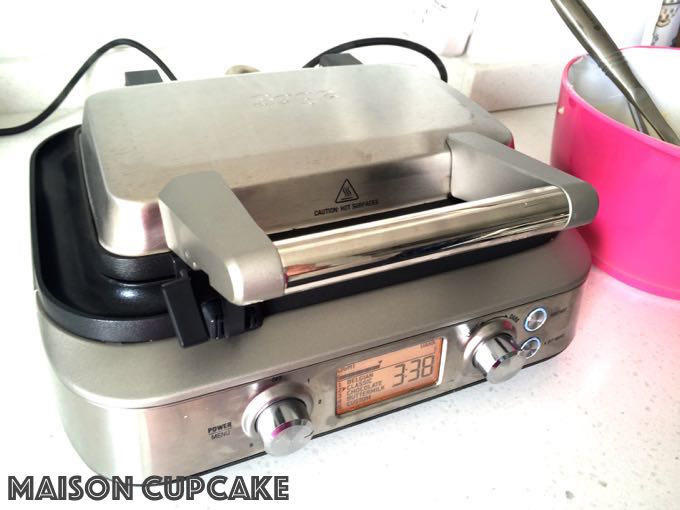 What it does: Cooks two square waffles in around four minutes. Has settings for classic, Belgian, chocolate and buttermilk waffles.

Practicality: This Belgian waffle maker is around the same size as a large sandwich toaster. It’s easy to pick up and put away in a cupboard and get out when you need it whilst its brushed metal good looks are great left out on display.

Best thing: Unfaffy. Waffles on the table in less than ten minutes. How the waffle maker sets the timer according to which type of waffle and how brown you want them.

Worst thing: Rather like pancakes, there’s a lot of sitting around waiting for them to be done. You can only do two at once. Typically around 4 minutes per pair of waffles. The good news is the machine requires no babysitting so you can use the interval to make tea (or get dressed).

Would we buy it? This is a fun gadget to use rather than an essential one. It depends on how often you imagine eating waffles. There’s very little prep time so there’s no excuse to leave this Belgian waffle maker languishing in the cupboard. As well as waffles you could make mashed potato fritters or brownies in it. There are far cheaper waffle makers available but the clever feature of the Sage model is the overflow trough for batter meaning less mess (and a cook’s treat to eat as you go along!). 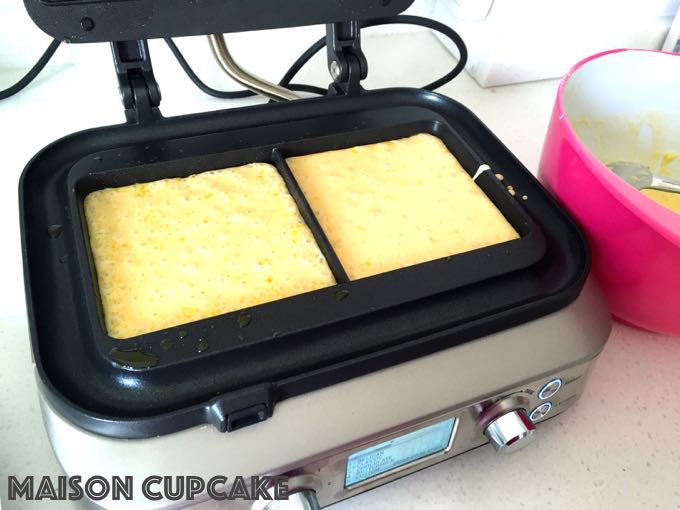 If you do not wish to make gluten free waffles then you can use ordinary self raising flour in this recipe. 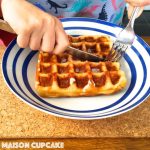 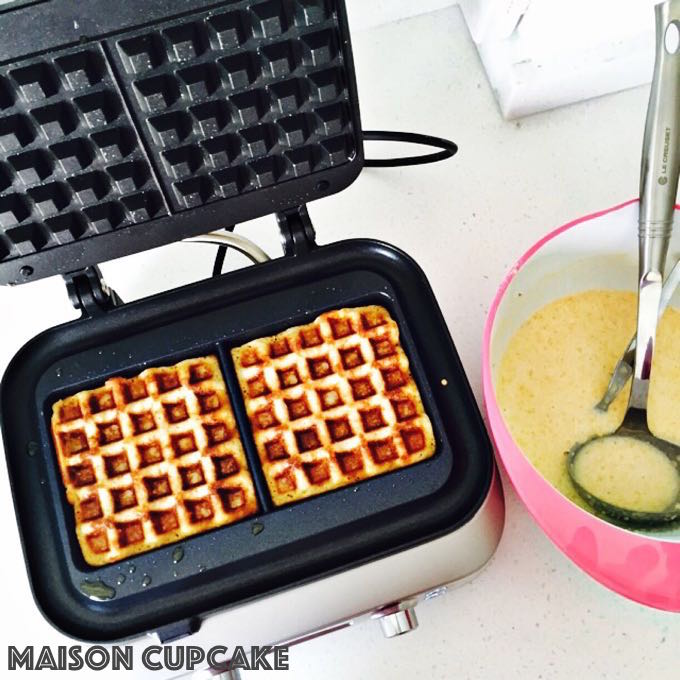 These gluten free waffles are my entry to the relaunched Breakfast Club event. Breakfast Club was originally started by Helen at Fuss Free Flavours and has been dormant for a while but will be revived and hosted by myself and Andrea from Made With Pink who is hosting the first new month. 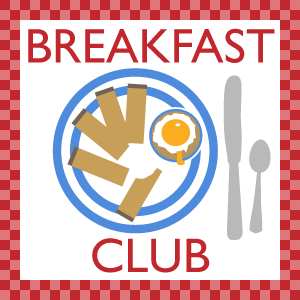 We’re accepting any breakfast dishes each month without a particular theme to them but please make sure it’s a fresh breakfast post from the current month. (We’ll accept those from April for this first event since you’d not had warning!).

Some more waffle ideas can be found at:
Gluten free lemon poppyseed waffles Made with Pink
Cinnamon waffles with caramelised apple A Mummy Too
Black forest waffles Elizabeth’s Kitchen Diary 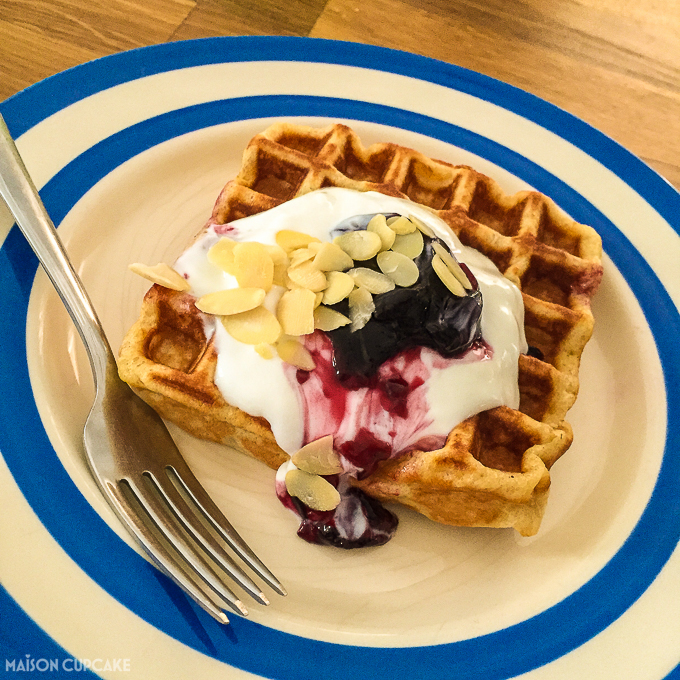 Ted had his gluten waffles served simply with butter and sugar. I had mine with yogurt, blackcurrant gelee by Bonne Maman (bought on holiday) and some flaked almonds.

What did you have for breakfast today?

With thanks to Sage for providing the waffle maker for review.