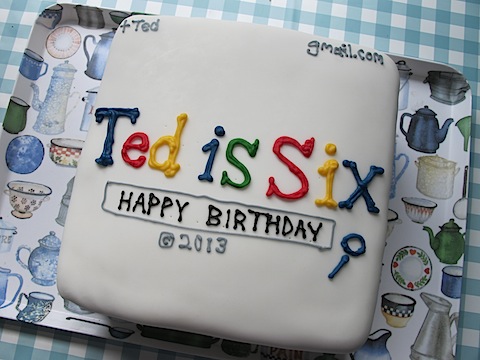 Every year I swear I won’t still be decorating Ted’s birthday cake during the party and this year I finally managed it.

Surprisingly, this was his most complicated cake yet since I tend to duck out of pressure when I am my own client. Last year I was delighted he simply requested a cake covered in Smarties. You want Smarties cake? Certainly my dear, you got it.

This year my trainee geek got a little more demanding.

“I want a Web Lab cake” he kept saying. Chrome Web Lab is an educational Google project that lets you take a picture of your face on a web cam whilst a pendulum over sand live in London’s Science Museum translates this into a drawing of your face. You can also play xylophones in the Science Museum remotely over the internet. It’s pretty cool.

I wasn’t sure how to translate a Web Lab cake so we compromised on a Google cake. I don’t think many six year olds ask for a Google themed birthday cake although I see umpteen mobile phones and play stations around. A Google cake it was. 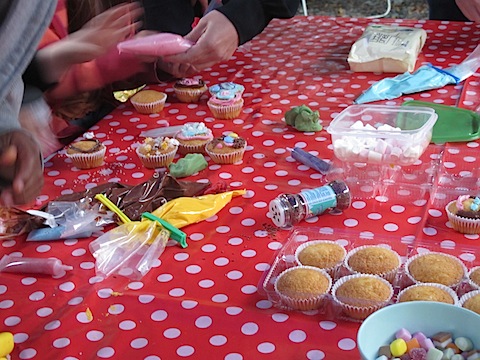 There was also a cake theme to the kids’ activities at the birthday party. Ten five and six year olds decorating cupcakes in the garden under a gazebo!

Everyone had a mini tray of four cupcakes to decorate and take home. I lined up bags of coloured buttercream secured at the other end with clippits and many many bowls of sprinkles.

Of course there had to be one kid who hamster cheeked his cupcakes no sooner than he’d decorated them. Of course.

But most children proudly took their creations home in spotty cardboard boxes at the end of the party. I got Helen to decorate four more for the pint sized cupcake scoffer to take away. 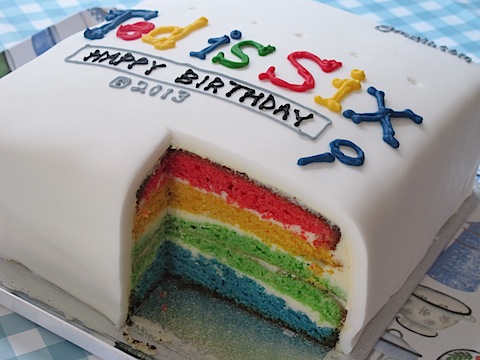 Decorating Ted’s Google cake was very straight forward. The cake was simply covered in white sugar paste (what a joy not to have to knead gel food colouring into 1kg of sugar paste!) and iced with letters in primary colours spelling “Ted is Six” Google style. Next year I might even manage to present his birthday cake on a proper board but when it’s for yourself it feels a waste of time and money.

All the main action was going on inside the cake. I baked four layers in four colours. It all turned out ok in the end, but I was tempted to bake the whole thing again from scratch as I was going along.

My layers were lumpy. The bases of the cake layers were rather brown (I’d done them in pairs Battenberg style, at least that’s how we baked Battenberg at school 25 years ago). I sort of squashed it all together and evened it out with vanilla buttercream.

Like I say, when I’m my own client I’m not very fussy. If I’d been selling it I’d have been panicking.

But you know what? I need not have worried. Everyone thought it was fantastic. Especially Ted. And Nick’s graphic designer colleagues thought it was rather awesome when they were dished up a chunk of it in the office the next day.

Sometimes we’re too harsh on ourselves aren’t we? 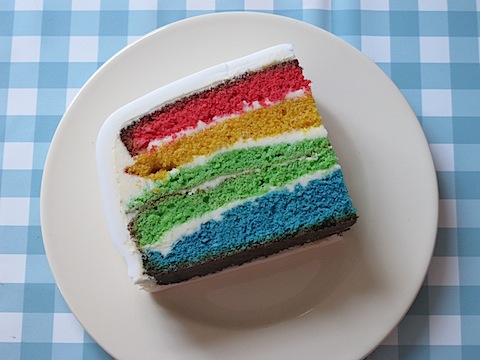 To make this Google cake I simply mixed two sponge batters each made with 250g butter, 250g caster sugar, 4 large eggs, 250g self raising flour. Then I divided each batch into two and coloured the four batters with red, yellow, green and blue gel food colouring. The buttercream was made with 250g butter, 1 tsp vanilla extract and 750g icing sugar, then thinned down with 50ml milk. I baked two colours in the same 8 inch tin separating them with a layer of parchment paper and baked at 180c for around 30 minutes. I covered the sponge batter with foil for the first 20 minutes of cooking.

Cool the sponge layers on a wire rack and remove the parchment paper. The layers do come out bumpy but if you plan it so the red and blue layers are each on the bottom, you’ll have a flat surface for top and bottom of the cake. With some generous buttercream between the wonky bits it all comes out ok.

To cover the cake took 1 layer of pre-rolled white sugar paste (it’s bumpy but it saves time and you can’t tell when applying the second layer). The top layer took 1 kilo of sugar paste. I used instant royal icing sugar by Silver Spoon and after colouring with gel food colours, used no2 piping tips to ice the letters.