Home » Pink butterfly cookies
One of my earliest blog posts where I pipe icing cookies for the first time. I’m happy to leave it up to demonstrate how I didn’t have a clue what I was doing. I’d used stiff glace icing. At the time I’d never used royal icing. Eighteen months later I was offered a book deal featuring decorated cookies. 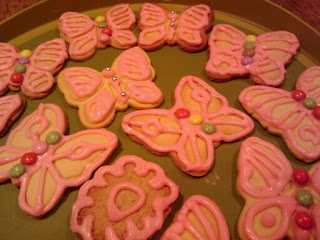 Apologies for the yellow lighting but this is the only picture I have of these.  I zapped them from my phone to my mom after I’d done them but packaged them up in a hurry next morning and forgot to re-photograph them in daylight.

These butterfly cookies were taken to a play session at my friend Sara’s house.  The pink biscuits went down very well with the little girls.

Again I struggled with icing.  I really need to nail where I’m going wrong.  A blob of the mixture was pushing through a piping nozzle with a finger very easily so I thought it was right consistency to put in the piping bag.  No it wasn’t.  Twice I removed the icing, added a spoonful of water and tried again.  On the second attempt the icing was just about coming out but refused to adhere to the biscuits.  On the third attempt it came out easily but was borderline squidgy.

All my biscuit recipes with icing just say to use icing sugar and hot water but clearly this is in adequate for anything more intricate.  What is missing?  Liquid glucose?  Glycerol?  Egg white?  All three?