Home » Pink piped buttercream cupcakes using Betty Crocker mix
One of my earliest blog posts icing buttercream on cupcakes. I leave it here to show how I taught myself from scratch. Eighteen months later I was offered a book deal. 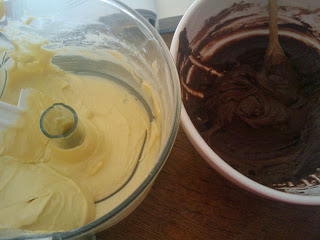 Here we have the vanilla and chocolate cake mixtures for yesterday’s Bake Five Rachel Allen recipe.  As I explained there, I had too much mixture for the tin I was using so I kept back some mixture and put it into six cupcake cases.  They would be a gift for Josie’s 2nd birthday, who we were meeting today in a local park.  I decided to take a break from trying to make letters for cakes (until I get proper cutters) and took the opportunity to practise piping buttercream instead.

It was also a chance for me to see how well ready made Betty Crocker buttercream would work for piping.  Well it was a very warm evening and the Betty Crocker was certainly at room temperature as directed.  I felt it needed more icing sugar to pipe properly – I hadn’t bargained for quite how much – I must have added at least 100g to half a jar of the buttercream before I was happy with it.  Today I also managed to get the quantity of pink food colouring right without ending up with Barbie’s revenge again. This may be to do with starting out with a product that is already coloured (pale yellow) so I seemed to be adding more food colouring than on previous occasions but the product still didn’t look pink, more an apricot puce pink.  This would be handy for creating a skin tone colour but I am unlikely to need that made from buttercream.

I piped small rosettes rather than one big swirl.  I had the problem that the cream for each rosette wouldn’t “break” so I ended up with some long peaks sticking up (fine  until they fall over).  Finally I dusted them with icing sugar before putting them in the fridge.

Today the buttercream has gone nice and firm in the fridge as I hoped and I have packed them in a plastic tub on top of mini marshmallows and then wrapped in some pretty gift film I still have left over from my wedding favours.

The pictures below show mixture in cases, cooked cakes, the buttercream piping and finally the cupcakes in their packaging. 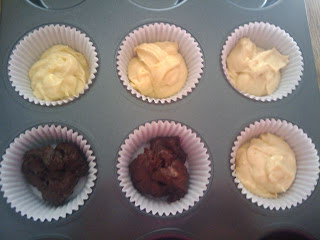 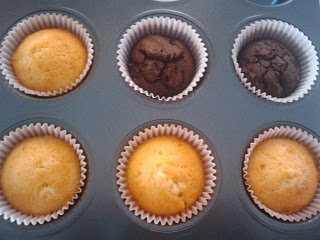 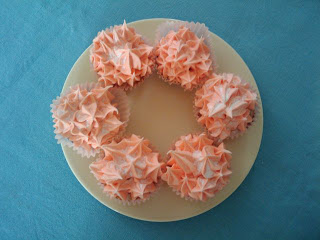 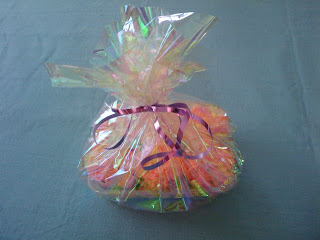 I must invest in some proper cake boxes.  My first hunt has thrown up the ingeniously named online company Little Cupcake Boxes where a box for six cupcakes with an insert to stop them rattling about costs around £1.50.  I will keep looking for more before I buy.