Home » When I wasn’t on Masterchef with Greg and John 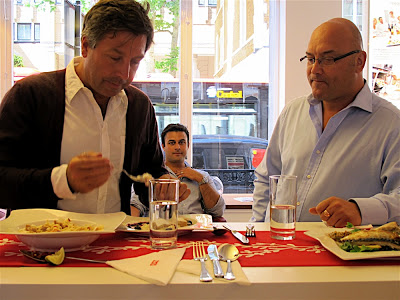 It comes with much hilarity to me that I might be perceived as any kind of baking “expert” yet in my first year of food blogging I’ve had approaches related to three television shows to “come in and cook something.”  When the team behind Miele kitchen appliances asked me to come into their London show room for a friendly cooking session with four other food bloggers in the presence of Masterchef‘s Greg Wallace and John Torode, it’s the kind of thing you say “yes” to and panic afterwards.
Given that testing out the Miele ovens had been the explanation given to me for the reason holding the event, what better recipe to try out than temperamental French macarons?  Bravery or madness? If it all went belly up I could blame an unfamiliar oven.
When I decided this, I didn’t realise the session was being run like a Masterchef show (they told us this on Friday) nor that I only had one hour, although that’s my fault because a) I don’t watch the show, you might want to keep quiet about that, and b) I was distracted by my marathon flapjack baking for Cybermummy and didn’t read the email properly.
Fortunately I have made enough French macarons in the past six months to know what I was doing… sort of. Checking the oven temperature and cooking time before leaving the house might have been a good idea too. Oops. 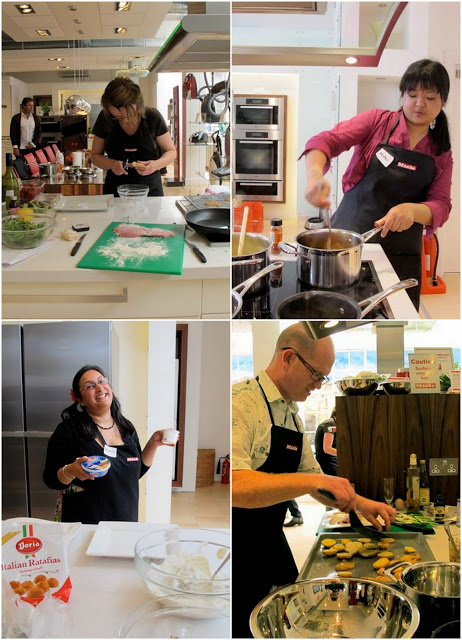 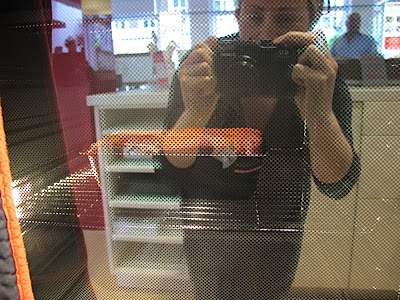 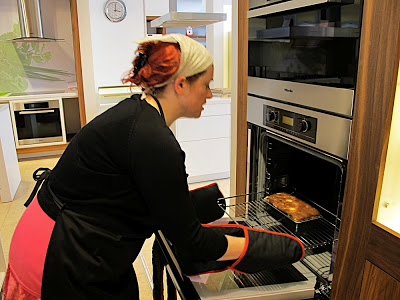 Time almost up. Cake still not cooked. But it smells good. 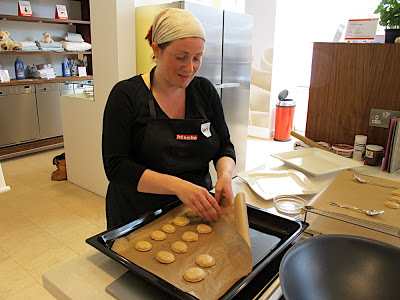 Macaron shells with feet! Yay! Now can I get them off the sheet without breaking?!
My two recipes were hazelnut French macarons with mascarpone and Nutella filling and a variation of the Hummingbird Bakery’s nutty apple loaf which I have adapted to comprise just pecans and include chocolate chips.  I have previously made and photographed the cake at home but it’s sitting in the blogging backlog from hell but it will emerge eventually (the photos are my favourites I’ve ever taken just to whet your appetite).
This macaron recipe is actually the same thing I took to my reluctant Great British Bake Off audition (something else I still haven’t blogged either. Sorry. Maybe I’ll do it when GBBO is on the telly later this year.) 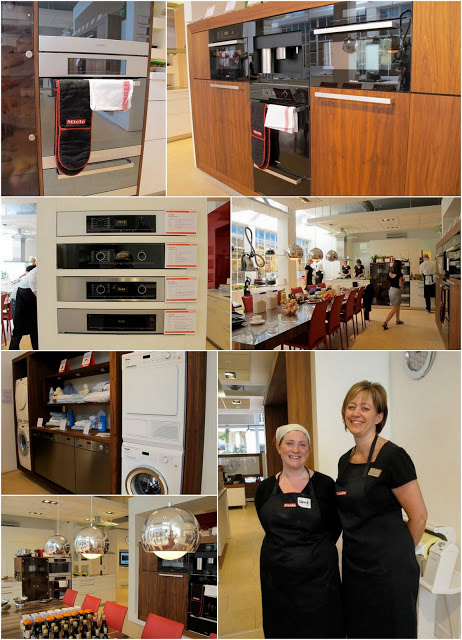 The beautifully equipped Miele showroom, including manager Alison, my
home economist for the session. Every home should have an Alison.
The beauty of baking is that once it’s all in the oven you can have a rest. I suggested a glug of gin might be in order but they gave me a glass of champagne instead whilst I tottered around for a nose whilst everything sat in the oven.
The Miele interactive showroom is like a luxurious version of your school Home Economics class. They let you go in and play with their appliances and run cooking classes for people who’ve either recently bought or are considering buying a Miele oven. You even get a home economist to help you do stuff like weigh things and advise about all the equipment. Someone takes the dirty dishes away and washes them for you – although I have trained my husband to do this at home.
The Miele ovens are distinctly high tech compared to my own. Our oven is one up from a scout’s campfire compared to these beauties with their digital displays reading out the precise temperature. The numbers go up and down as you open and close the door. There would be hours of entertainment with a feature like that in our house… 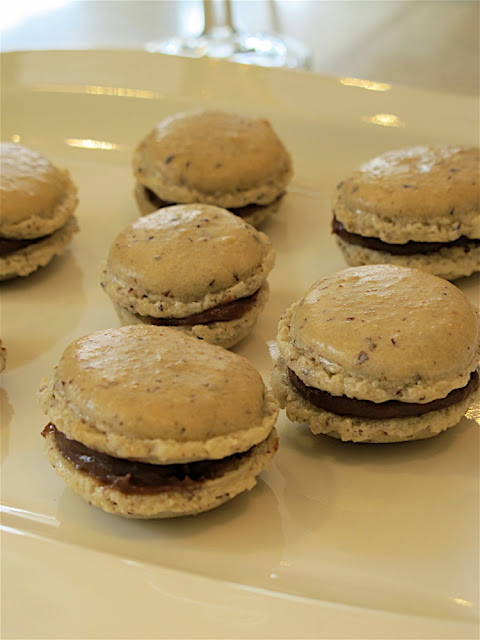 The macaron shells rose beautifully and I managed to assemble them with the mascarpone and Nutella filling without them disintegrating.  The cake still wobbled in the oven, it was meant to take 50 minutes but I told Greg and John it would be ready in 30 to keep them from going into sarcasm meltdown. At first I wasn’t going to put it on the table as I didn’t see the point of them cutting into a half cooked cake and saying it was a load of rubbish when it would be perfectly acceptable for everyone to have a slice of if we let it bake longer. I pulled it out as the last minute, it was still too moist but would pass as a pudding, and actually when it was cold it was fine. The lovely smell was the first thing everyone commented on anyway. 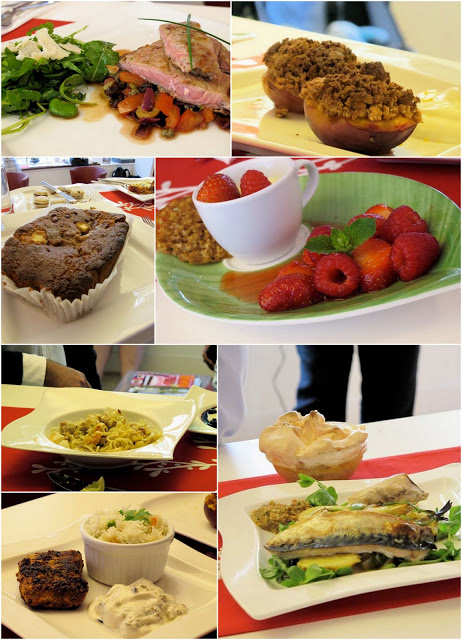 Everyone’s efforts
Top row: Helen’s veal with tomato, caper, garlic and olive sauce, Ireena’s baked nectarines with amaretti crumble topping and mascarpone orange cream;
Second row: My apple, pecan and chocolate chip cake, Helen’s elderflower and lime posset with berries and Irish lace cookies;
Third row: MiMi’s Ohn-no khao swe (Burmese coconut chicken noodles);
Bottom row: Ireena’s vegetable pilau rice, salmon spiced with cumin and coriander, aubergine raita and Danny’s grilled mackerel on a bed of spring onions, potatoes with calcot sauce and pea shoots and Danny’s pudding, gooseberry pudding with soft meringue peaks.
By the time Greg and John were ready to scrutinise my offerings, the nearly cooked cake was also on the table.  The sound isn’t great in this video due to all the background noise but they were quite kind to me and said everything tasted good but I needed to be more realistic with the time required.  Which serves me right for not reading emails properly, I thought we had two hours – you can tell I don’t watch the show.  I didn’t even realise who Dhruv was until the end (although I know who he is by name!) My radar isn’t really on grown up TV these days, had a tombliboo walked in I would have known which one it was straight away. 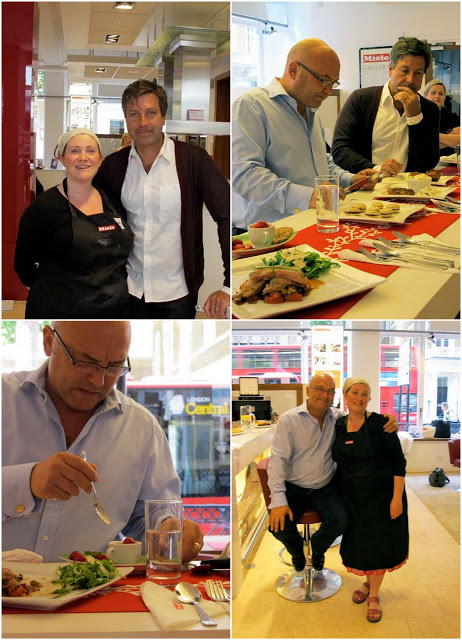 After some conferring in the corner, Ireena was declared the winner. Her prize was a cooking masterclass at the Miele showrooms and we all received signed copies of The Masterchef Cookbook. 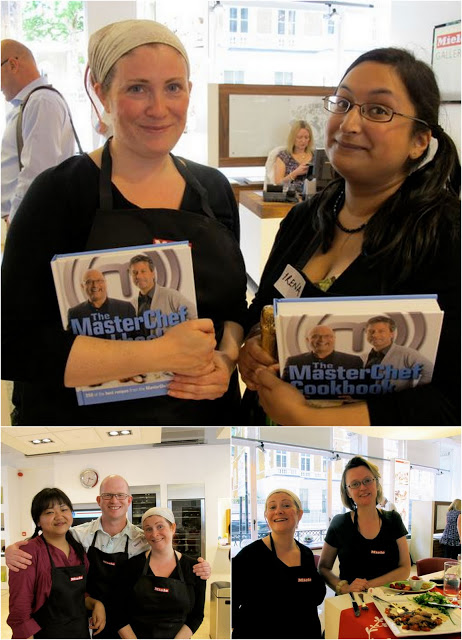 Top: Myself and winner Ireena,
Bottom from left: Myself with MiMi and Danny, myself with Helen.
Without a doubt, one of the best parts of the day was meeting MiMi, Danny, Helen and Ireena after tweeting for so long. It always amazes me how people you meet on Twitter or blogs are exactly the same in as you expect when you meet them – all lovely people.
Finally before the macaron recipe, I must say a big thank you to Nicisme at Cherrapeno who initially put the Miele team in touch with me.

This month’s Mactweets Challenge organised by Jamie at Life’s a Feast and Deeba of Passionate About Baking has called for us to make macarons inspired by song. Will Nut-Ella Fitzgerald do for you ladies?

Method:
1. Sift the icing sugar, hazelnuts and almonds into the food processor and blitz to give yourself an even finer powder.
2. In a large mixing bowl, whisk the egg whites to a foam using an electric mixer then add the caster sugar gradually and continue beating until you have a meringue that stands in stiff peaks.
3. Tip all the icing sugar and almonds on top. Using a silicon spatula, sweep around the bowl in a circle and then cut sideways strokes with the thin blade of the spatula through the centre backwards and forwards ten times. Repeat sweeping around the edge of the bowl and doing your ten strokes five times so that you’ve done fifty strokes.  Your batter should be roughly ready by this point, you are looking for a flowing lava effect. If it is too stiff continue sweeping around the edge of the bowl and doing another ten strokes until you are happy with the flow.
4. Fix parchment paper to your baking sheet with a blob of meringue batter in each corner.  Fill piping bags with the batter, I use disposable ones with around 1.5cm width snipped of the end.
5. Pipe discs in a circular movement around the size of a two pound coin. Allow a similar distance between the piped circles incase they spread. Pick the tray up with both hands and rap on the table firmly to make the circles settle.
6. Preheat the oven to 150c.  Leave the piped circles to dry out for 20-30 minutes.  The surface of the circles should dry out so that they are no longer sticky to the touch.  The feet develop as the surface has toughened before the centre has cooked, the pressure that builds up under heating forces the top of the macaron to rise, then you should get feet.
7. Bake for 12-18 minutes depending on size. The length of time really is trial and error.  I put mine on the lowest oven shelf but again you will need to experiment.
8. Hopefully, if you’ve cooked them enough but not too much, you’ll have that happy medium of a surface that peels beautifully off the baking parchment but a meringue which remains soft and gooey like a truffle inside. If you are having trouble removing them from the paper, some drops of water sprinkled under the parchment whilst still warm will help steam the macarons off. But I find that they come off best when completely cool and don’t need this. So don’t be impatient!
9. For the filling, stir the Nutella into the mascarpone until smooth. When the shells are cool, spread the filling on the flat side of a shell and sandwich with another, squeezing gently.  Allow to set for a couple of hours. I find they keep in an airtight tin for a week. If you can resist them.