Home » Passionfruit and chocolate caramel rings
Passionfruit, chocolate and cream are a heavenly trio in this cake recipe using carrots. 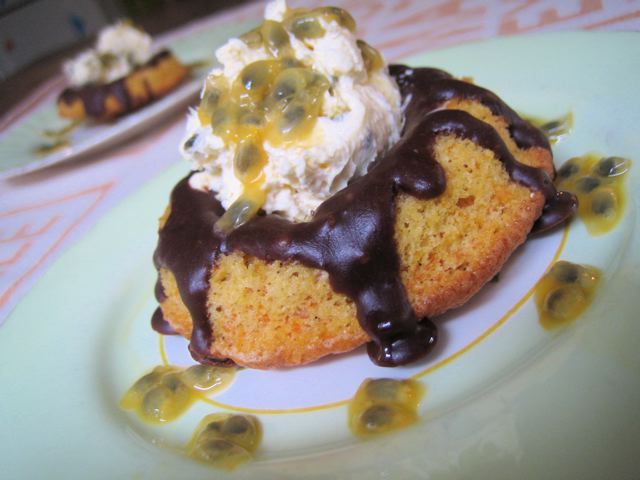 Casting directors, as my husband is fond of reminding me, have a habit of choosing Brummies for characters a bit slow on the uptake. A regular Fast Show sketch featured middle class people discussing the hoi polloi when the least brightest of their number, a Brummie, would chip in to the conversation and met with stony silence.  His catchphrase was “I’ll get me coat.”

Quite often when reading other blogs I feel like saying, “I’ll get me coat.” People out there are so darned talented and inventive yet I seem to keep ending up blogging and tweeting about the failure of elementary components of more complex dishes. The fudge that wouldn’t set, the Hummingbird cream cheese frosting that curdled, the confectioners custard that became soup: and today I present to you the Swiss roll that just sort of sat there like a whale stranded on a beach.

Having wanted to invent something myself, so that I hadn’t just copied another recipe out of Harry Eastwood’s Red Velvet Chocolate Heartache I’d attempted to remake my pumpkin buttercream previously seen topping some cupcakes.  It went the way of the Hummingbird cream cheese frosting so I frantically whipped up the cream and passionfruit filling that came with the basic recipe for Caramel and Passionfruit Swiss Roll.  Meanwhile I was trying to remake Helen Tartelette’s Salted Butter Caramel Sauce because I didn’t have the dulce de leche prescribed in Eastwood’s recipe.  It was too runny so I threw loads of icing sugar in it.  I needed it to cool down so I had a pool of it in a large flat bowl floating in a sink of icy cold water.  All this happened in the “ten minutes” (that became thirty) when my Swiss roll sponge was wrapped in baking parchment and a tea towel on the kitchen table. This is how you cook when you’ve got roughly 90 minutes with a two year old asleep upstairs in the afternoon. 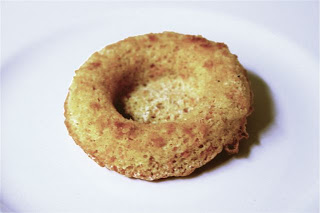 One of the mini sponge rings
The Swiss roll sponge appeared to have worked out ok.  Slightly anaemic in places where the stiff egg whites hadn’t quite meshed with the carrot and butter mix but nervous after Sunday’s footless macarons, I was worried I’d knock all the air out of it.  My tin was slightly too small so I’d held back some mixture and put this in a couple of my Grandma Kitty’s miniature ring moulds (although these looked like they might actually be for doughnuts… another disaster waiting to happen).  Eastwood’s recipe says that however the sponge goes in the tin is the way it will stay and that you have to pour it towards the corners.  Given that my tin was a little on the small side I didn’t have any trouble filling it.  I could probably have scraped some mix off and had 2 or 3 more of the miniature rings but hey, it was too late as I had to have this done and dusted by the time Charlie and Lola came on CBeebies at 4pm.

The small quantity of salted butter caramel that I’d cooled in the dish was miraculously the right consistency for spreading on the sponge without soaking straight through it.  The whipped cream, sugar and passionfruit tasted very nice.  The sponge made it out of the tin in one piece and miraculously didn’t crack when I rolled it up.  I had been concerned that my filling would not reach the edge but it oozed out in a fashion that was more messy than abundant.One thing I am quickly learning with food blogging and food photography is that a little styling goes a long way. Some fluffing with a fork made the filling look more presentable and the sheer boring baldness of the top of the cake was rectified by the addition of a few squares of dark chocolate to what was initially a pale caramel sauce before drizzling this upon the top.

I have messed up with my photos.  On day one of the Swiss roll outing, both of my digital cameras had flat batteries after 2 or 3 shots.  Next morning, even when I’d put them on charge, it turn out that the DSLR battery had fallen out of its charger and was still flat.  These pictures therefore, have mostly been taken with my digital point and shoot Canon Ixus.  Meanwhile my husband was pleading to eat it but I wouldn’t let him.  Such cruelty for the sake of art. 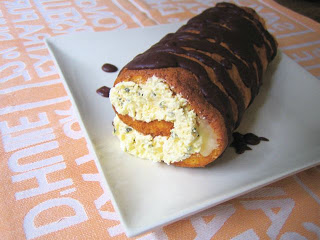 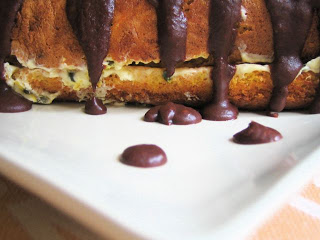 The mini sponge rings too have been drizzled with the chocolate caramel sauce and filled with the passion fruit and whipped cream.  These individual puddings are my favourites and I wish I’d kept back more mixture to fill half a dozen of these. 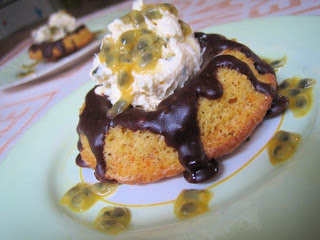 After reading some Christmas magazines, I was inspired to rename the Swiss roll a more glamorous roulade .  For what is a swiss roll if not an uptight little roulade cake? The difference appears to be in how many times the cake has been rolled.  Roulades are a looser oval shape. My cake was neither little nor uptight, it languished lazily across the plate. I couldn’t possibly associate it with those prissy jam roll things in cellophane packets.  It wouldn’t fit into one for a start.

As for Brummies being slow, I gleefully point out to my husband that two of the most credible runners up of The Apprentice, Ruth Badger and Kate Walsh, have been savvy business women from the Midlands.

By the way, did I mention that this dessert was gluten free? 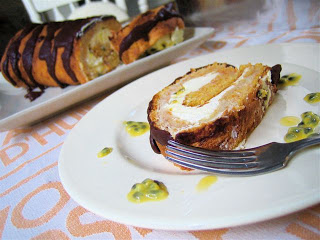 Will make approximately 18 rings or one 33 x 24 x 2cm Swiss roll.  Or live dangerously like me and use a smaller tin and make a few rings as well.

To decorate:
1 or 2 more passionfruit for squeezing

You will need a swiss roll tin or mini ring moulds. Mini Bundt tins would probably be great too.

Method
1. Preheat oven to 180c/gas mark 4.  If using a Swiss roll tin line with baking parchment.  Sieve a fine sprinkling of icing sugar the surface of the tin(s) to stop the sponge sticking.  If you are using mini ring tins, you will not need to line with paper but wipe surface with butter instead.  Then sieve icing sugar on the buttered surface.

2. Mix the grated carrot and vanilla extract in a small dish.  Place the flour and baking powder into another.

4.  Tip the egg yolks into caster sugar/salt and whisk for 3-4 minutes until pale and fluffy.  Next add in the carrot, flour and baking powder to the egg yolk sugar mixture and combine.

5.  Use a spatula to firmly beat one third of the egg whites into the egg yolk mix.

6.  Next, now being careful not to knock out air, fold in a further third of the egg whites.  Plop your egg white on the top and scoop the egg yolk mixture from underneath with the spatula making a cutting motion through the middle. Repeat until the egg white has just been incorporated.  Repeat with rest of the egg white.

7. Carefully pour into the Swiss roll tin or spoon into individual mini ring tins.  Tilt the tin to pour it to the corners rather than knocking air out of the mixture with a spatula.  Bear in mind the batter doesn’t spread much when cooking.

8. Bake a Swiss roll sponge in middle of oven for 20 minutes. Mini rings will probably only need 10 minutes.

9. For the Swiss roll sponge you need to act quickly to roll it. Initially it is rolled temporarily with the tea towel inside then you unroll to fill and re-roll: Lay a clean tea towel covered with a similar size square of baking parchment on the kitchen table. Have another rectangle of baking parchment the same size ready to put on top of your turned out sponge. Take the tin out of the oven and loosen the edges with a palette knife.  Carefully flip the tin over so that your sponge drops gently onto the baking parchment covered tea towel.  Peel off the baking parchment which is stuck to the cooked sponge.  Place a fresh piece on top.  Push the sponge, on the baking parchment up to one end of the tea towel rectangle.  Start rolling the fabric of the tea towel towards the edge of the sponge so that you already have a sizeable sausage of fabric to roll into the sponge.  As you get to the cake, continue rolling the warm sponge into a cigar shape and tuck the edges under when you finish.  Leave to stand for 10 minutes whilst you prepare the filling.

11.  If you made mini rings, use a small palette knife to loosen the edges and flip them out.  I thought mine would tear but they were quite sturdy.  Leave on a cooling rack.

12.  Unlike me, you will already have your Salted Butter Caramel Sauce and will not still be making it at this stage.  Sieve your icing sugar into the whipping cream and beat for 1 minute with a hand held mixer.  Gently fold in the scooped out fruit from your passionfruit.

13. Unroll your sponge from the tea towel and peel off the top sheet of baking parchment.  Spread a generous layer of Salted Butter Caramel Sauce all over the inside.  Spread the passionfruit cream on top of this.

14.  Roll the bulging sponge back up.  I found it was quite forgiving.  Cracks can be disguised with the sauce.

15.  Melt your chunks of chocolate in the microwave for approximately 60 seconds.  When soft, stir into the Salted Butter Caramel Sauce.  Drizzle over the top of the cake or around the sponge rings.

16. If you’ve made sponge rings, place the chocolate drizzled sponges in the fridge to set for around 30 minutes.  Spoon the passionfruit cream into the centre and squeeze more passionfruit juice and seeds on top.

So did I make the best of a bad job?  Or do you love it?  Tell me what you think below.  Don’t hold back now…