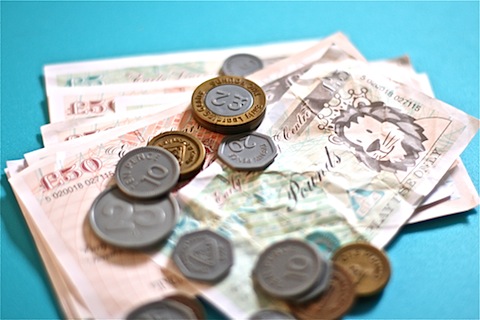 The other week we were invited to take part in a blog event geared around savings for kids and kids saving up for stuff when they get older.

It suddenly dawned on me that we don’t get Ted pocket money per se – he gets an informal iTunes Store apps allowance of roughly £2 per month but now the iPad is no longer a novelty he rarely asks for apps and doesn’t use up his full allowance.

It’s an in joke between myself and my husband that we “owe” Ted money because we borrowed his savings to pay for our car. The idea was that when we sold the Bugaboo he’d get the money back. Only we haven’t sold the Bugaboo yet and probably I won’t get as much money for it now.

Ted has two savings accounts. One is the now defunct government child trust fund which always struck me as pretty pointless. The other is a kids’ savings account set up by my father in law – only because he set it up and not me, I can’t make arrangements to pay into it online.

Which is probably a good thing. If Ted could access his savings online he’d be playing with his bank’s iPad app and all kinds. But the downside is that whilst I’m diligently putting a little aside each month for our savings, I’m missing out on an opportunity to teach Ted a valuable lesson about money i.e. savings grow if you don’t splash all your cash and it’s pretty nice watching those numbers steadily climbing the money ladder.

Ted’s a big fan of the iPad app for Game of Life and real life snakes and ladders so probably this cute infographic on savings snakes and ladders will be right up his street too. It’s full of dos and don’ts about how to manage your money at every age.

My husband and I are quite open about money in our relationship and it’s only right we educate Ted to think practically about it to. Life isn’t just one long iPad app binge, sometimes you have to save up for the kids’ christmas presents.

Do you teach your kids about savings yet?