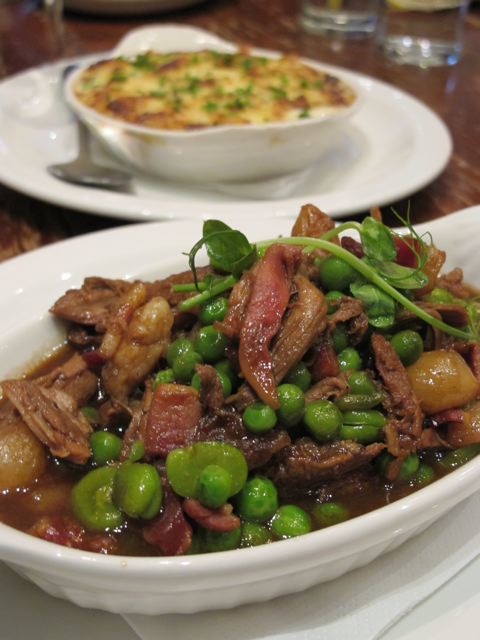 The far reaches of the Kings Road in deepest darkest Chelsea is not somewhere I’ve been many times since buying my first (and only) Vivienne Westwood t-shirt on one of my earliest trips to London.  Westwood’s shop, famous for its 70s punk pilgrimages is a stone’s throw away from The Cadogan Arms. No doubt this pub had its fair share of safety pin adorned punters back then although these days, its clientele are more likely to be well-heeled ladies looking for wallpaper at Designer’s Guild or moneyed local residents stuck in town rather than a huntin’ shootin’ fishin’ at their country piles. 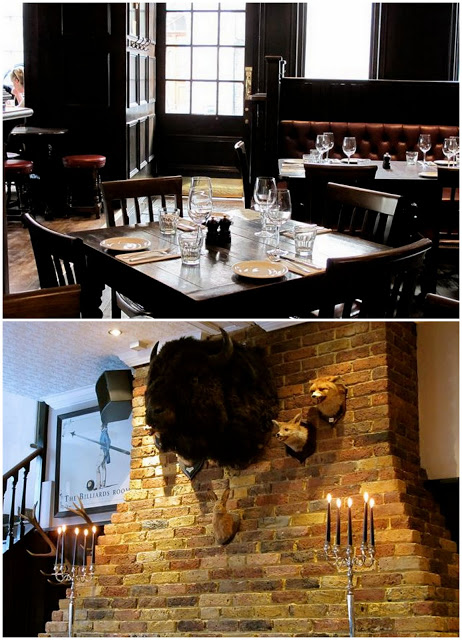 They should feel at home here. The interior of the Cadogan Arms dining room might be described as faded grandeur nouveau, stuffed animals in mothy glass cases and chipped vintage tiles sit alongside expensive leather seating and candelabras. Vegetarians be warned! 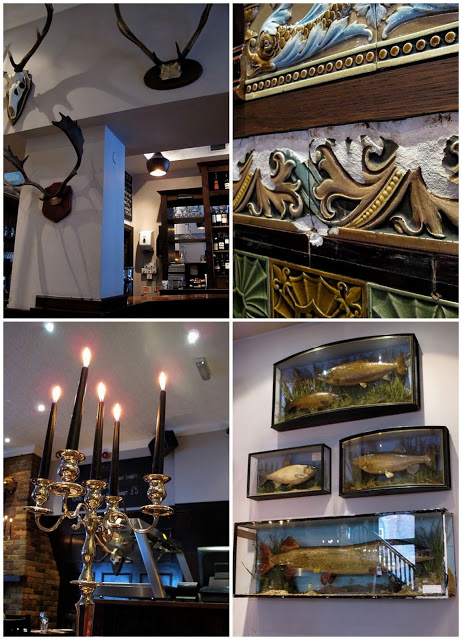 My dining companions were Michelle of Greedy Gourmet, Jeanne of Cook Sister, Johanna of The Passionate Cook and Solange of Pebble Soup.


When we sat down at 6pm, the room was understandably empty. It filled up and all tables were taken when we left at 9.30pm. Diners did look smart, you could tell this was a pub in Chelsea and not Hackney. Thankfully it was still quiet whilst we were in full food blogger paparazzi mode snapping the interior, appetisers and first course! 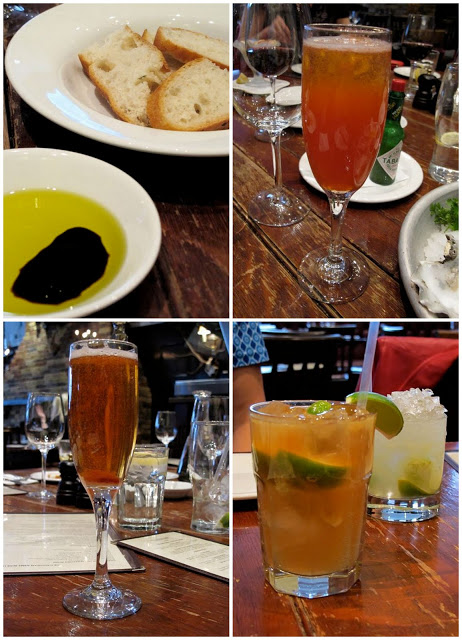 Clockwise from top left:
Foccacia, olive oil and balsamic vinegar appetiser,
Strawberry Russian Champagne Cocktail,
Classic Champagne Cocktail with Agnostura bitters,
“Dark and Stormy” (Rum, lime, ginger beer) and Caipirinha
My Classic Champagne Cocktail with Agnostura bitters was a bit of a boo-boo for me, I didn’t take enough notice of what was in it when ordering and am not a fan of bitters. Far better was the Strawberry Russian cocktail which Michelle ordered off-menu and I quickly copied desperate for some fruitiness to take away the taste of the bitters. Refreshing as the Strawberry Russian was, adorning this drink with a frozen strawberry has got to be a crime against champagne. I never got around to asking the waitress whether this was a supply problem due to volcanic ash but in any case, my companions and I agreed that we’d all managed to buy strawberries in the shops that week and that no strawberry was better than a frozen sluglike one. 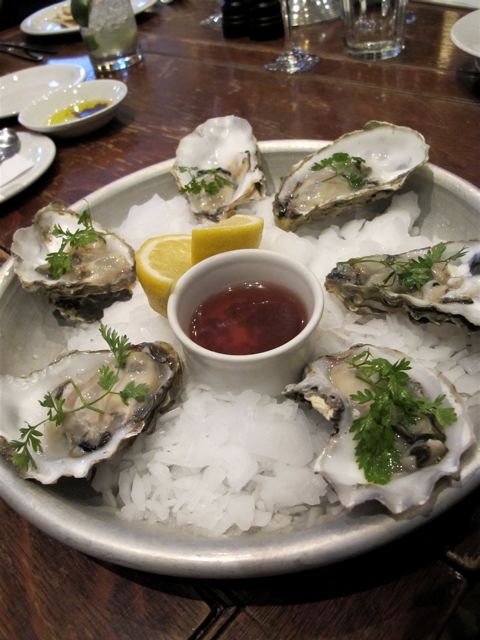 
Oysters were on my mind that day, having just booked a holiday to Ile de Ré on the west coast of France. They were impressive in both size and flavour, oysters are not something I tend to order at home in the UK but they were as good (and better even) than those I’ve enjoyed on holidays. All that was missing was a sea breeze and some thin slices of sturdy bread with ice cold butter. 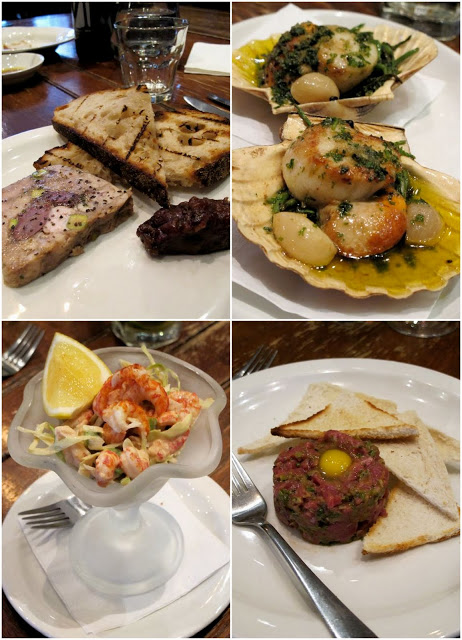 Clockwise from top left;
Wild rabbit, duck heart and pistachio terrine, home made chutney – £7
Seared whole Isle of Man scallops, samphire, confit garlic, hot butter and parsley – £9.50
Crayfish and avocado cocktail – £7.50
Steak tartare, raw quail’s egg, melba toast – £9
My companions’ starters are all shown above – everyone was happy with their choices although I think it’s fair to say the scallops were the show stopper. Personally I thought the toast looked a bit anaemic with the steak tartare and that the rabbit terrine had been clumsily presented. 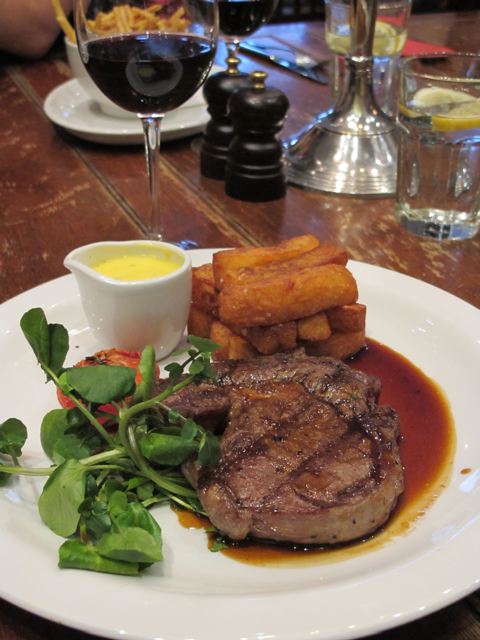 
Two of us ordered rare steaks which arrived with big fat Jenga style chips (which seems to be the standard way to serve them these days). The French diner amongst us enthused that the Bearnaise was “out of this world”.
The “done-ness” of the steaks was more a bone of contention, the non-French steak eater asked for a second “very rare” one to be done.  She was much happier with the replacement although perhaps a little too full to enjoy it by the time it finally arrived (“How can it take so long to cook a very rare steak?” we joked). 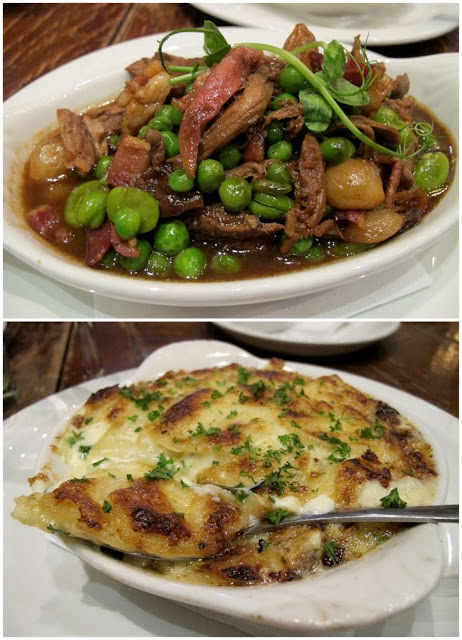 
Three of us, myself included, ordered the duck. The taste combination of beans and bacon was not unexpected but I’ve never eaten duck served as a stew before, it was flavoursome and very tender. The tiny onions gave a lovely sweetness. I’d been recommended to order some potatoes alongside the duck, the dauphoise potatoes straddled a fine line of just done enough and slightly too waxy but really I’m splitting hairs here, the two dishes together were marvellous and it was a comforting, impressive course, the highlight of my meal.
Portions were huge. I think you might get away with sharing the duck and some dauphinoise potatoes if you’d had a filling starter and intended to eat pudding. 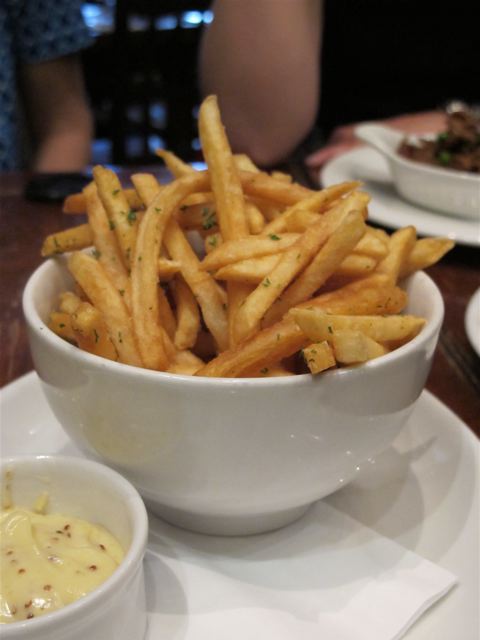 Garlic fries and whole grain mustard mayonnaise
Usually served with the mussels so no price on menu. Other sides all £3.50
Jeanne and Johanna both ordered these garlic fries to accompany their duck. The consensus around the table was that they were incredibly tasty if a little Macdonald’s-like in appearance. 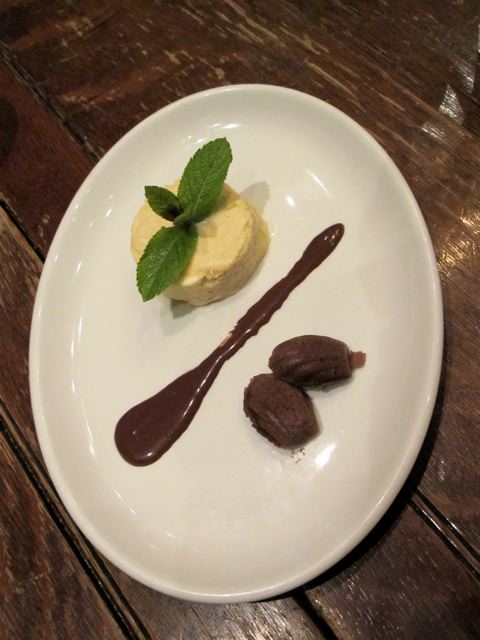 
For dessert, my honeycomb parfait was soft and cold with a smooth texture and tasted pleasingly like a grown up version of Cadbury’s Crunchie. I’m no madeleine expert by any means but the little cakes struck me as too fudgy to be madeleines. The streak of chocolate sauce down the middle of the plate could have had more finesse if it had been in a swirl rather than plonked down the middle. It looks like the cakes and the parfait are having a standoff with each other. 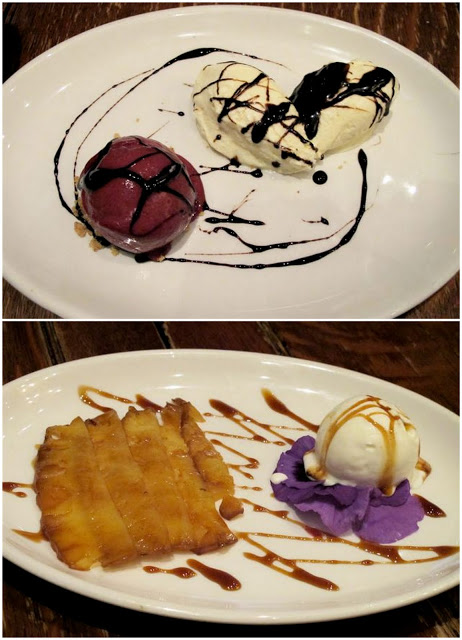 
By now we were dipping into each other’s food without hesitation so I got to taste each of the desserts. The white chocolate mousse and blackberry sorbet were so-so but the balsamic reduction sauce gave the whole thing a great kick. The presentation on both this dessert and my parfait were a little haphazard and could have been improved.
The most surprising dessert was the pineapple, not something you often see on a British dessert menu, least of all cooked. The creme fraiche ice cream was described on the menu as a sorbet although ice cream would be a more accurate description. I always love warm puddings served with cold ice cream anyway but this dessert looked elegant and even the flower was edible. I wouldn’t go out my way in future to eat nasturtiums but the combination definitely worked with the pineapple and creme fraiche. The pretty presentation of the pineapple was the best amongst the desserts. If it were a dress I’d gladly wear it. 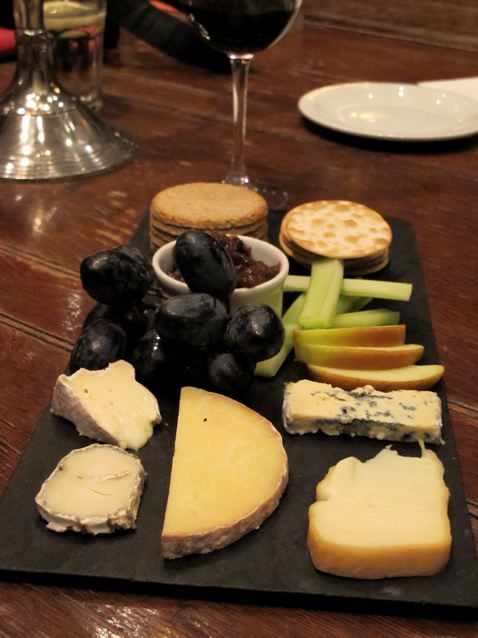 
The cheeseboard was also enormous, they do a version of it for two people but frankly you could easily share this one. There were plenty of oatcakes and water biscuits, five types of cheese, chutney and grapes and celery. A meal in itself really! 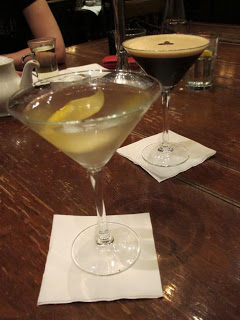 Martini with a twist, Espresso Martini
To end we were offered espresso Martinis, I’m not a coffee drinker so took mine straight. To be honest, I always think of Martini as an apperitif and wish I’d asked for a Bailey’s or a cognac instead.
The price per head for food would have been around £30-35 for three courses. With cocktails this came closer to £50. This is more than I’d usually expect to pay in a pub, albeit “gastro pub” but not ridiculously so. The duck dish was a pricey £16, even without the potatoes but then I did think it was the best part of the meal. On balance, apart from the duck there wasn’t anything that I thought was especially over priced although I do agree that the reported £3 for a lime and soda sounds crazy.
Whether this meal represents good value and whether this was somewhere I’d revisit was knocked for me by one thing in particular. The toilets. You seriously don’t want me to go into details but it was almost like walking through a space time portal into a bog (ahem!) standard pub with doors that look like they’ve been repainted five times since 1983 and plumbing from 1883. The Cadogan Arms has clearly spent money and given a lot of attention to the interior downstairs, the branding and the upstairs billiards room. The comparatively shocking state of the bathroom is a real let down. If I’m drinking a champagne cocktail downstairs, I don’t want to feel like I’ve just stepped into a student dive when I go to powder my nose.
I should conclude that I approached this meal with some apprehension having read a terrible review a few weeks earlier. My experience however was 90% positive, not perfect but somewhere I’d happily recommend to others if they were looking for somewhere in the area. My first two courses were excellent, the pudding very good/good but really only let down by presentation rather than taste. The service was professional and unobtrusive although a couple of items (my strawberry champagne cocktail and the replaced steak) could have arrived a lot quicker. The bathroom needs a refurb, desperately. The bill would be a little on the steep side but when you’ve got some of the richest people in London living on the doorstep, this isn’t surprising.
My verdict – if you live on that side of town then The Cadogan Arms would be a good choice for an informal meal in stylish surroundings. If a visit would require some travel and you’re watching your budget then you’d be better off with cheaper gastro pub food closer to home. I doubt they’d do such fabulous oysters though.
With thanks to The Cadogan Arms for the
complimentary meal on Saturday 24th April 2010.
The Cadogan Arms
298 Kings Road
Chelsea
SW3 5UG
www.thecadoganarmschelsea.com
Tel: 020 7352 6500
See also my dining companion’s reviews at:
The Passionate Cook
Pebble Soup
Greedy Gourmet
Cook Sister 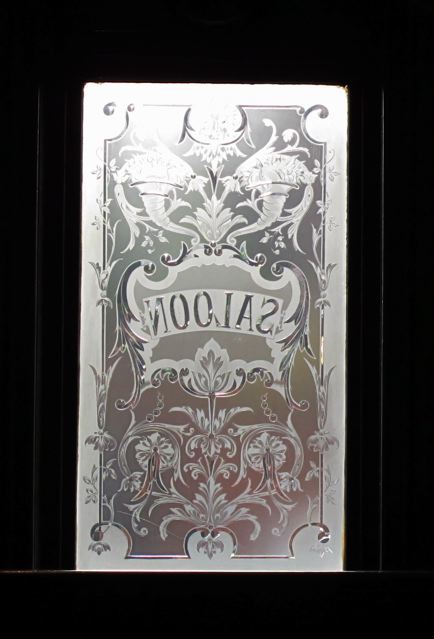