Home » The Container Café, Stratford
“Postcard from” is my occasional series of non-recipe weekend posts. Today’s postcard comes from the View Tube, a social enterprise and community project overlooking the London 2012 Olympic site. 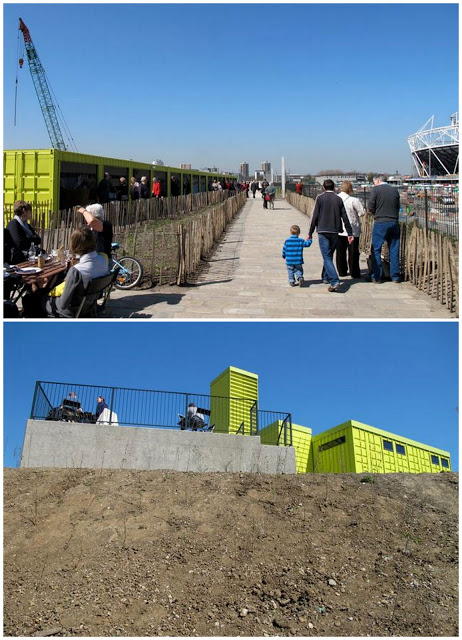 A slightly delayed weekend postcard… I am juggling making a birthday cake, redesigning this blog and building up some posts to publish during my imminent holiday.
As the crow flies, we live less than 2 miles from the London 2012 Olympic site.  Each time we drive down the A12 which curls around the boundary, I have been watching with interest as the skeletal frames of main stadium, velodrome, press centre and athletes’ village have been filled in and now resemble the artist’s impression that seemed such fantasy back in 2005.
The bid announcement, one July lunchtime, came on my last day before going on holiday. I knew we’d won before I heard it on the radio or spoke to anyone. Having stepped out of the office to buy a sandwich, the Red Arrows suddenly roared over my head. Raising my head to the sky, fat stripes red, white and blue smoke spread above.  Not an everyday sight in London! 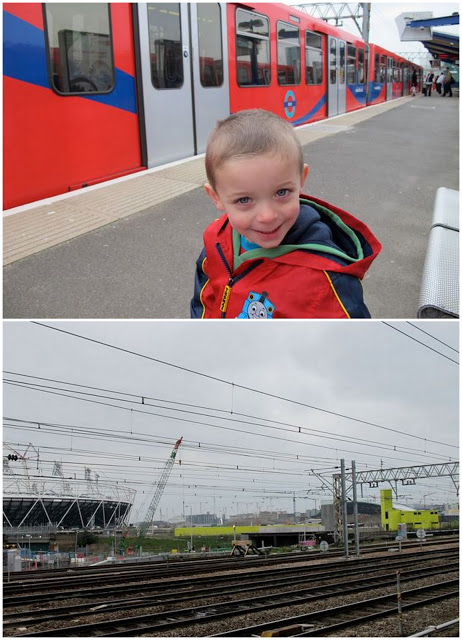 Londoners can get a bird’s eye view of the 2012 site at The Container Cafe housed in the View Tube, a structure made from lime green painted shipping containers situated on a raised bank looking over the works.
Moments from Pudding Mill Lane DLR station and just one stop from Stratford, the View Tube is much easier to reach than you’d imagine. Criss-crossed by busy railway lines and punctuated by cranes and diggers, it also makes ideal free entertainment for a small boy. 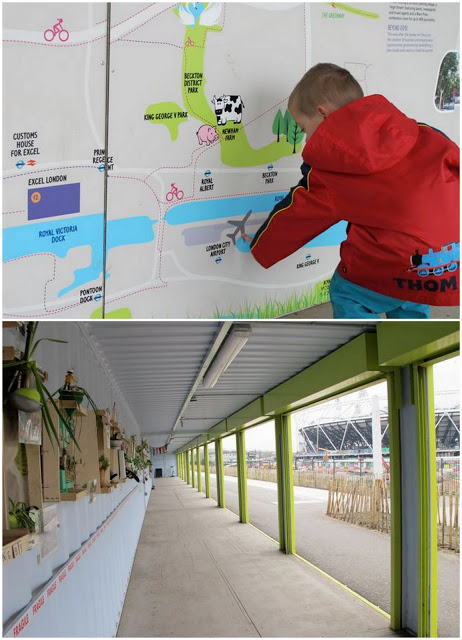 The View Tube, luridly visible from the DLR station platform features a colourful display about the work picturing uses for the various sites both during and after the games. Not being much of a sports fan, the main focus of my excitement is the new Westfield Stratford City shopping complex which will no doubt drain my pockets when it opens on the edge of the site in 2011. (I was always a bit narked that I no longer lived 2 streets away from their long awaited sister Shepherds Bush development when it finally opened in 2008 but ha! no more!) 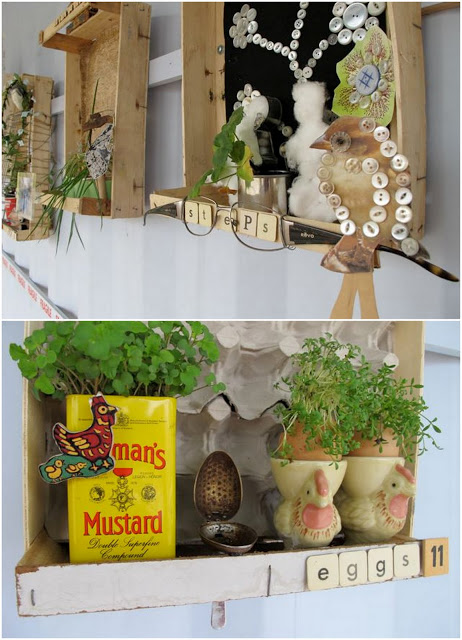 Further along the View Tube are some crafty art installations. Currently the main display is a series of around 20 wooden crates filled with whimsical tableaux featuring various ephemera and typography. They reminded me a little of Julie Arkell‘s work.
A rolling programme of artists’ residencies is planned. 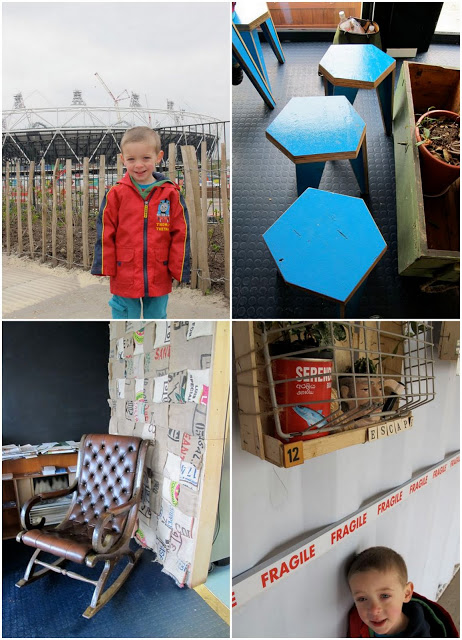 At the end of the View Tube is a two storey structure housing a classroom for school visits to the site and more crucially, a cafe.
The Container Cafe is run by the same team as Hackney Wick’s nearby Counter Cafe which also brushes against the border of the Olympic site. 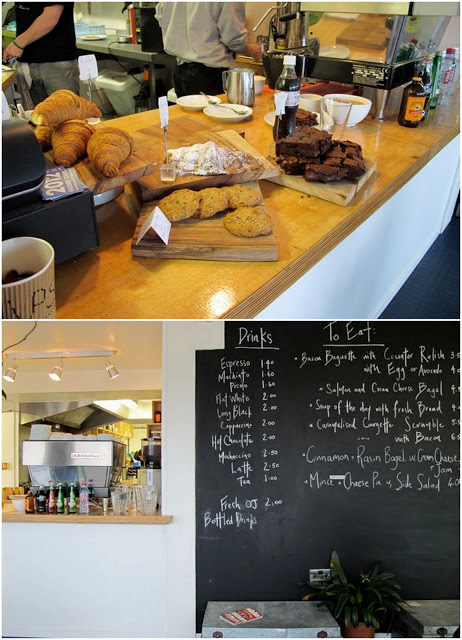 Our visit took place mid morning. Too well fed for brunch we opted for the big fat brownies, a bargain at £1 each.  To put this in context I had just bought some very disappointing brownies at Blackheath Farmers’ Market so I was delighted to discover that the Container Cafe brownies were pleasingly moist and gooey.

The cafe is quite small inside with seating for around 16 people but there is a larger decked area outside which was buzzing with people when I excitedly returned two days later on a sunny Saturday.

The interior has some quirky touches like builders’ helmets on coat hooks and little stools reminiscent of the London 2012 logo. 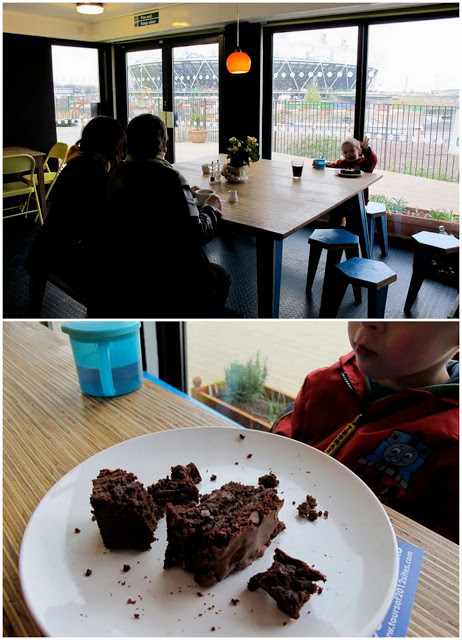 Whereas my first visit had been a lonely affair, on Saturday there were hoards of pensioners having guided tours of the site being led along the View Tube gallery.  There are bus tours available across the whole of the site run by www.toursof2012sites.com
This was originally due to be a Dinner with Crayons post but since we were not eating much it is a weekend postcard instead.  Light snacks on the menu included soup, salmon and cream cheese bagel and bacon baguettes. The flapjacks looked very tasty too but we’ll have to go back for those!
I would heartily recommend visiting the View Tube and Container Cafe as a low cost activity for those with children or anyone just curious to see the Olympic site close up.  The time required would be up to one hour to explore the displays and have a stop in the cafe but you could make it into a half or even full day if you were to follow sections of the 4.4 mile Greenway walk between the nearby River Lea and Beckton.
Go now whilst it’s still quiet!