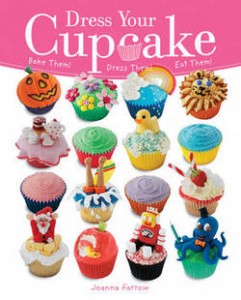 Dress Your Cupcake follows on from Dress Your Gingerbread and shows around 40 different creative cupcake projects that will greatly appear to children.

After a short but reasonably comprehensive introduction to basic techniques such as baking the cakes, making buttercream, working with chocolate and using piping bags, Dress Your Cupcake quickly moves into animal, nature, food, sporty, girly and seasonal projects.

Cartoon bright results would greatly appeal to 7-10 year old girls – I would have gazed for hours as a child.

A few ideas are clever – I liked the ground up raisins to create a “cheese burger” and softening fruit chews to turn them into pink handbags and shoes. However some results are amateurish when compared to American baking novelty books such as Angie “Bakerella” Dudley’s Cakepops or the Hello, Cupcake! series.

Some projects look untidy or unfinished – animals with blue smarties for eyes are crying out for black pupils to be drawn on with a licorice edible ink pen to make them look more alive. At best a monkey gets some clumsy chocolate icing which looks even worse. I’m certainly no expert at creating stuff like this myself but these results are more what I’d expect to see in a provincial bakery window rather than a book.

Colour schemes are hit and miss – the “burrowing mole” is digging through sugared almond-like washed out grass yet a so called “pretty parcel” has been drowned in deep blue food colouring when a delicate shade icing or wrapper might have achieved a result reminiscent of Peggy Porschen. Instead it looks tacky rather than pretty.

Strongest projects are the fruity “ice cream soda” with fondant candy stripe straws, the excellent “tea party” which features a fondant tableclothed cupcake table laid with pretend cake made from fruit chews and sprinkles alongside dinky cups and saucers and also a “sandcastle” covered in graham cracker crumbs with pale green licorice candy rolls for seaweed. However, not including graham crackers in the glossary is an omission that will confuse many UK readers.

The glossary is confusing – it’s hard to tell which is the default audience as some items are listed first with their US name and then the UK equivalent and vice versa. I am assuming the writer, who includes Ready Steady Cook for Children in her previous works, is initially writing for a UK audience even if the book is to be adapted for the States.

Verdict: The layout and standard of instructions are perfectly fine, most projects would be easy for children to follow and the results would go down a storm at kids’ parties or be highly entertaining to little girls. But if you’re a grown up with a serious interest in baking, it lacks the sophistication or polish of the more famous Hello Cupcake. Go easy on the food colouring and you’ll probably make some projects look better than they do in the book.

Dress Your Cupcake by Joanna Farrow was published by Spruce, April 2011, paperback £9.99. With thanks to Octopus Books for the review copy.

The Fairy Hobmother might still be watching who is leaving comments on yesterday’s post. Click through to tell her what you’d like in your kitchen in your wildest dreams and who knows, your wish may be granted?

« April Cupcake Crumbs: With a gift for you and me from the Fairy Hobmother
Baked and Delicious? I don’t think so… »