Home » The France Show at Earls Court
Before you read this post, be warned that Blogger is double spacing my paragraphs and it’s driving me nuts. 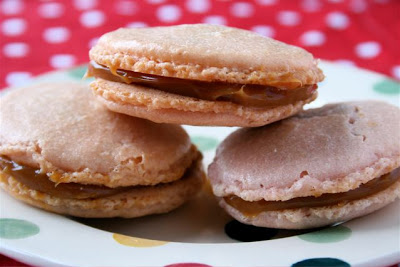 Something about this month’s Mactweets macarons was to be new. “Maybe drying out fruit to create a new flavour/colour powder, try Italian meringue, try new flavour combos, try getting feet if you’ve never done that before… or use your macs to create a new dessert. Out with the old, in with the new!”

Feet would be new for me.  Six attempts at macarons last month resulted in nearly 200 shells out of which a mere TWO had feet. Feet, if you are new to macarons or else have been living under a rock, are the frilly crinkly bits around the edge of the mac.
I had also been hoarding the dried raspberries and strawberries out of a box of Special K Red Berries especially to grind up for macarons.  Given that it was my final batch which had the two feet last month I started this month’s Mactweets with heady optimism.  My first batch featured said ground up strawberries.  Fail. No feet. 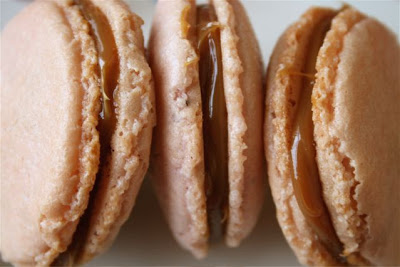 I have been tweeting like mad with Pam The Cooking Ninja, Jamie at Life’s a Feast and Deeba from Passionate About Baking all about macarons.  I exchanged direct messages with Mowie from Mowielicious.  My next batches were coloured pink (for Mowie) and then orange.  I did a batch with 50/50 split almonds and pecans.  Anything to recreate that first batch back in September that actually had feet.  See here, I can prove it. 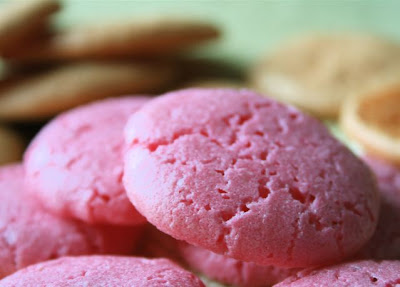 Out of six further batches this month, the first two looked as if they were creeping towards having feet.  I even got half a dozen shells with feet on the third batch but the domes were flat and cracked.
I have experimented with different oven shelves, different temperatures, different lengths of time for ageing my whites, different lengths of time for drying out the piped shells.  But why why why, when I got feet on my first ever attempt, do I not get feet ever since? Apart from a few paltry toes peeping out.
In the midst of this I even seem to have acquired a reputation as someone to consult about macarons!  Which is quite ridiculous when you read what I’m about to say next.
It dawned on me. I had been following American recipes that called for “powdered sugar”. Now I know that “confectioner’s sugar” is icing sugar and that “superfine sugar” is caster sugar.  I thought powdered sugar was another name for caster sugar.  Oh dear. Seems I got it the wrong way round.
Uh-ah. As the scoreboard on Family Fortunes says.  I have run out of days to age my egg whites and bake and photograph my hopefully foot-filled macs using icing sugar.  With a heavy heart starting each Mac baking session I certainly need a break. I’ve decided I don’t even like them that much but feel sure this will be reversed if I achieve that Holy Grail, the macaron with feet. Fingers crossed for success next month. 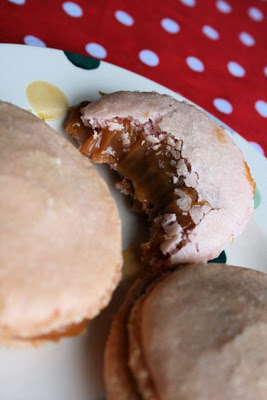 Now for my second “disaster” of the week.  The France Show… 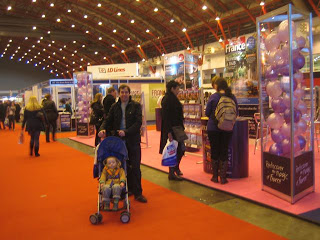 Yesterday we braved the bad weather to travel across London to The France Show at Earl’s Court.  We had previously enjoyed a long running show called Vive La France which ran every January at a larger exhibition hall, Olympia, just down the road. Here are my husband and Ted posing near the entrance before we knew what a lead balloon the show was. 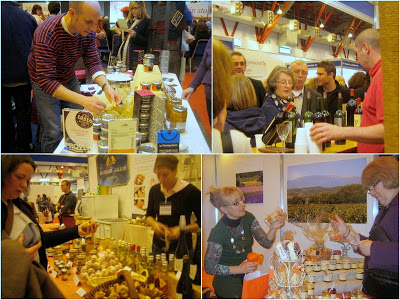 We had come expecting an experience that felt like a little trip to France. There would be shopping, French food to try, wine tasting, exclusive offers, seminars and a property fair. 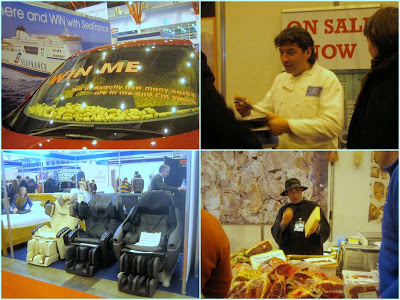 We also knew to expect fun competitions such as “guess the number of corks in the Renault Megane”, autograph signings by Jean Christophe Novelli (who appears to be a permanent fixture at these events), some whacky stalls selling stuff that has nothing to do with the subject of the show i.e. massaging chairs and French stall holders who look like they’ve stepped out of a Marcel Pagnol novel. 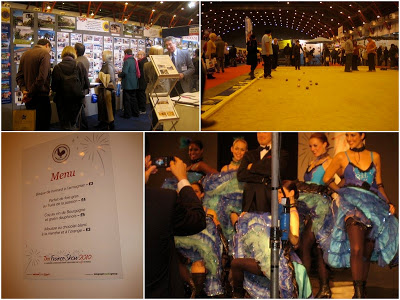 People had come to find their dream holiday home, play petanque, eat some good food from Mon Plaisir Restaurant and watch entertainment such as the Can Can girls. 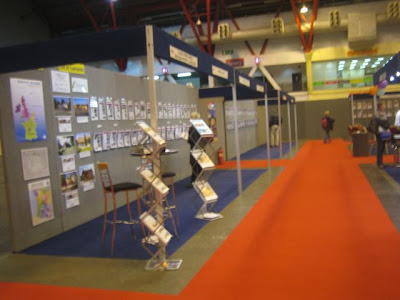 The reality sadly… was that the place was empty.  Fair enough this picture was taken at 3pm but some of the stall holders had not made it from France and many people had not visited due to the bad weather. It really showed. 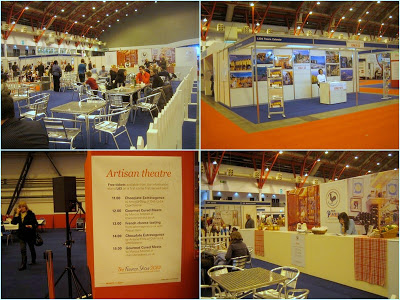 Restaurants and eating areas which would normally be mobbed were empty.  Stall holders sat twiddling their thumbs looking bored. The “Chocolate Extravanganza” which was to have taken place twice on Saturday was cancelled. 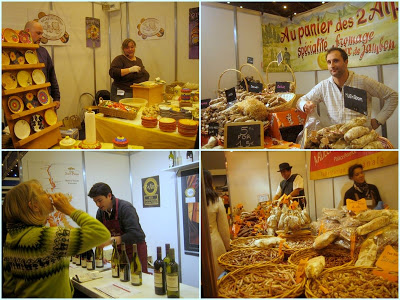 In some ways it was quite nice to wander around without the pressure of crowds but there was seriously no atmosphere. There were hardly any food stalls and big companies such as Ryanair and Eurotunnel who would normally have great offers on were simply not there.  Earls Court 2 is a much smaller venue than the previous show would have occupied at Olympia.  Furthermore, the property show would previously have been on it’s own floor. I would estimate that this show was at least one third of the size of Vive La France. 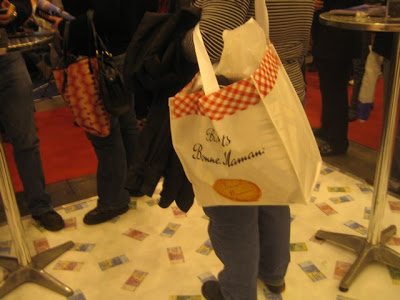 I hunted high and low for one of these promotional Bonne Maman bags but they seemed to have all gone. Quite how I’m not sure as there certainly were not many people there to have claimed them. I had hoped there was a Bonne Maman stall somewhere selling biscuits and jam but could not find one. 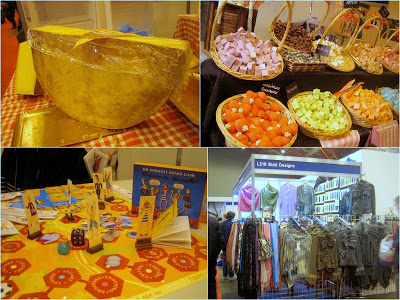 What did see was a huge piece of cheese, lots of nougat, a weird board game apparently to encourage people to visit Marseilles and some hideous clothes.

I tweeted @thefranceshow on Twitter to say how disappointed I was.  They said my comments were noted and apologised that some stall holders had not been able to come due to bad weather. Despite this, I think that the main problem is that the show has been a victim of the financial climate, massively scaled down and evidently unable to attract big exhibitors who previously would have been there. And the situation with the weather made what was already a weaker show much worse.  The ten pound admission charge was nothing short of criminal in the circumstances and it will put me off shows held in smaller venues in future. 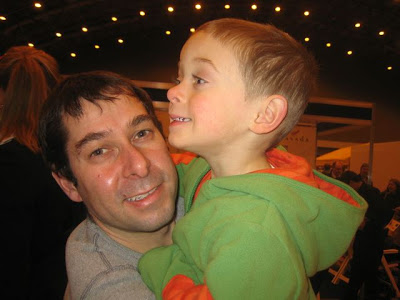 Nevermind.  Teddy enjoyed it and we got out of the house instead of having cabin fever in the bad weather. Oh and we ate a really good curry at Masala Zone too.
Next time I have cheerier news with two successes to tell you about.  Watch this space.