Home » Postcard from… Lyon: galette des rois
This blog post marks the first in my new series of Saturday mini-posts which will be called “Postcards from…” I will use it to share anecdotes and pictures coming from holidays, friends and family around and about.   Today’s postcard is from my uncle in France. 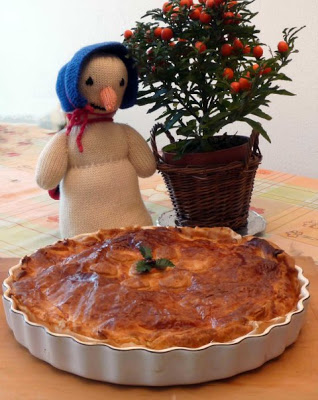 We have just made this morning a traditional galette for tonight at Simone’s. She is inviting cousins and cousines to mange. The cake of the kings. Galette des Rois, the traditional gateau served in France to celebrate the feast of the Epiphany. The French will usually buy them, complete with the crown and the feve, the charm which is usually manipulated into the piece served to the youngest child.  But to make one is relatively easy, more fun and straight out of the oven as in the picture they do look really good.


Setting aside these French pastries, we were challenged recently to make some traditional fayre for an international meal. We decided that tea time was to be our theme. Surprisingly, there is a magic about ‘tea-time’ and the French still have the idea that everything in England still stops for 4 o’clock tea! We set about making some petite salmon and cucumber sandwiches, a light fruit cake, apple pie and bread and butter pudding. The thought went through my mind, that with all the delicacies of this gastronomic centre of France what chance would a simple pudding pain et beurre stand in tempting the more seasoned palate?


The last time we saw the fruits of our labour, was when it was placed on the table. If we had not hidden a morsel of bread and butter pud for ourselves, we would have missed out. They ‘adored’ it, it was delicieux. Our  understatement of it being pas mal simply left them bemused. Unfortunately the ‘tea making’ was not under our control. Here the French really need some lessons.


Not being a tea drinker myself, I wouldn’t be in a position to give anyone French or otherwise lessons. I do recall though, that the storyline of “A Year in the Merde” by Stephen Clarke, a weak but successful novel based on his experiences living in Paris, revolves around setting up a chain of English themed tea shops in France. So far as I’m aware this has never happened in real life but it sounds like there’s a market for it in Lyon at least.