Mich Turner is presenting new baking TV show Britain’s Best Bakery which started on ITV this week. Here’s a peep behind the scenes with Mich Turner at Little Venice Cake Company at one of her ‘intimate’ piping classes. 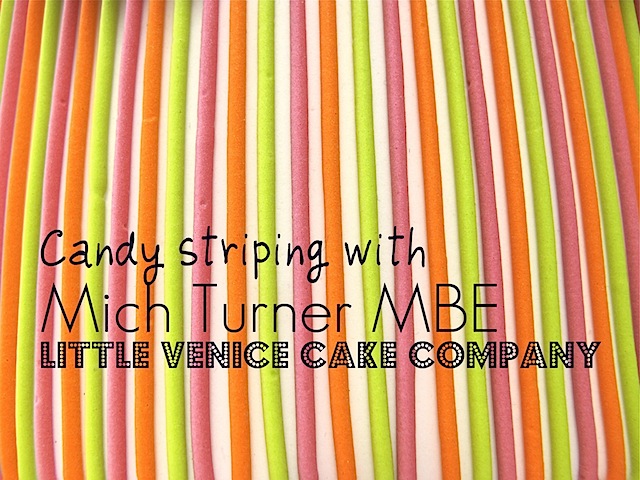 I’m going to embarrass myself here. I feel like Bella Emberg next to Darcey Bussell.

Last year before I knew I was doing the book I did a piping class with Mich Turner at the Little Venice Cake Company. 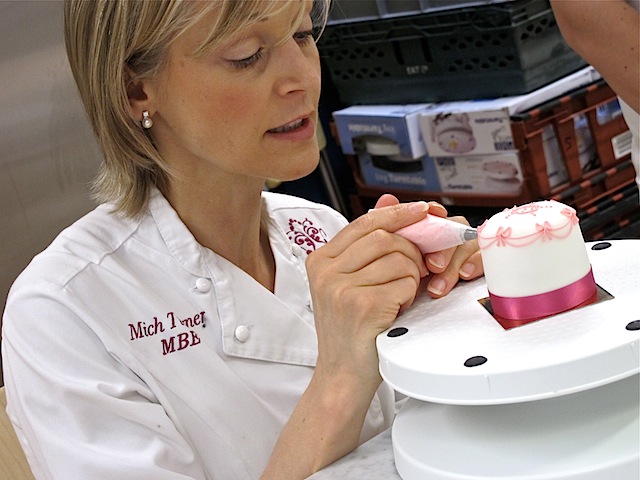 In just a couple of hours I picked up wonderful tips that increased my confidence with piping ten fold. 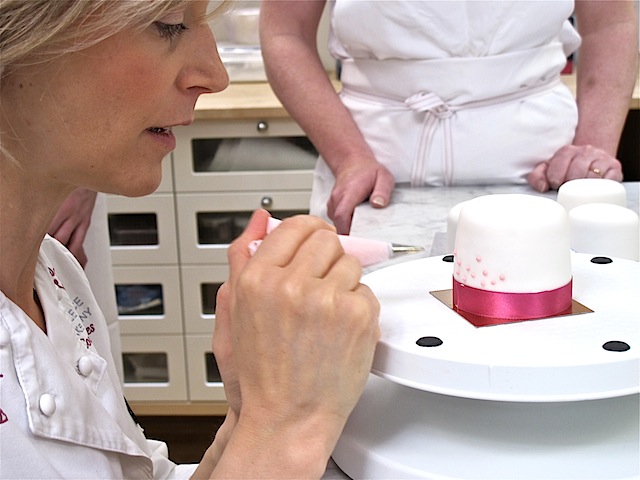 During the class we decorated four individual cakes in four different ways, each one becoming progressively more difficult.

What became apparent was that piping, like handwriting is largely a matter of practice. Whilst not everyone is going to achieve Mich Turner style copper brass plate magnificence immediately, it is satisfying to see yourself noticeably improve quickly. 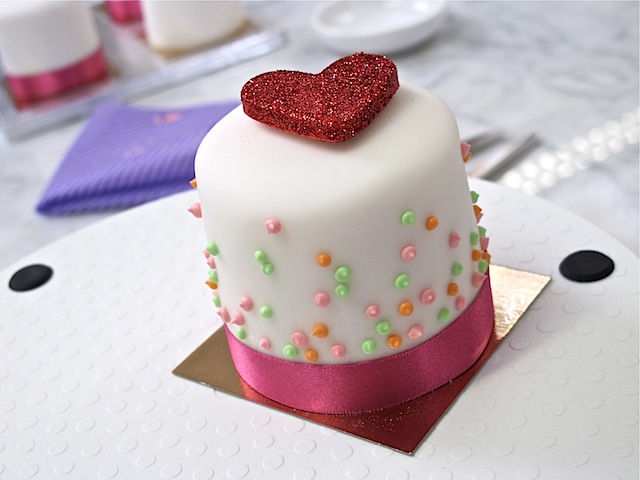 First we practised doing little dots – the idea was to avoid getting the pointy bits but they look pretty good anyway just with a selection of colours.

Actually making the dots look randomly placed is the hardest part – your brain keeps wanting to organise them in equal spaces! 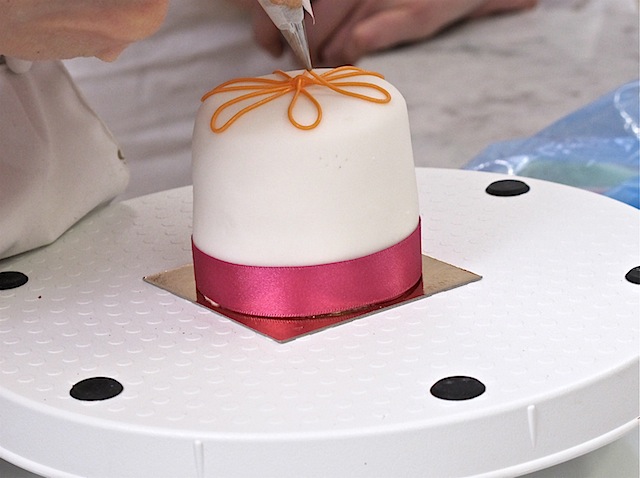 Next Mich demonstrated some free flowing loops on top of another little cake. 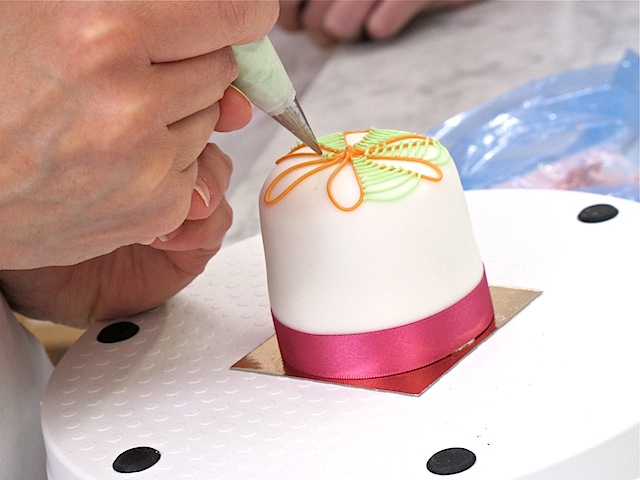 Which get joined up with contrasting icing. 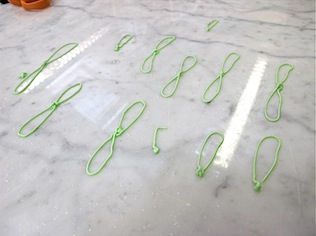 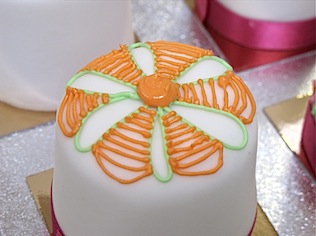 Deep breath and it’s time to practise on the marble worktop before doing it for real.

Testing… testing…whoops. Oh well let’s go for it and here we are; flower design on top of miniature cake 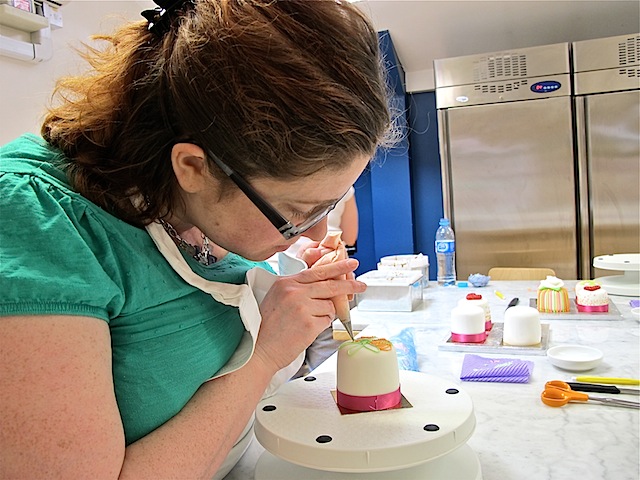 Me in action in the surprisingly compact nerve centre that is Little Venice Cake Company. 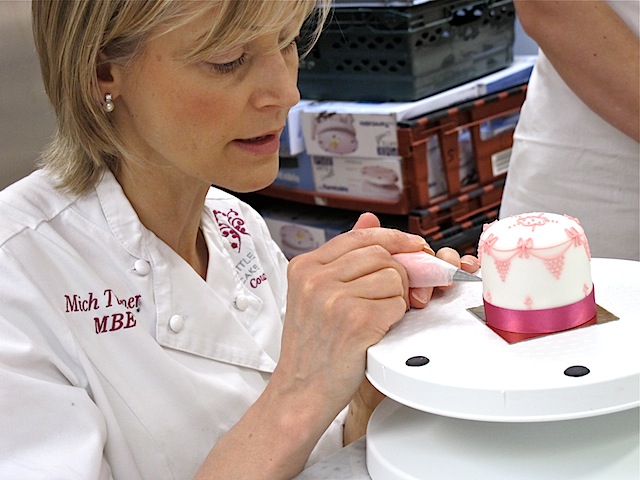 The designs are getting more complicated now and Mich demonstrates this bows and swags design combining techniques we’ve used so far.

Actually, although mine was less fabulous than hers it was a lot easier than it looked. You take it in stages, get the swags evenly spaced and then add the bows and dots around everything step by step. I’m sure you’ll agree the end result is highly effective. 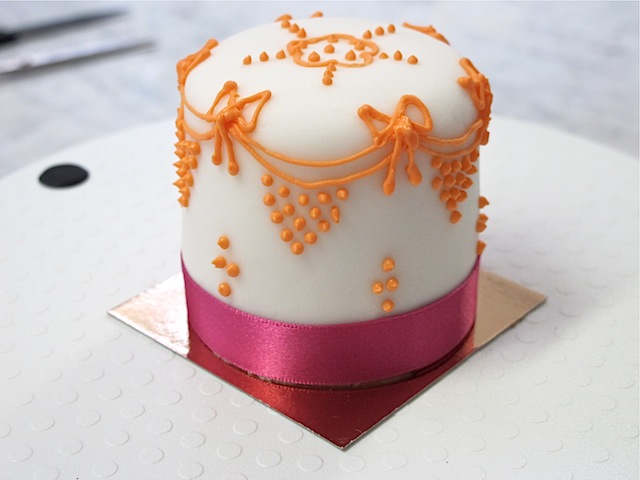 Not bad for a first attempt at swags although I won’t be so bold to swagger about them! 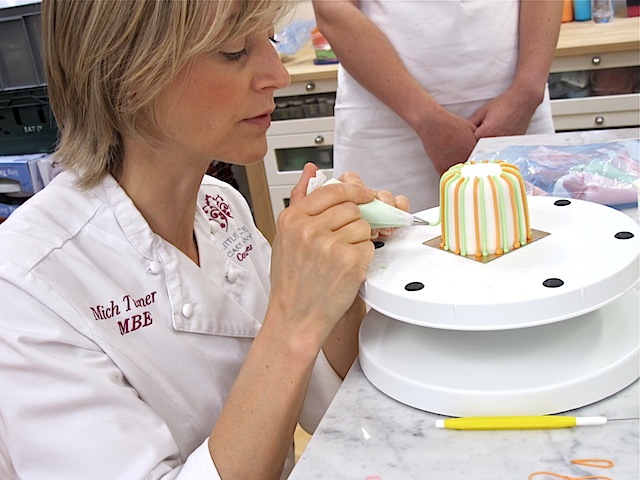 Finally it was time for my nemisis. The candy stripe. Memorably Mich had told me at a previous cupcake decorating class how she’d picked up a piping bag and done perfectly straight lines the first time. 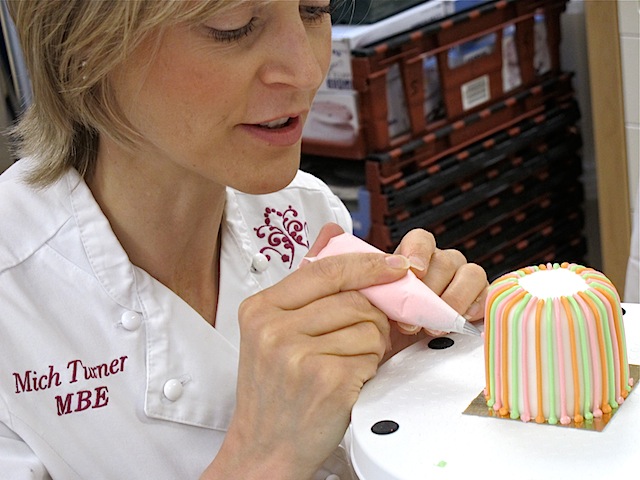 She’s not lost her touch as you can see here. 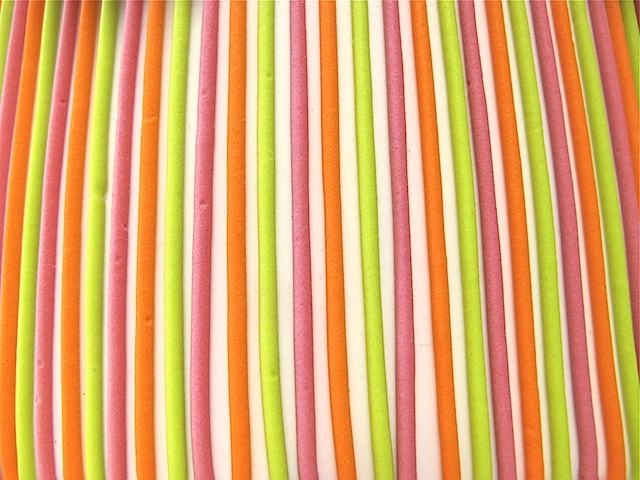 Mich Turner candy stripes. Dead straight. (These were on a bigger cake outside) 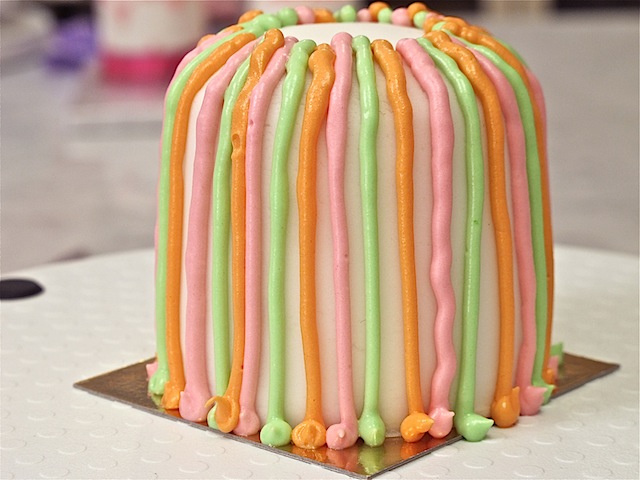 Maison Cupcake candy stripes. Dead wonky. Although you need to take into account that pink was the first colour (the wobbliest). And I had never done this before at the time. (Well not much). 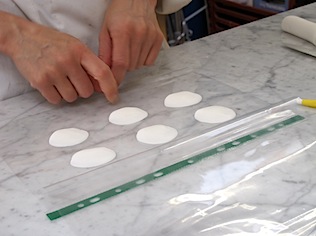 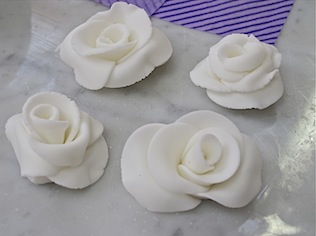 To top the candy striped cakes we made sugarpaste flowers as previously shown in my Mich Turner cupcakes masterclass post. 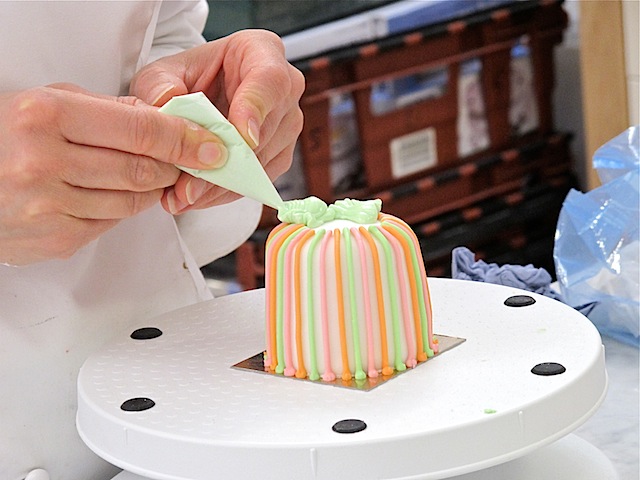 It was definitely after classes with Mich that I saw the point in making my own paper piping bags. Depending on the job, they’re much comfortable to hold than plastic ones. With the added advantage of no washing up. 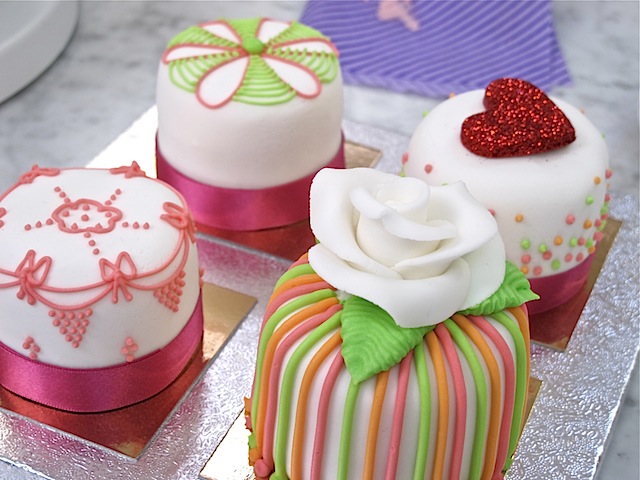 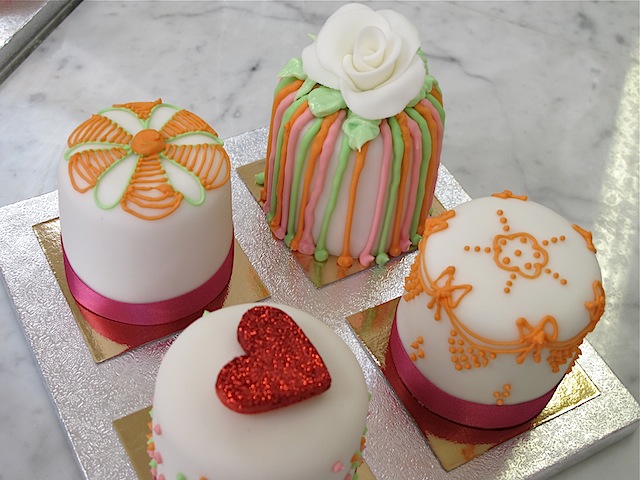 Ok well let’s not compare too closely… I have *cough* managed to put in a LOT more practice since. Let’s just say freehand is more my style than neatness and perfection. Although the orange one on the far right looks pretty good I reckon.

Self deprecation aside, what I will say to encourage newbies to sugarcraft is that it’s definitely like handwriting. Noone ever picked up a Berol fibretip and produced a page of beautiful calligraphy first time. Most of us take years to develop our handwriting style and yet this is something we (used to – before computers) practice every day. 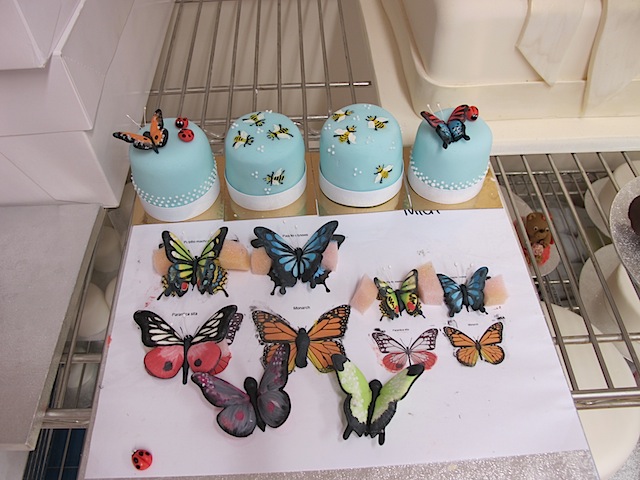 Nevertheless, I do still feel like Primark next to Chanel! I hope Mich can forgive me for taking so long for publishing this post… I was truly in awe of her work and feeling very unworthy to be even attempt writing a sugarcraft book that might sit on shelves next to hers. 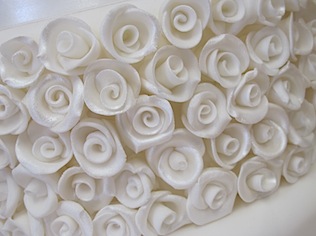 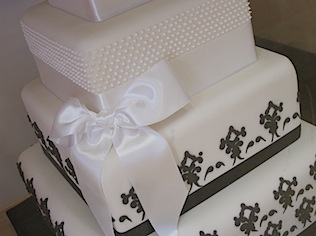 Mich is now appearing on ITV’s new show ‘Britains Best Bakery’ at 4pm weekdays on ITV1. Alongside Peter Sidwell she will visit 33 of the Britain’s best bakeries to taste the produce and understand the passion behind British baking at its best. The show will also explore the bakeries’ role in the community and sample the finest bakes in Britain.
I caught the first episode on Monday 26th November and the show is on daily. It’s kind of a Great British Bake Off for professionals with several bakeries per episode demonstrating their signature bake and a challenge set by Mich Turner and Peter. There are interesting documentary bits about the bakeries and background to their signature bakes. It’s intelligent daytime TV and I hope it gets the viewing figures it deserves. If it’s on when you’re at work go set your V+ boxes now!
With thanks to Mich Turner and Little Venice Cake Company.
To find out more about classes with Mich Turner visit Little Venice Cake Company.