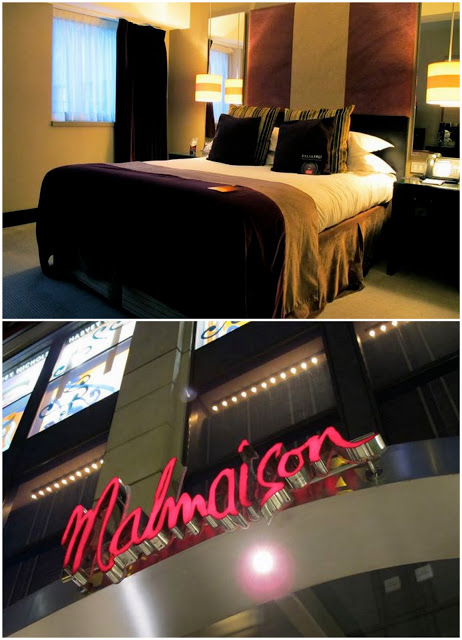 Long before Guggenheim-wannabe Selfridges upstaged The Rotunda on the Brum skyline, the Mailbox restaurant and shopping complex had pushed the second city more upmarket.
For many years, knocking down the Bull Ring was little more than urban myth.  As an adopted Londoner, Birmingham city centre was not on the itinerary for quick visits to relatives around the Midlands and I assumed it was still the same. 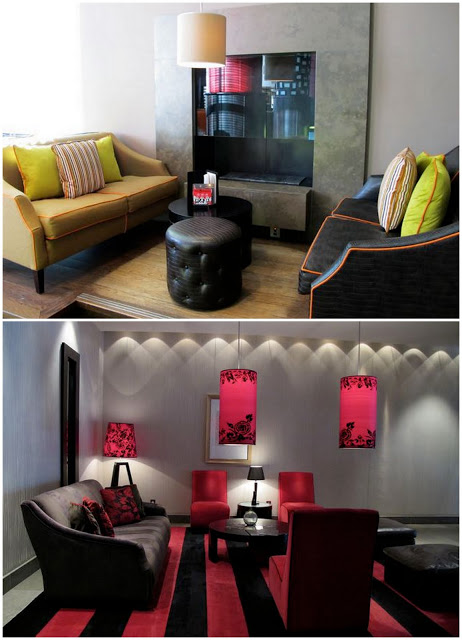 Then a few years ago, various colleagues started whispering about how they quite liked having to attend meetings in Birmingham.
My boss, ever happy to engineer meetings in nice restaurants, would explicitly request that I book him into Malmaison in Birmingham’s Mailbox, a hotel, shopping and restaurant complex built in the shell of a Royal Mail sorting office.

The Mailbox site, with its flagship brands Malmaison and Harvey Nichols, led the rejuvenation of Birmingham city centre and the bulldozing of the dilapidated Bull Ring soon followed. 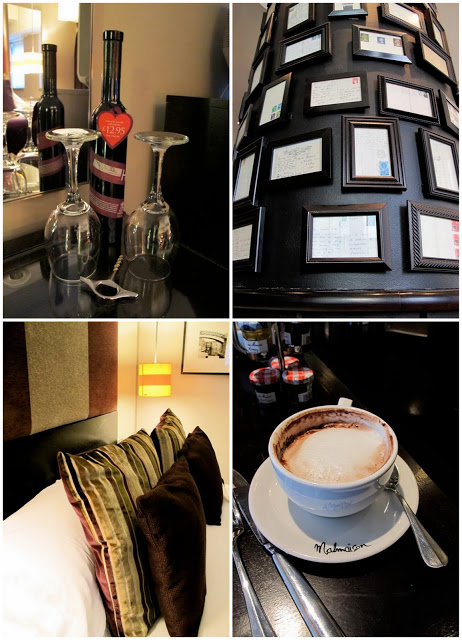 Previously content with no-star rated hotels and a back pack, my first introduction to “boutique hotels” was after my sister-in-law organised a family party at the original Hotel du Vin in Winchester.
Stays in groovy or better still, HIP Hotels have been a passion of mine ever since. 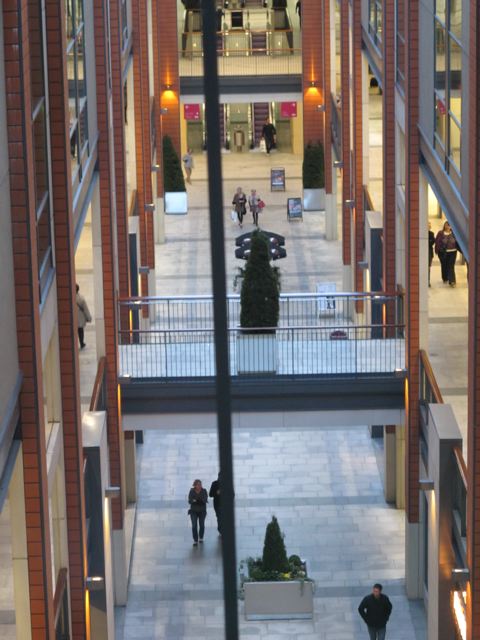 View from our window.
Thus I had been concocting an excuse to stay here for around eight years!  Recently my 3 year old was packed off to Grandma’s narrowboat whilst we spent the night in Malmaison.
The Mailbox car park under the hotel costs £12 per night. Compared to rates in tourist towns such as Bath and Cambridge, this is reasonable for a central location. 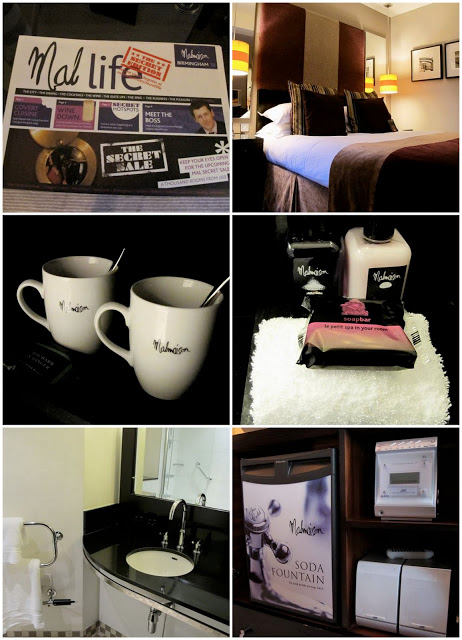 The layout of the room was typical of modern hotels such as Crowne Plaza and other 4 star chains. For greater individuality you’ll need to book a suite but it does make a change from pale walls, beech furnishings and beige carpets.
The furniture is good quality but there are signs of wear on edges of some dark woodwork (you can notice this on the brasserie table in the photo below).
The bed was high and comfortable, I loved the velvet striped cushions infront of the pillows. The artwork was black and white photos of buildings around the city.  The bathroom was not very exciting, there were no bathrobes on the back of the door and there could have been more toiletries.  Those that there were were in generous sizes and although I normally frown on my husband’s habit of hoarding the freebie miniature shower gels (his idea of a joke, he knows it bugs me), they were nice enough and after a one night stay, there was plenty left to justify taking it away.
There was only one bath towel which always annoys me when two of you are booked in. I suspect hotels do this to save on laundry, banking on most people staying one night not bothering to ask for more, I am sure more would have been provided if we’d asked.
There was a minibar. I never use minibars other than the mineral water but I always get excited opening them and seeing what was inside. Some chains give complimentary bottles of mineral water but that was not the case here. Next to the minibar there was a CD player but we didn’t have any CDs with us to play.  I imagine the volume is capped as you would not want your neighbours playing loud music.
Downstairs there were also in house spa facilities although I didn’t have the time (or the money) to enjoy these. 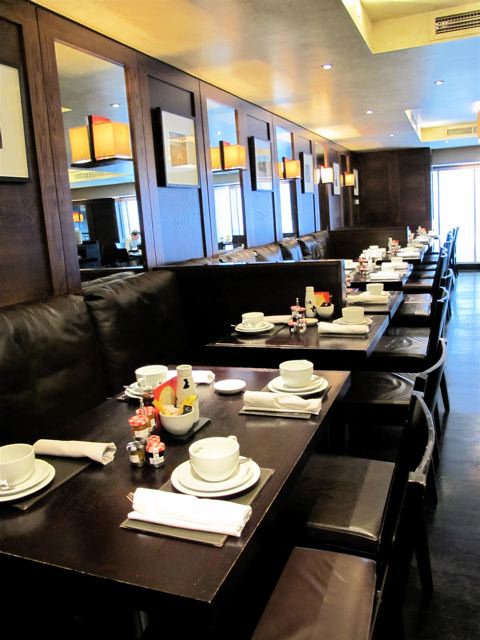 I will do a separate post about our trip out to a local restaurant/bar that night.
We had intended to have another drink in the hotel bar before going to bed but after the stylish laid back surroundings in which we’d spent our evening, the dark noisy Malmaison bar was packed with women too far the wrong side of 25 to get away with their skimpy dresses clinging to sweaty men in suits.  It might as well have been The Dome in 1991.
Fortunately the soundproofing (or was it because we were at the back on the fourth floor?) was excellent and after a quiet, comfortable night’s sleep, we strolled back to the same room for breakfast eight hours later where apart from an abandoned glass of white wine in the lift, there was no sign of the drinking and dancing frenzy we’d seen the night before. 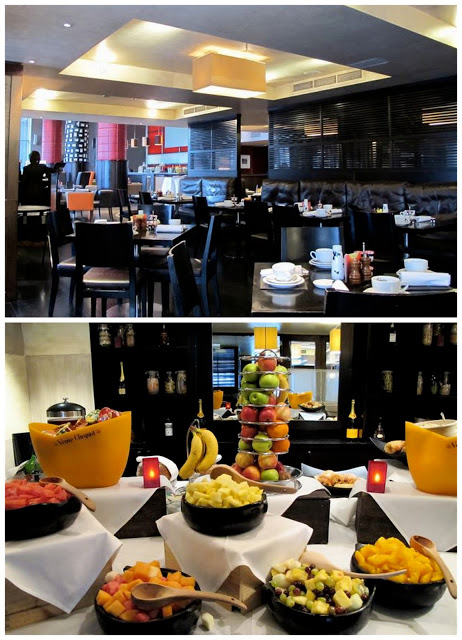 Malmaison offers several versions of breakfast. For those in a hurry, £5.95 gets you a simple continental breakfast of croissant and hot drink brought to your room, in the breakfast area £11.95 grants you access to the heaving buffet which I will describe further below and for £13.95 you can order additional hot breakfast dish such as The Full English, kippers etc. 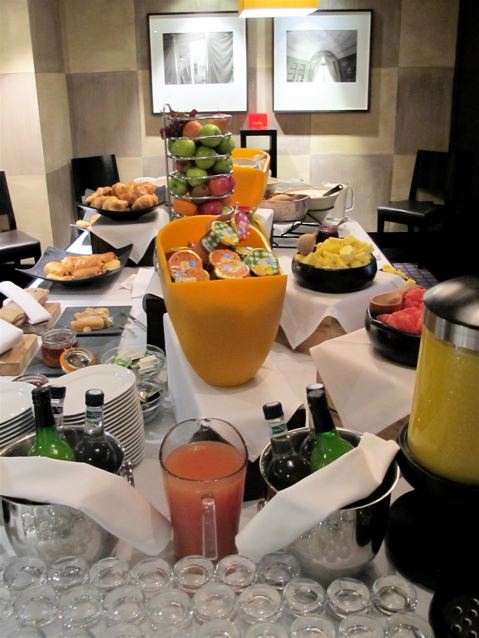 It must be a hangover from those days dragging the rucksack around the Cote D’Azur when my husband and I were happy with a dry croissant and a drink for around £2 per day that I often find hotel breakfasts over priced.
A good breakfast buffet offers plenty of choice but if you’ve had a big meal the night before, you might not feel like getting your money’s worth in the morning. 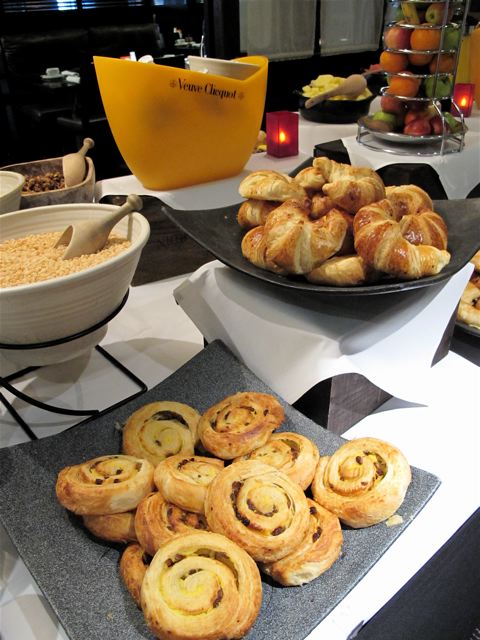 I’ve seen plenty of miserable breakfast buffets so it was a joy to behold a table laid with a wide range of quality breakfast foods at Malmaison. There were bountiful bowls of fruit, enormous loaves of artisan bread to slice from, real honeycomb, pastries, terracotta jars of continental yoghurts, fruit, cereals.
The breakfast buffet here was one of the best I have seen in the UK. It was well stocked and spaciously laid out so you wouldn’t be elbowing with other guests to select things. 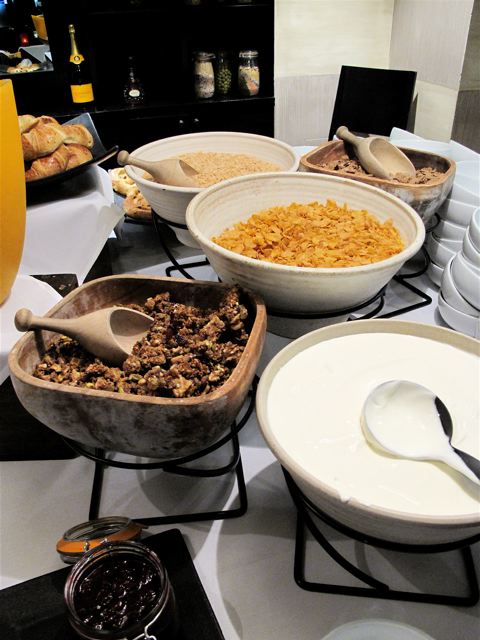 Due to the clocks going forwards the night before, we had ended up banging the doors down for breakfast at 8am and not 9am as we thought.

We knew about the time change but hadn’t realised our mobile phones had reset themselves already therefore we had put ourselves TWO hours forwards by mistake.

Happily we had extra time to stroll around the city before checking out at 12 noon. 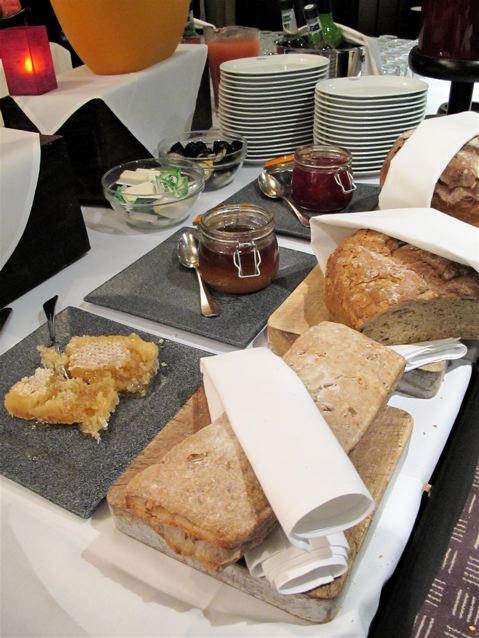 Various types of honey and compost with those lovely big loaves of artisan bread. 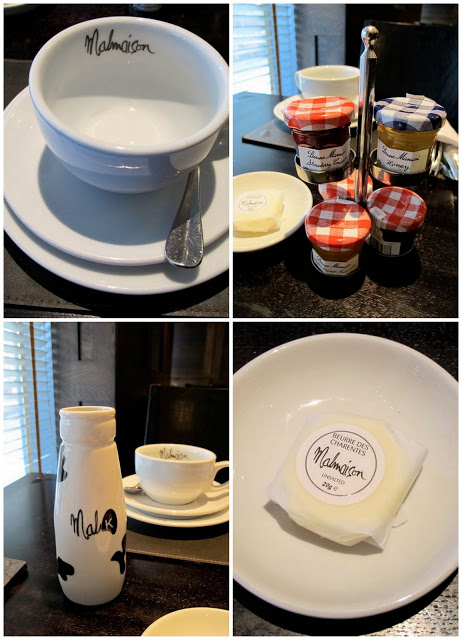 Back at the table I was amused by the milk bottles on the tables which read “Malk” and admired the table settings and little towers of Bonne Maman jam.
We helped ourselves to granola and pastries from the buffet and each ordered a hot breakfast. 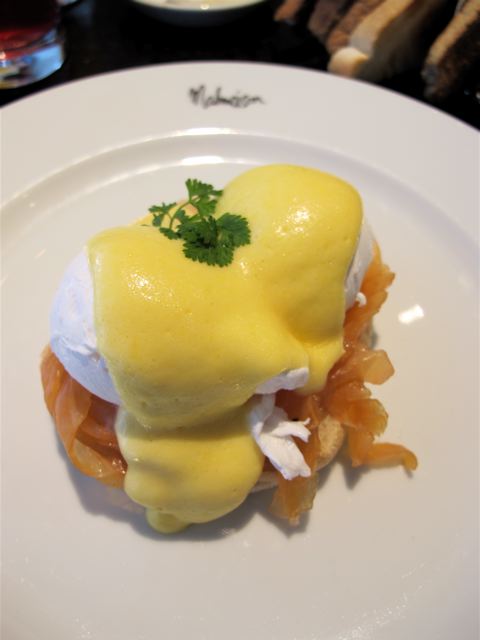 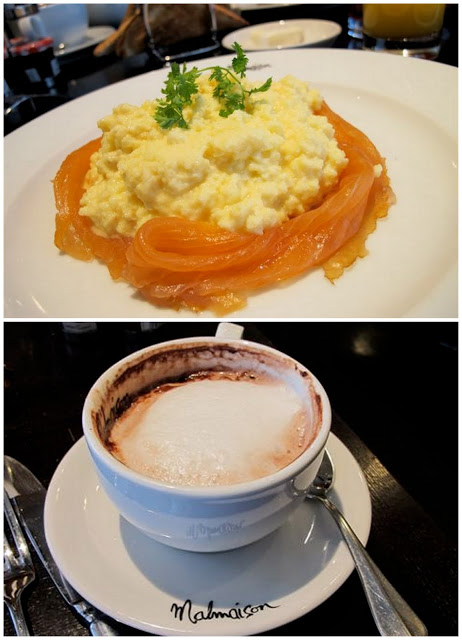 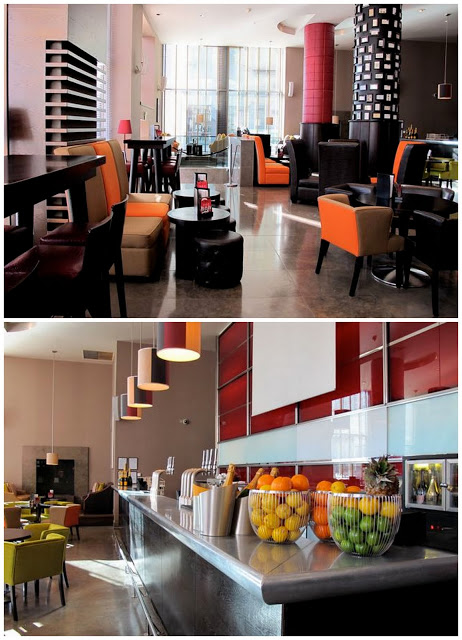 The main area of the bar now had sunshine streaming in through the windows.  The decoration is bright with various seating areas marked out in different styles. I have pictured a few of them throughout this post.
The rack rate for standard rooms at Malmaison can be as much as £200 without even including breakfast. I booked ours for £95 through a cashback website giving a further discount. Someone in front of me at checkout had only paid £85 and the in house newsletter boasted Easter stays from £69 so there are deals available.
Paying £200 to stay in Birmingham, even if it does have a wonderful new Bull Ring shopping centre, seems ludicrous to me but at the price we ended up paying, for a four star hotel, it was excellent value and a brilliant location.
I would have liked to have stayed longer, there is certainly enough to do in and around Birmingham for several days, Cadbury World, the Sea Life centre, daytrips to The Cotswolds, The Potteries and The Peak District would all be in reach from here.
So we will be back, although if we are staying longer than one night, it might be at Travelodge or, perish the thought, my father’s house. 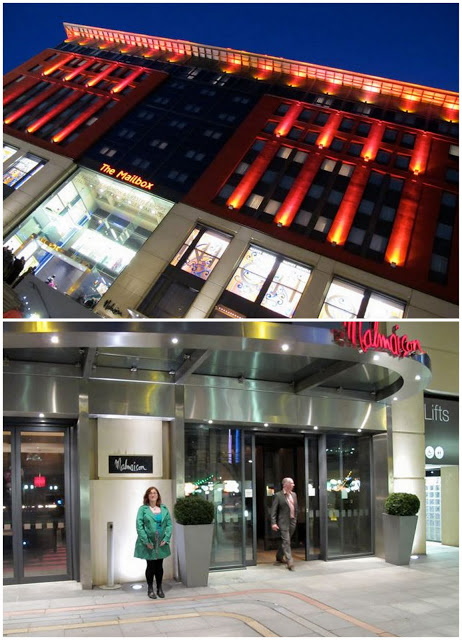