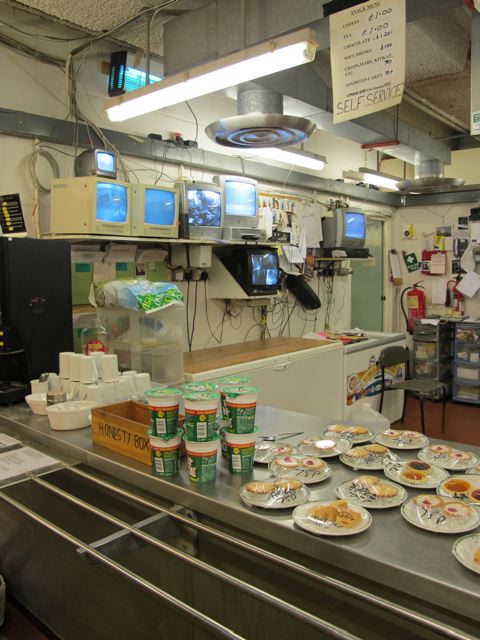 “Postcard from” is my occasional series of weekend non-recipe posts. Martha Stewart has nearly 2,000,000 Twitter followers but only follows around 8,000 users herself. Today she started following me. If she reads this blog post, she’ll probably go the way of Bob Bob Ricard and Lahloo tea and dump me pretty sharpish.
Food does feature in this post but trust me when I say it’s nothing to get excited about. Other food bloggers may bring you news of their finger smacking nights in Tayyabs. I bring you food served, well, in a place close to hell.
A carefree summer’s evening in 1986. Childhood comrade Lizzy and I were brought home in a police car after a couple of yobs from two years above us at school had thrown rocks at us which had broken my glasses. It looked like a frightening head wound but turned out to be a 3mm scar above my eyebrow. We were less than a mile away from home. Some workmen at the adjacent building site called the police.
“But you only left home ten minutes ago!” cried my mother, “What on earth were you doing all the way up there?” Just exploring the outer reaches of Stonydelph we said.
We lied. We were headed to The Bomb Shelter. An enigma to local children who fancied themselves as members of The Red Hand Gang. A mysterious bottle green concrete portal with a metal ladder stretching 20 feet or so below ground. Randomly situated in the middle of a field with newly built houses creeping towards it, soon to be encased in concrete in someone’s back garden. It looked like this. (For slightly more serious pictures try here).
We assumed it was left over from the Second World War, that it was a shelter belonging to whichever farm had previously owned the land before Barratt’s encroached on it.  Too scared to climb down the ladder, we would hang around the metal opening, discussing what lay beyond those steps and whether we knew anyone who might brave/stupid enough to go down there. 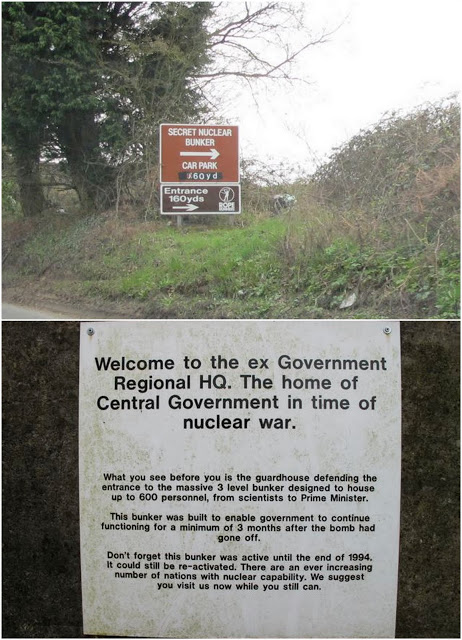 Twenty years later, whilst geeking around on the internet, I learned that our childhood hidey hole was in fact part of a network of HUNDREDS of three man observation posts across the UK to be used in the event of nuclear war.  Some were still in use until the early nineties but “ours” at Polesworth had apparently decommissioned in 1983. If you’re curious to know where the nearest ones near you were located then check out this site.
Now I knew from having read Children of the Dust by Louise Lawrence that larger shelters existed but I never in my dreams imagined I would ever step inside one.
Kelvedon Hatch “Secret Nuclear Bunker“, 20 miles outside London, now in private hands, was the nerve centre of the UK Government’s response to nuclear war until as recently as 1994.  Today it is a surreal visitor’s attraction and girl guide and boy scout sleep over venue (Note to self – do post about dreadful guide camp experience). Receiving wider attention after a feature in alternative tourist guide “Bollocks to Alton Towers: Uncommonly British Days Out”, it seemed an ideal daytrip during my father’s recent visit. 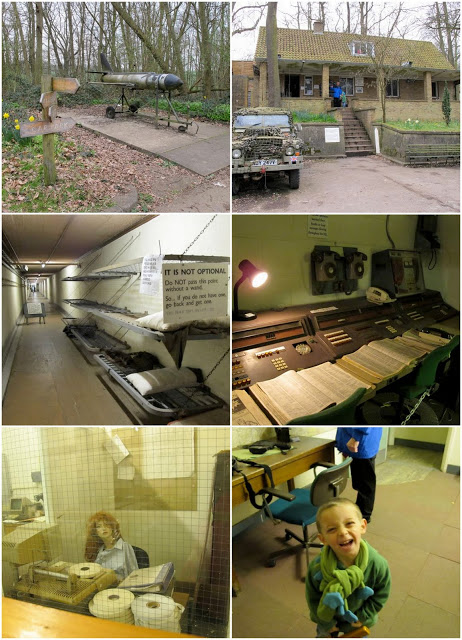 The new owners clearly have a sense of humour (well you’d have to really…), there are no staff welcoming you but plenty of signs saying you are on CCTV and that you pay £6.50 on exit or £25 if you try to bolt back out the front door.
Much of the bunker remains as it was between the 50s and early 90s. There are bizarre shop dummies posing with wigs dotted around the place giving it an atmosphere halfway between Grace Brothers and a ghost train. It takes over 90 minutes to go round. 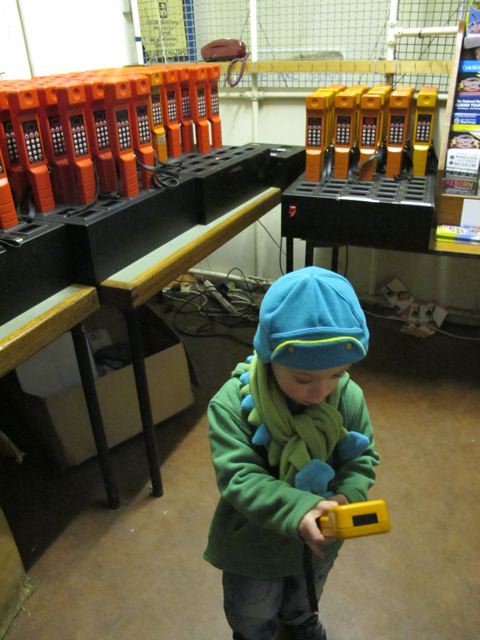 As you enter the 1950s bungalow which masks the tunnel to the bunker, you are instructed to pick up a “wand” and to listen to the recorded messages as you do the tour.  They even have a version for children – Ted was delighted with his wand and randomly pressed buttons all the way round. 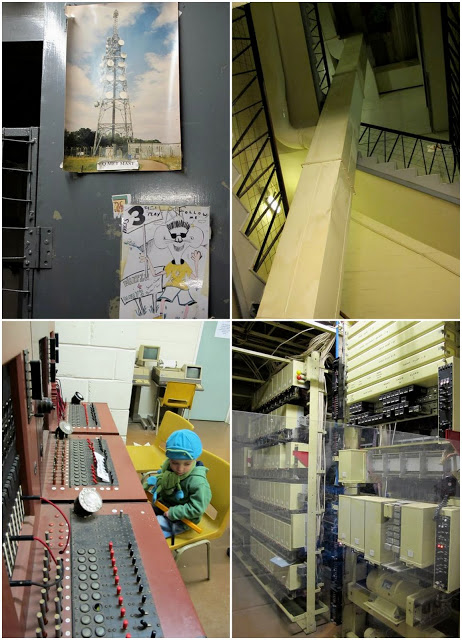 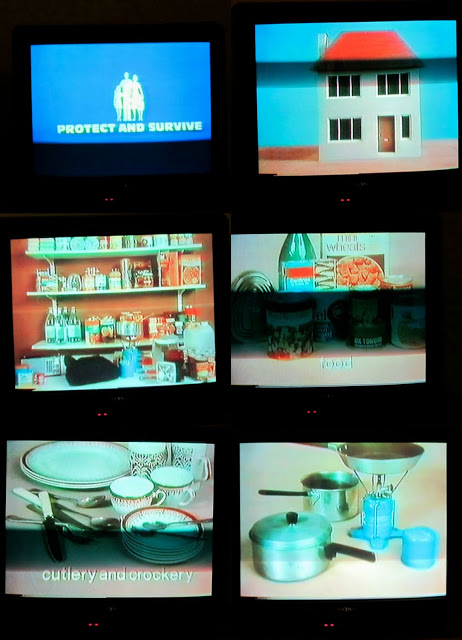 Delightful scenes from “Protect and Survive”
It’s grim enough inside but the Government public information film Protect and Survive (intended to be broadcast approximately 3 days prior to anticipated nuclear attack) leaves you in no doubt how much worse things up top would have got. Ted meanwhile was in computer nirvana in a room outside, dozens of beige specimens covered in big plastic buttons.
You may well have seen clips of this film on TV more recently but I also saw them at school whilst we were studying Raymond Briggs’ When the Wind Blows for GCSE English Literature in the late 80s. 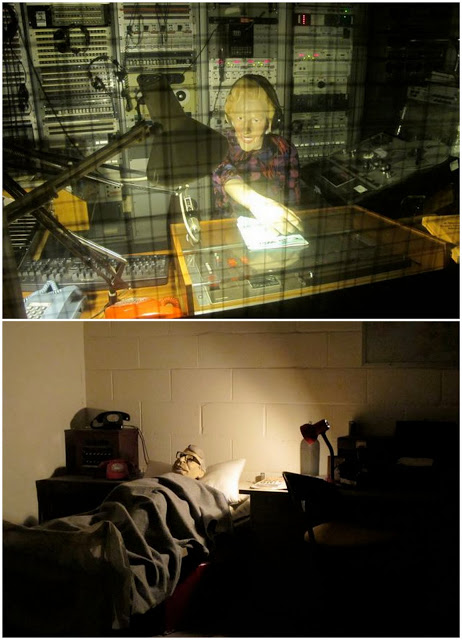 Maggie addresses what’s left of the nation from the bunker’s BBC studio.
John Major gets some kip in the PM’s quarters. 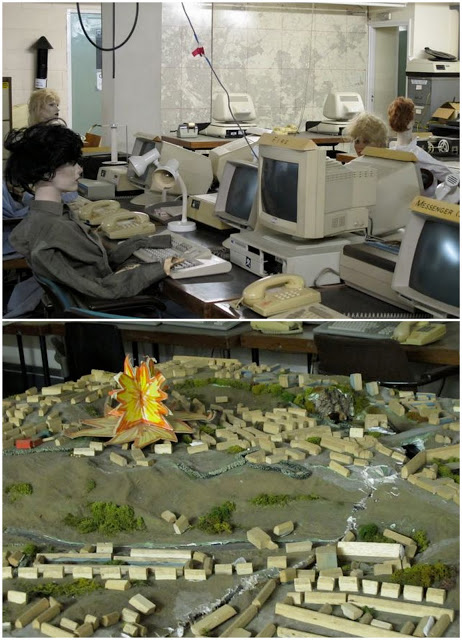 Grace Brothers meets Wernham Hogg.
“Come, friendly bombs, and fall on Slough” wrote Sir John Betjeman
There were dummies “staffing” the makeshift government office, departments each reduced to a single desk with a blackboard on the wall. With the dulcet tones of the wand recordings droning in our ears it was like being shown round by the tour guide to The League of Gentlemen’s Stumphole Cavern. We shuffled around the three levels gradually losing the will to live.
After touring the dormitories and sick bay we approached the canteen with some enthusiasm – cottage pie was on the menu and I was hopeful it was going to be at least of greasy spoon standards. 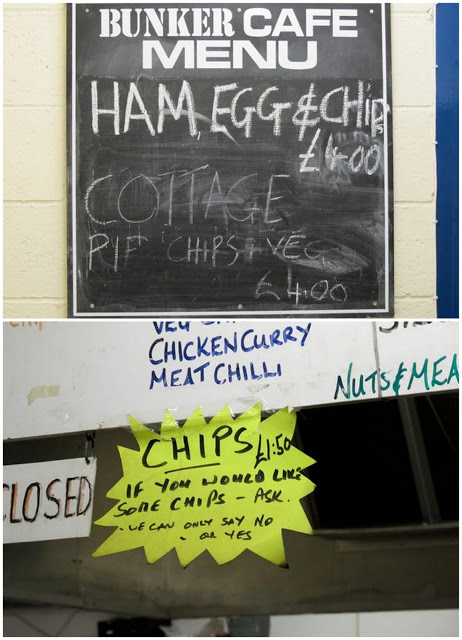 “If you would like some chips – ask. We can only say no or yes.” 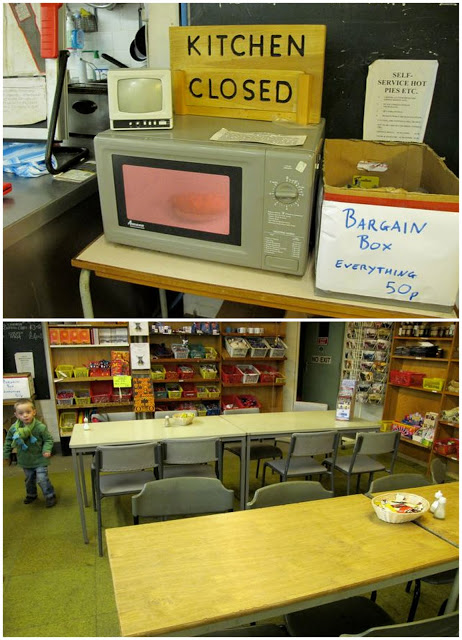 Sadly the kitchen was closed on our arrival. I didn’t realise this at first as there were two members of staff there. But they appeared to only supervise the bank of CCTV screens rather than cater for visitors. I asked for some cottage pie.
“You’re scaring us now,” one of them said in all seriousness, “We could fry some chips.” The other nodded towards an old microwave, the kind without a turntable you used to see on cross channel ferries. I nuked a cornish pasty.
We had also popped into the canteen prior to the tour to buy the £5 photography permit. The staff seemed surprised to sell one. Maybe other people are less honest. Was it for my own private use? Er well, not quite I said.  I write a blog. About *quick… think…. what?!!!* err… cafes in unusual places. The two staff looked bemused and telephoned some greater power to decide what to do. 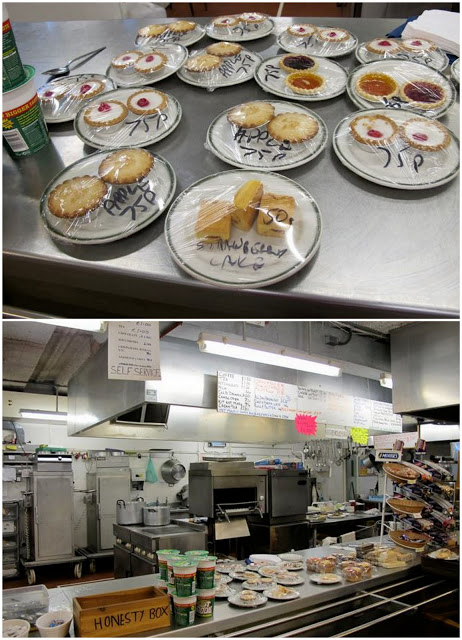 The most appetising presentation of cake I’ve ever seen. Not.
“Honesty box” for payment.
We quickly popped the fiver and later the not that cheap damage for the nuked pasty and chips in the honesty box. The staff continued to pretend they were not there most of the time although they did give Ted a (radioactive?!) lolly. 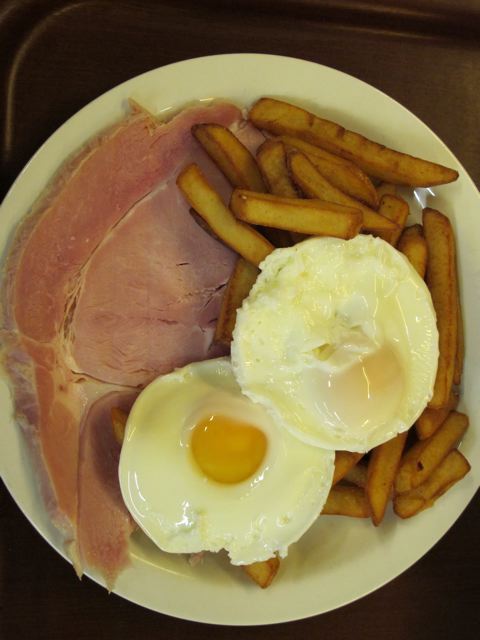 My father persuaded them to do him some ham and eggs. He got the best deal. 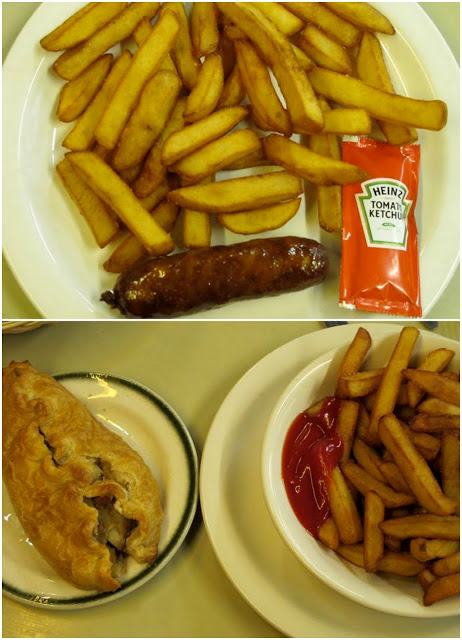 The chips were fried in re-used fat, for that authentic bunker desperation taste. The sausage looked like someone’s finger that had been in the blast. 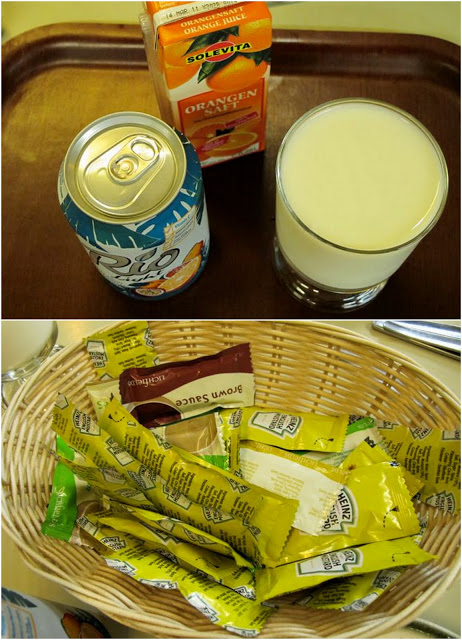 I don’t know why but my father ordering milk in cafes always makes me laugh. 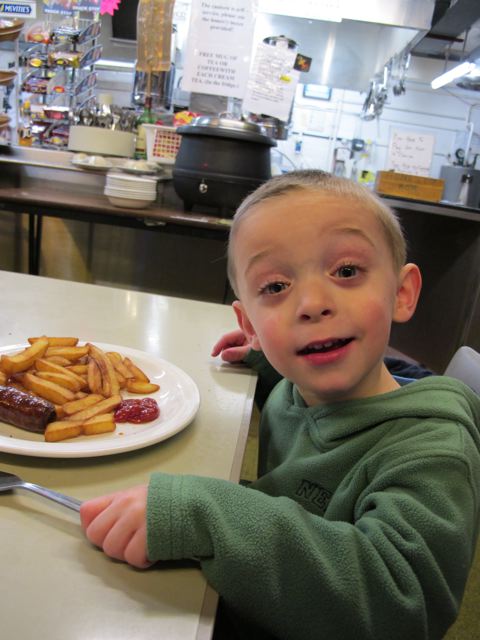 Ted was cheerful enough with his offering but I felt sorry for him and guilty to be feeding him such an unappealing meal. My pasty was definitely not Ginster’s and the chips were vile, I would have been better off with the pot noodles on the counter.
The smell of reused fat and stale air generally really started to get to me in the canteen.  When I picked that day’s t-shirt out of the washing basket 48 hours later the stale smell really hit me. It was quite revolting. 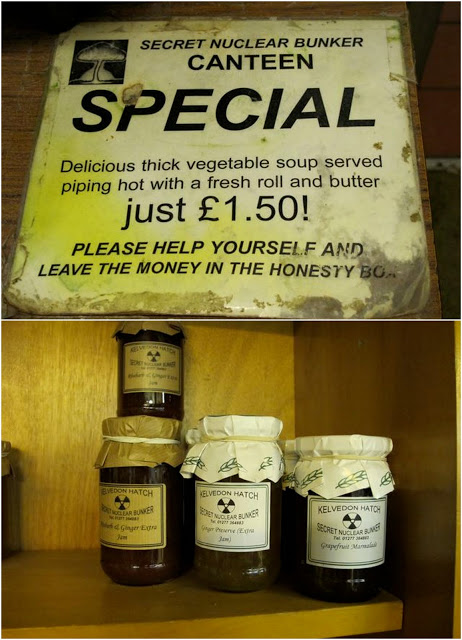 The concept of anything in this canteen being “special” struck me as ironic.
You can even buy Nuclear Bunker jam to take home.
Despite the appalling food, I would definitely recommend Kelvedon Hatch as a day out. It is fascinating in a morbid kind of way.  And as the sign on the way in says, with the increasing number of nations with nuclear capability and terrorist threats, the site “could be put back into service at any time so you’d better visit whilst you still can.” 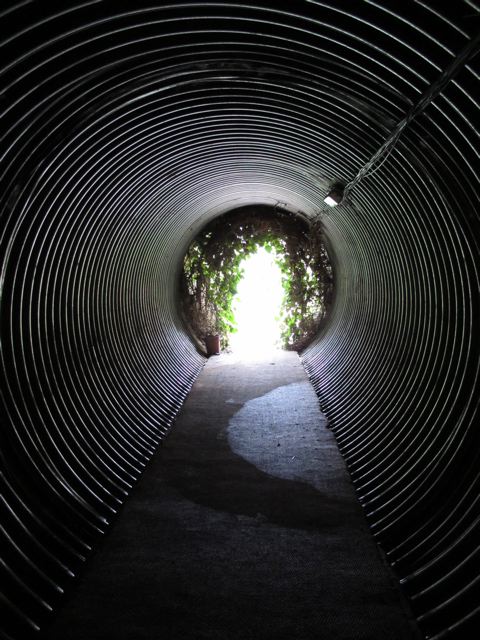