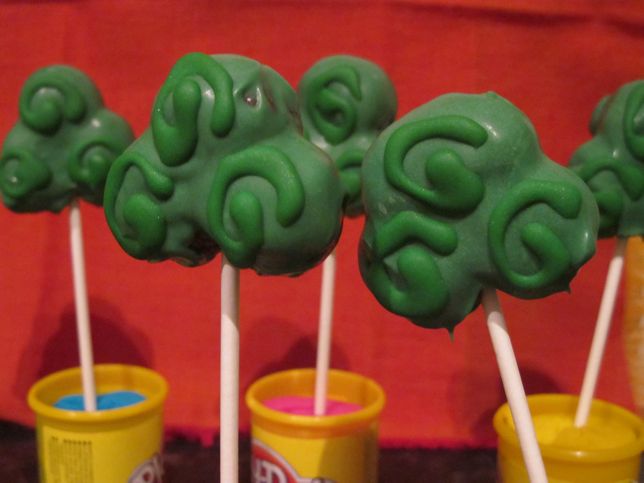 Today I’m not up to cooking so it’s just waffle. And before you get excited about waffles, actually it’s just dodgy looking cake pops.

Service has been stalled this week as I sit drinking shot glasses of throat spray and popping ibuprofen by the clock. It’s not all been bad, I’ve caught up with all the foodie telly on the Virgin box and sat on the sofa reviewing a pile of cookery books.

Lack of energy for neither my husband or I to go food shopping impacted on what I served up (or more accurately, wearily dragged out) for dinner.

The fridge is virtually empty. The husband is complaining but I rather like it. “The great thing about not having much food in,” I tell him, “is that you get to eat a variety of things you might not otherwise.” This is my justification for feeding him meals based on pulses and dried goods.

To say we’re out of food is misleading. We still have an unbelievable amount of condiments, jams, chutneys and pickles. We have a selection of sugars and flours; various dried fruits and nuts, a wide range of tins and a few sachets. We have enough bread for the next thirty six hours and a fair amount of fish in the freezer.

But we are devoid of butter or margarine (reduced to spreading mayo on toast) and have just finished the eggs, mushrooms and onions. 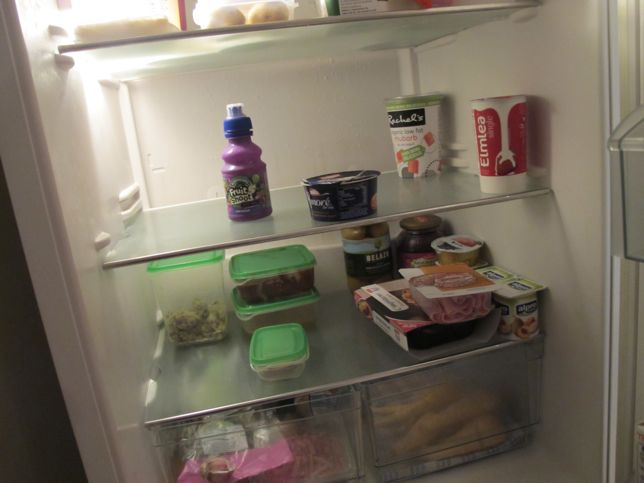 I can’t face driving to the supermarket. Time for a trip to Walthamstow Village’s fabulous branch of Spar. Carrying the two bags home wipes me out for three hours.

The yogurts, cream and parsnips (in drawer) you see here came from my journey out. So apart from emergency lemon, yogurt, cream (supposedly for potato gratin with last of the potatoes and the month old bag of sage), reduced bulb of fennel and bag of parsnips, you can see how little was left. Fresh food wise, we’re down to three pots of bits of left overs, a Weight Watchers sausage and mash meal, three soya yogurts, some wafer thin ham and a jar of preserved lemons. And some left over chocolate buttercream which you see used in the cake pops. Interestingly, I scan what is left and realise there is still enough to form several evenings’ worth of dinners without yet having emptied the freezer.

Doing a stock take when you think supplies are low is quite a sobering exercise, especially in the light of this week’s news from Japan when you compare what having nothing left really means.

I’m a bulk buyer, if I see something on BOGOF or significantly reduced that I normally buy, I tend to stock up on it. (Admittedly a cellar or garage is a bonus if you want to do this). I wouldn’t say we waste food especially, indeed I horrify my mother by happily serving food that is on it’s judgement date rather than BBE, but certainly I feel we could be more efficient using the frozen foods and dried pulses and grains I keep “just in case” for weekly meal plans.

Possibly we can fool the purse strings a bit longer in April – when various government cuts (and hikes) kick into the family budget. 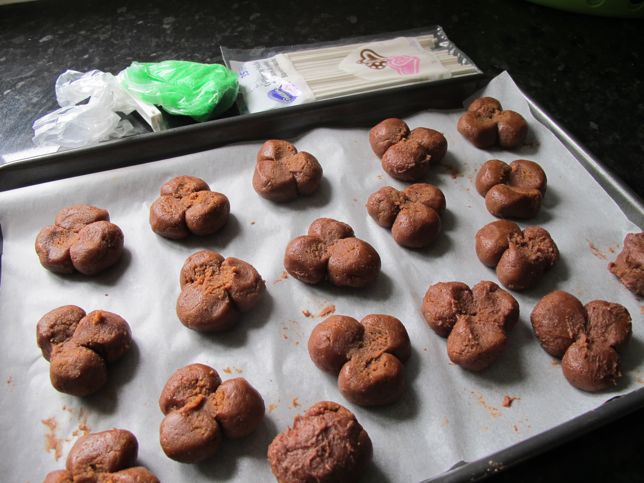 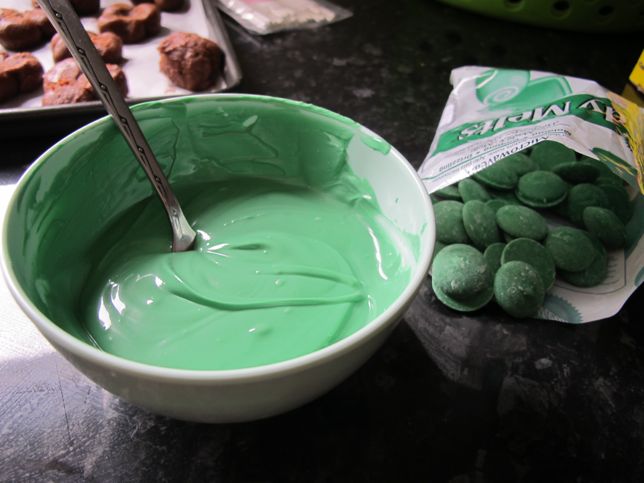 This is a very round about way of explaining what’s been going on this week, the whole family were ill and despite my husband’s concerns about the dwindling contents of the fridge, we didn’t go hungry.

It also accounts for my cake pops – I had planned to become one of those nutters who bakes a cake and then grinds it up to make cake pops, I really had, with Nigella Lawson Guinness Cake no less. I was going to get clever with Guinness buttercream and invent some new amazing Guinness caramel syrup.

Instead I was ill and didn’t go shopping. I started to feel guilty about the two McVities’ golden syrup cakes sitting in my cupboard and chocolate buttercream was one of the few things I did have in the house.

So if you’re insane enough to make shamrock cake pops yourself, get your whooshed up shop bought cake and mix with butter cream. The compressed cake and buttercream mix is split into golf ball sized blobs which you then roll into 3 smaller balls and press together in the centre to make a shamrock shape. If you’re new here you may not realise I do an occasional speciality in comedy turds.

Next you get out your evil kermit coloured candy melts. I made a special trip to get these from Hobby Craft in Harlow (not this week I stress). We got stuck in traffic meaning it was a mad dash before driving home for a Sainsbury’s delivery. Thing was, I made the mistake of saying aloud in the car, “Oh look Ted! They’ve got a Toys R Us here” which meant the second we got out the car I was met with “We go to Toys R Us mummy, we go to Toys R Us?”.

Yes, ok… we go to to Toys R Us Teddy and buy a giant bottle of bubble mixture. Then we run to Hobby Craft for evil green candy melts and run back to car really fast. I managed to get back in time for the shopping but my intention to have a leisurely half hour in Hobby Craft baking section was totally scuppered. 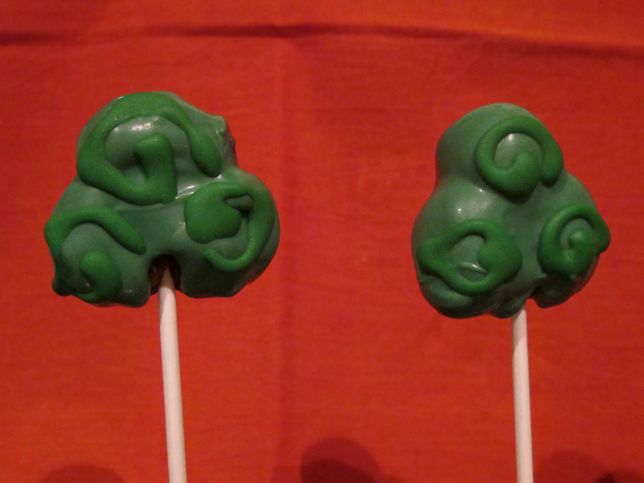 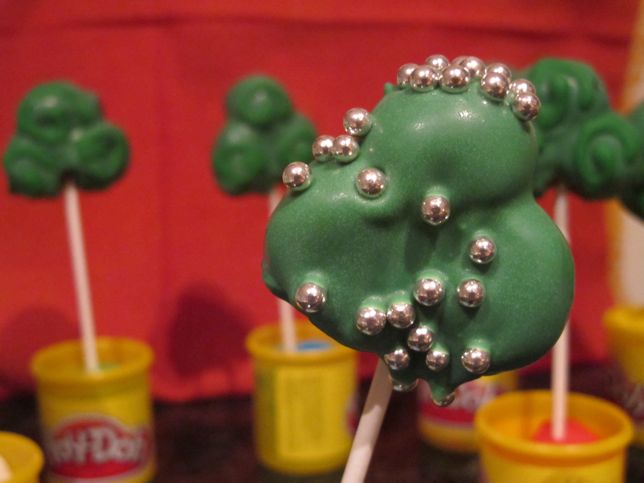 Well, my inner Bakerella must be sick too as I dipped these buddies in the melted candy melts and found they looked a bit well, gruesome. Frankenstein cake pops any one? Aliens? Incredible Hulk? Simply whip out the evil green candy melts and there you go. Then I had really silly idea about trying to redeem them with a bit of sugar ball bling but they looked even worse.

Then I got all cocky with royal icing thinking that two days with Peggy Porschen last week had turned me into some kind of piping supremo. Sadly I appear to have left my Peggy magic at the door in Belgravia – it is quite alarming to think I managed to beautifully decorate a two tier wedding cake with life like sugar roses and then seven days later all I can come up with are these. 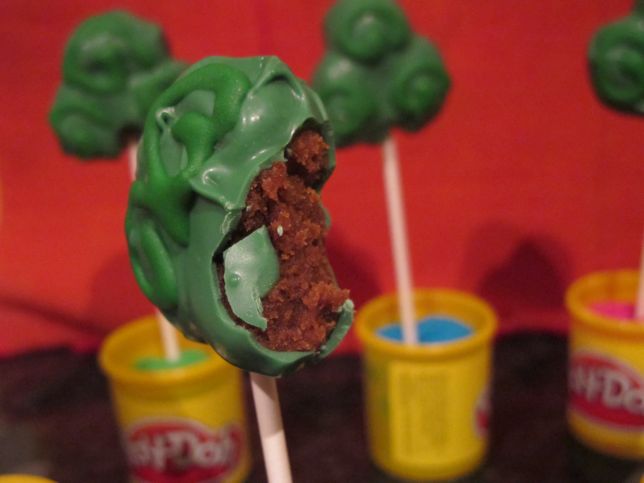 Just to prove there is cake inside. I quite like how this one looks like an alien with its mouth open.

Does this happen to Bakerella? Is Angie Dudley’s bin full of cake pop horrors that never made it into the book?

I’m sending these – for better or worse to Aoife at The Daily Spud for her Paddy’s Day Food Parade which was a rip roaring success last year and this time round I was determined to take part.

I will leave you with proof that not everything green I touch is terrible. Granted I’m a useless gardener but green is my favourite colour in the kitchen and I have quite a collection of lime green goodies that brighten the place up. 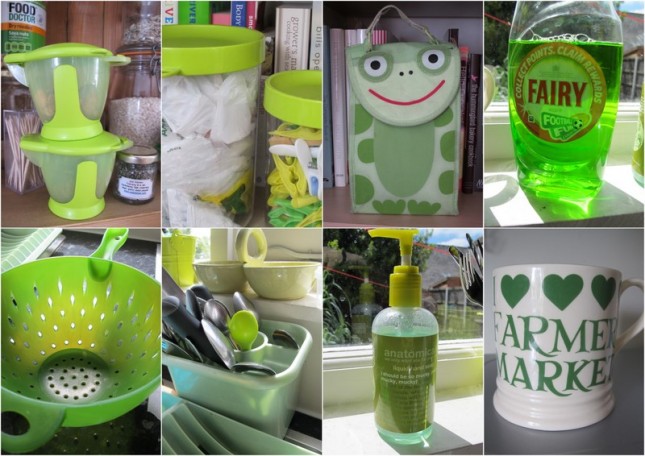 So instead of Dublin, I leave you with spring like green objects from my kitchen. Another way I’m just making use of my left overs….

I hope you’re having a happy, healthy week. 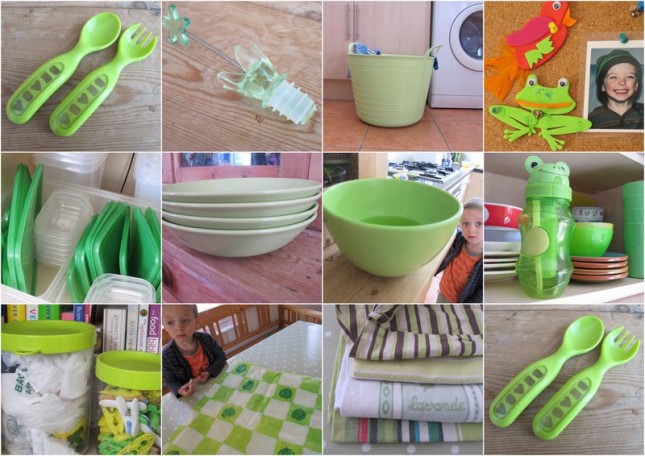