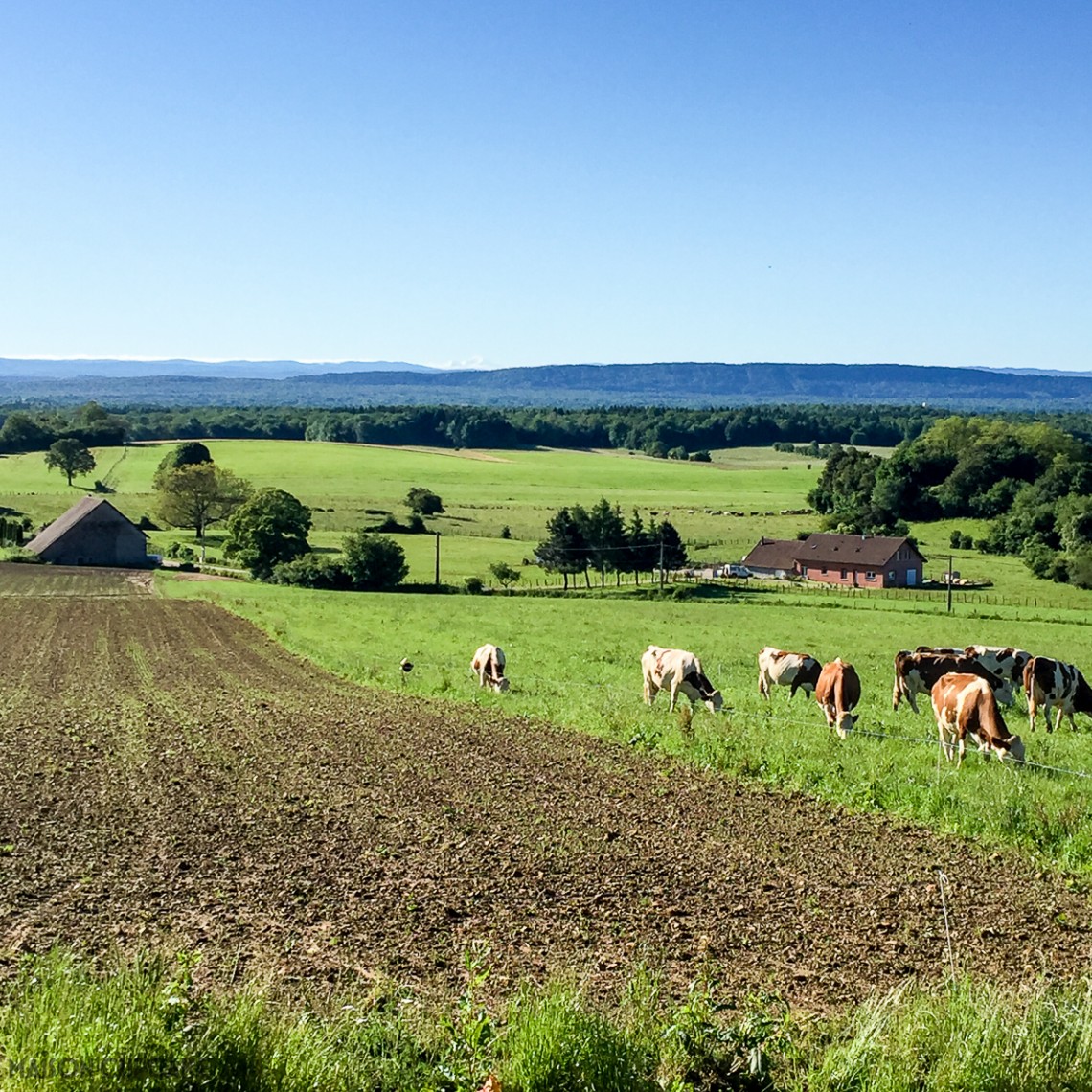 Jingle jangling within earshot of Plasne’s dairy, the milk from these cows is well within the 25km transportation limit between farm and dairy required to produce Comté cheese.

The dairy, or fruitère, is where the magical process transforming raw milk into young cheese must occur within 24 hours. These new wheels are destined to acquire Comté’s prestigious PDO (Protected Designation of Origin) status recognised the world over. They will be looked after at the dairy for around four weeks before moving onto “affination” at a nearby cheese ageing cellar.

We are at Plasne guided by cheesemaker Sébastien Ozérée who is decked out in clothes matching the colour of the milk; white wellies, white cut off shorts and naturellement, a white t-shirt displaying Comté’s green cows bell logo.

During my trip hosted by Comté cheese earlier this summer, my preconception that a dairy was a chilled dark place was banished. I discover instead, early in the morning with the sun streaming in through windows, dairies are hot sweaty places. Sébastien is most sensibly dressed for the work involved.

The Craft of Comté Cheesemaking

The craft of cheesemaking is definitely not a passive process where the cheese merely sits waiting. No – the cheese, transformed out of unpasteurised milk, is very much a living solid mass a hive of bacterial activity throughout its creation.

The liquid gold arrives in the form of raw milk whose precious live cultures must be kept stable at 12c since yesterday’s milking. The quality of this milk and the rennet added to it are the primary influence on the outcome of the cheese. Pouring the milk into copper chambers with rennet to mimic the process of calves’ digestion of their mother’s milk, the dairy will produce 1500 wheels of cheese each month.

Raising the milk temperature from 31-56c in 35 minutes, the daily milk from around one hundred cows will be enough to make six wheels’ worth of Comté from every copper chamber batch.

The enzymes in the rennet trigger the process of separating the milk into curds and whey. Even today with mechanisation, the hand of the cheesemaker dipping their hand into the curds is an essential part of the skill required to make cheese. They gauge when the solids are dense enough to move to the next stage. The cheese solids are pressed into new wheels, their rinds marked with that day’s production date for easy reference later in the cellar. Day and night, over the course of 3-4 weeks these young cheeses will be carefully turned and rubbed with salt to preserve them.

No one yet can tell when the wheels of cheese will reach maturity. Maturity could be reached after 4 to 30 months. The season when the cow has been milked influences the flavour profile but the young cheeses are passed into the care of the “affineur” or cheese cellar master who will judge the optimum window to eat and sell. A few may be not even be deemed worthy of Comté classification, such is the emphasis on quality.

The scale of Comté cheese production

There is market demand is available for Comté of all ages, from young mild cheeses to older golden ones. The objective is not to produce large quantities of aged cheese – even if this is lots of peoples’ favourite – but the best quality possible. Technology plays a part to maintain standards and efficiency but never at the cost of comprising the end product.

Meanwhile elsewhere in the Franche-Comte region, over 2500 more dairy farms spread over 230 square kilometres of Jura mountain pasture are also sending their milk to 150 other dairies to make cheese too. The local cooperatives proudly work together to maintain Comte’s growing global reputation; it’s the area’s best known export inside and outside France.

The French still eat 80% of Comte cheese by themselves but the rest of the world is understandably developing a taste too. We will explore that all important taste in a later post. 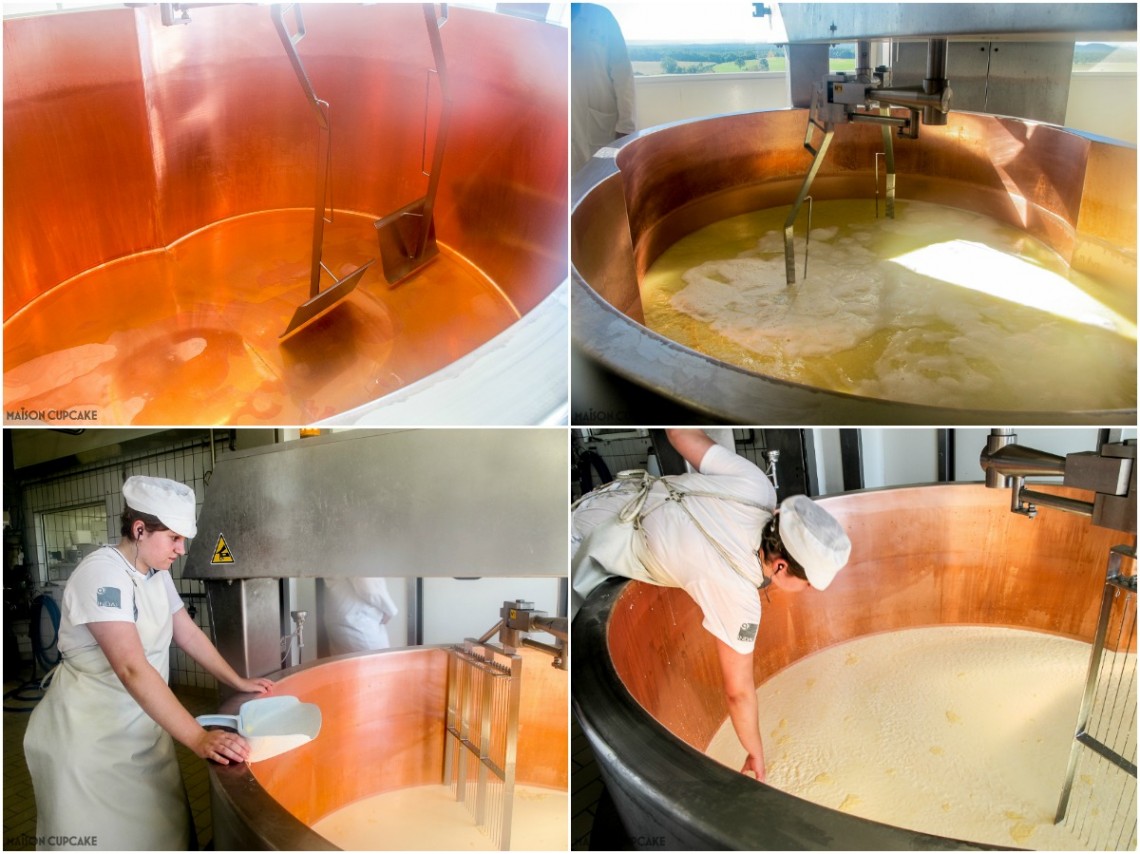 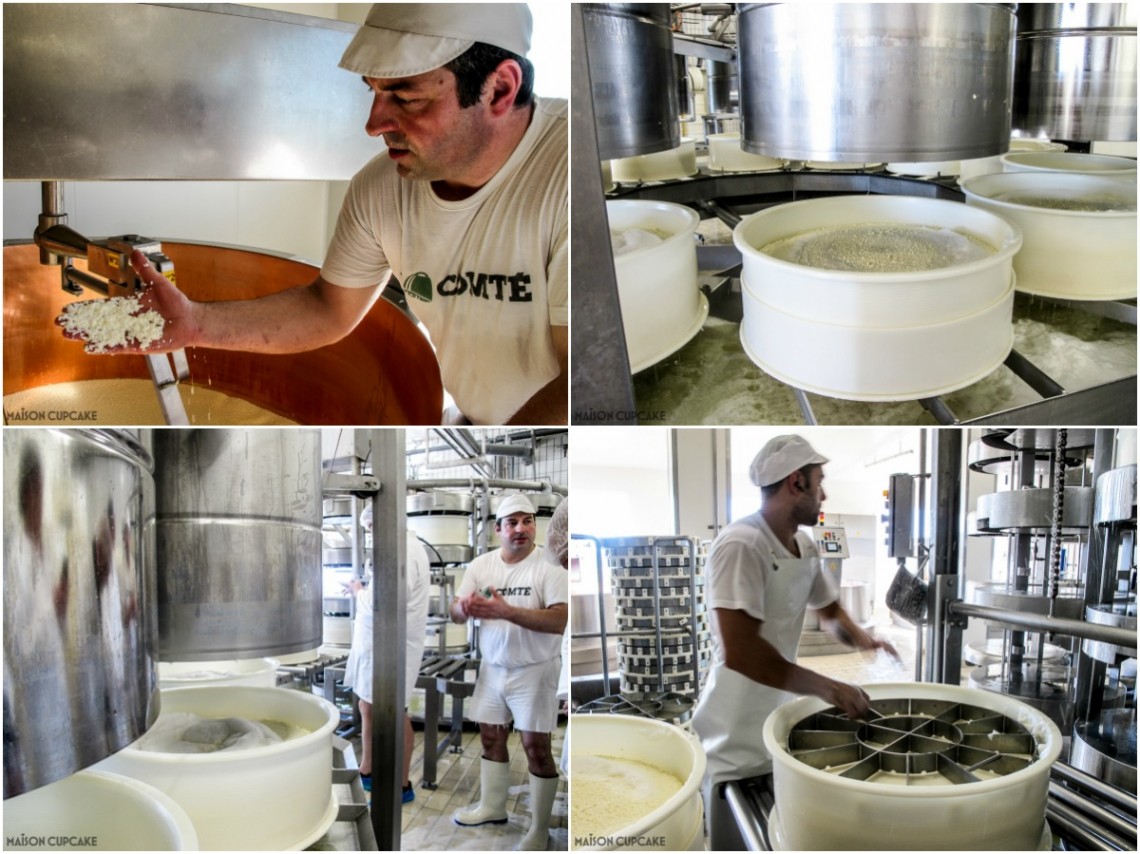 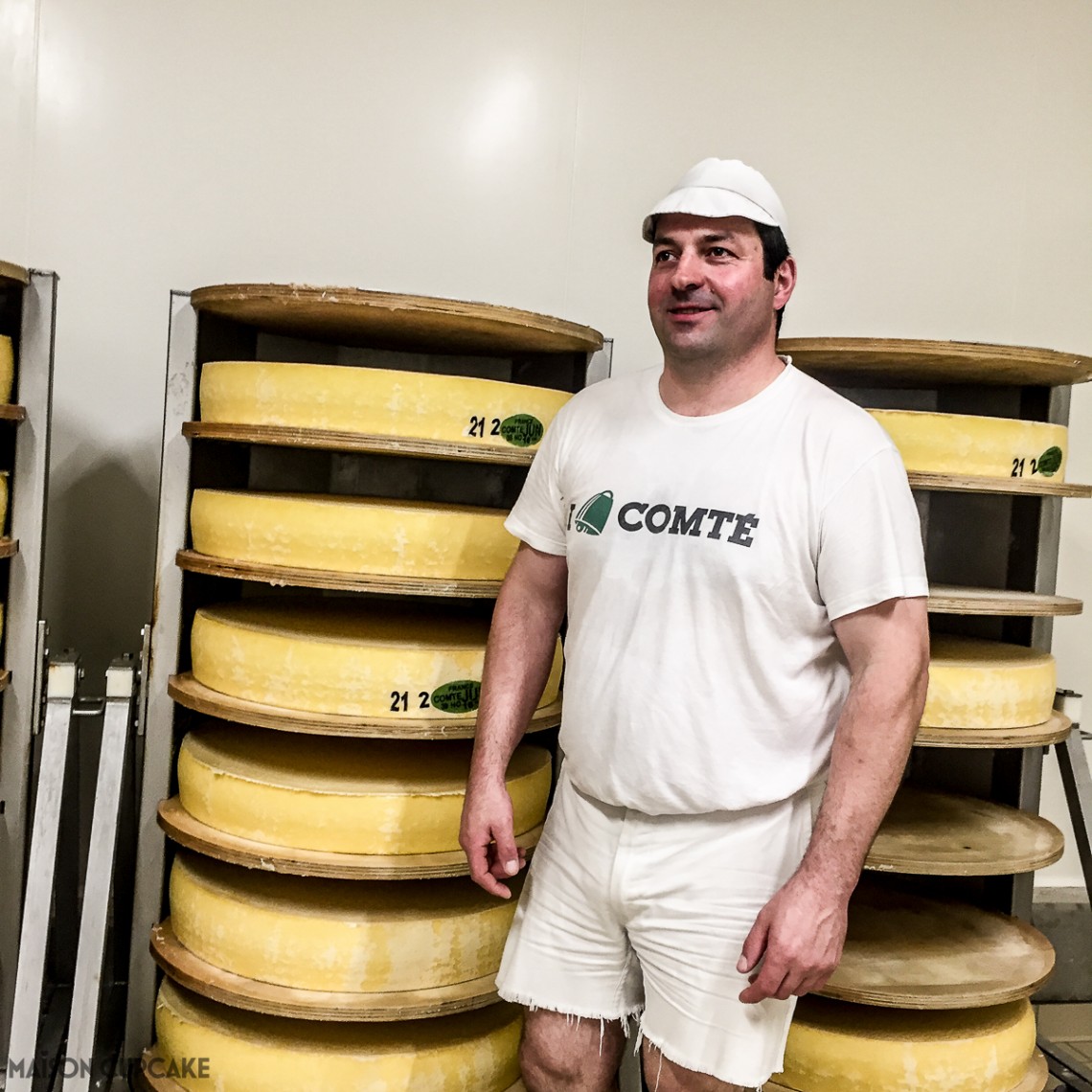 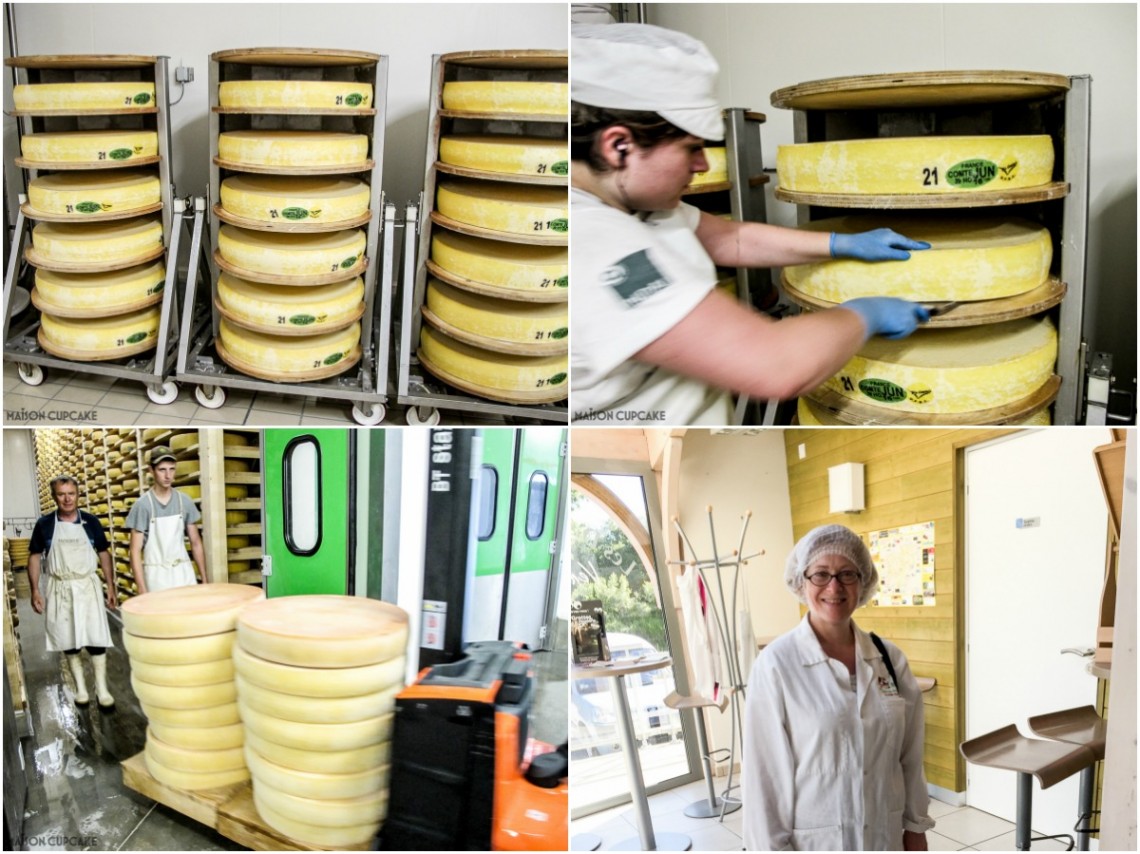 The next post in this series will look at the ageing or “affinage” of the cheese in nearby cheese cellars. If you wish to visit a Comté cheese dairy as part of a trip the Jura, Comtés French site has a list of fruitières open to visitors as part of Les Routes du Comté.

I travelled to the Franche-Comte region as a guest of Comte cheese. Find out more about Comté at ComteCheese.co.uk or following their UK Instagram and Facebook accounts.

See also the first post in this series The Cows Who Keep the Wheels of Comté Cheese Turning.