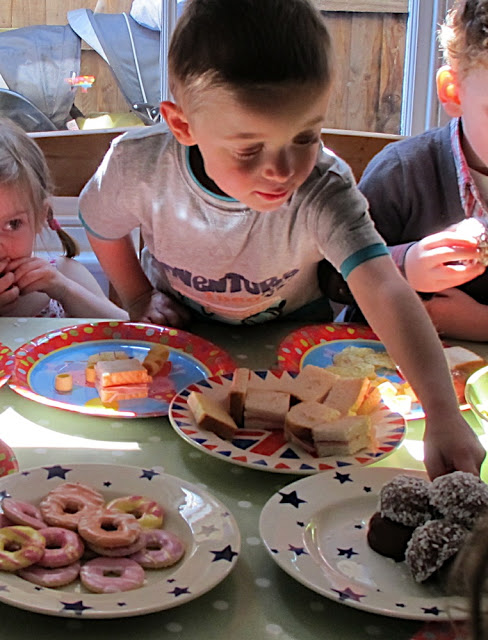 My submission to The Gallery for the Cybermummy Photo Competition
Theme: “Motherhood”
Organising birthday parties was probably my main incentive to have a child. Daydreaming over Nigella Lawson books about having a little helper to stir the batter and plead whether they can lick the bowl out yet. Studying complicated animals made out of food in Australian Women’s Weeklies. Imagining a table laid out with a sugar coma inducing spread with paper plates and matching table cloth. Musical bumps and cups of squash getting knocked over.
As a child, birthdays are distant high points that gradually creep nearer with agonising slowness until the day itself flashes past. As a mother, my son’s birthdays seem to pop up unexpectedly in the midst of whatever other fire fighting mayhem I am dealing with at the same time. 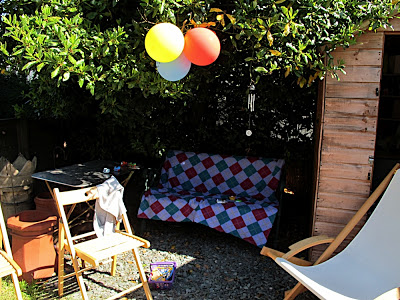 Calm before the storm
His first came too soon, but then he wasn’t really a year old yet. An upside to his early arrival is that he celebrates his birthday in mid June instead of late August. I had been worried how these long anticipated birthday parties would pan out if my child had been born in the school holidays and his friends were away. Instead Ted’s birthday falls in Royal Ascot week, just before the longest day, one week before my best friend’s birthday at the start of Wimbledon fortnight and three weeks before mine. It is my favourite time of the year. 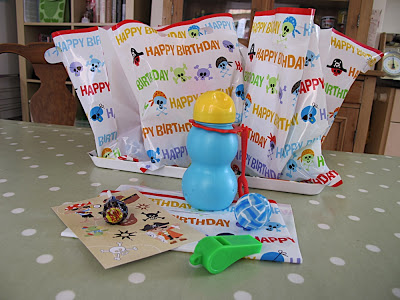 Party bags; bubbles, pirate stickers, rubber ball,
whistle, chupa chup and later of course, CAKE
For his second birthday we were on holiday so this was his first party since he was one. Given that I was still dealing with a small baby the equivalent of nine months old then, everything was a lot easier to arrange. Better still, Ted now understands the concept of birthday parties and was getting excited about presents and cake. 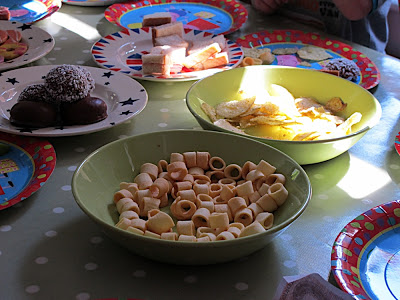 8 toddlers, 2 new babies, 2 ankle biters, 8 mummies and 1 easily stressed daddy. Would Ted freak out and have a two hour tantrum? Thankfully not, I’m pleased to report he enjoyed every minute of it and basked in his status as Birthday Boy.  He wasn’t amused by the badges though. 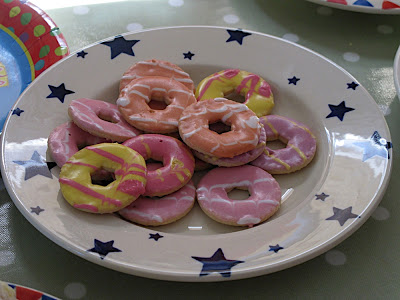 It was a mid afternoon party tea. Confident in the knowledge that everyone would have a good lunch behind them, it was green light for biscuits, crisps and cake!  I’m not one for carrot batons and bread sticks on these occasions, I’m from the school of thought that this never did me any harm when I was young.
Apart from the cake, there was nothing complicated and everyone loves it whatever. At his first birthday, guests were delighted by disposable plastic cups filled with strawberries, 2 mini meringues and a drizzle of chocolate sauce. Desserts served in plastic cups are becoming my party piece! 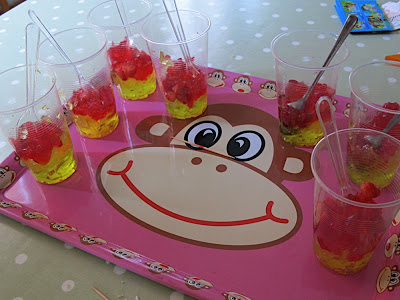 This time it was traffic light jellies. Red, yellow and green jellies, made just that morning and plopped into plastic cups in reverse order. There were chopped strawberries in the red jelly for anyone whose conscience was pricked by lack of fruit or vegetables being served. 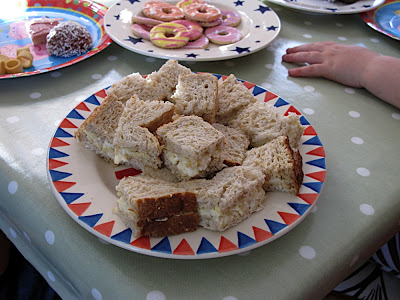 Our full menu was:
Marshmallow chocolate teacakes (1 pack plain, 1 pack with dessicated coconut)
Hula hoops
Kettle chips for the grown ups
Party ring biscuits (sorry Claire, they remind me of Charlie and Lola)
Sandwiches – 2 rounds each of 2 fillings; grated cheese and ham, cut into nines instead of quarters (the perfect amount and size for little mouths and peckish mummies)
Traffic light jellies with chopped strawberries.
For drinks, a jug of squash in the garden for children…. 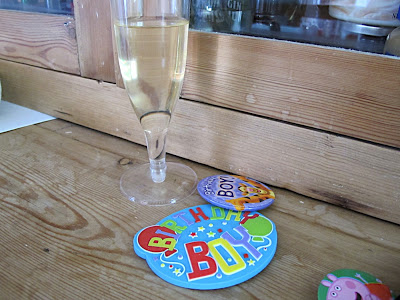 …and 2 bottles of Cava in the fridge for grown ups! 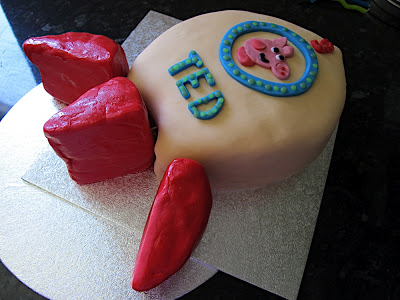 Last but not least, the cake. A Peppa Pig rocket. More details how to make are below.  It was oddly unstressful making a cake for myself. I started decorating it at 11pm the night before knowing I was opting to not bother with any piping or covering the board. Admittedly I would have preferred to cover the board with dark blue fondant and white stars but I’d misjudged how big the red fins would get when covered with fondant meaning it wouldn’t all fit on one board anyway. 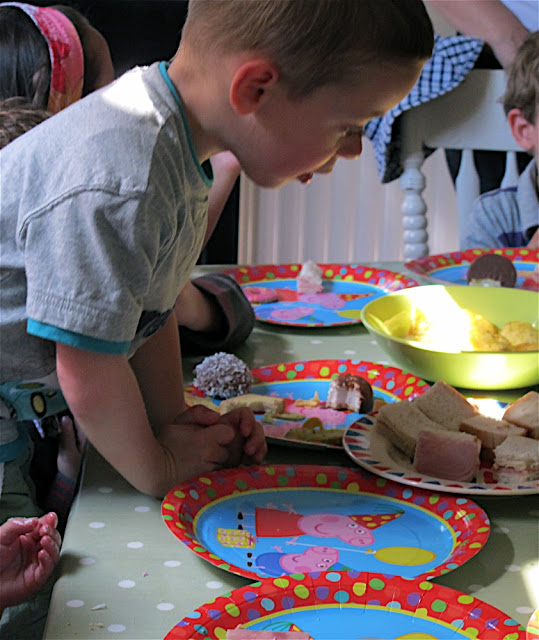 To match the Peppa Pig cups and plates. He also had a Peppa Pig classroom set as one of his presents. 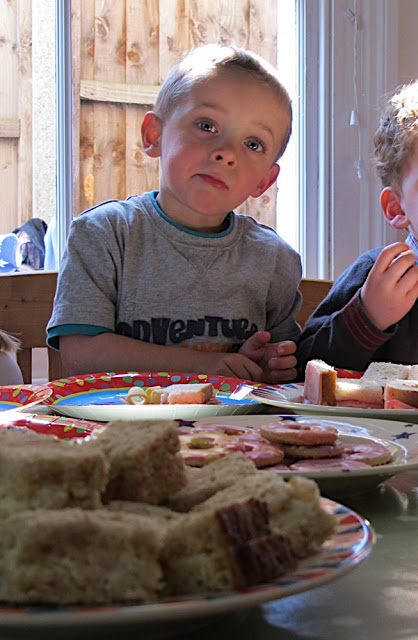 No stranger to the camera as you can see. 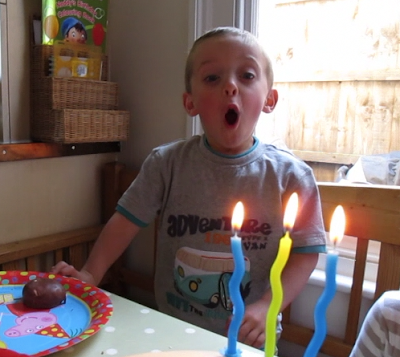 Blowing the candles out took several attempts. It was actually me who did it in the end but he thinks it was him.  This wasn’t a photo, I freeze framed it from film. 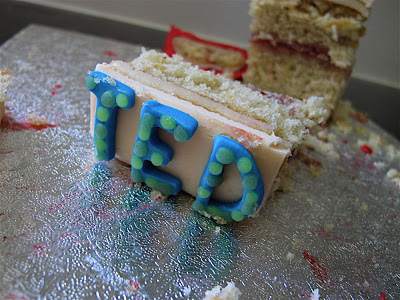 There was not a lot of cake left after party bag slices dished up but that’s fine as there’s not exactly a cake shortage in my house especially with me catering for this event at the weekend. Extra slices for husbands were popped into a couple of them! 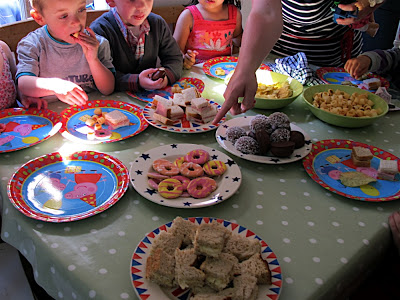 Two and a half hours passed without hitch. Naturally the house and garden were a complete state, even the bathroom ducks had made it outside to the garden. I was sad when it was over as it would be another year until we could do it again and I reflected that there would be a finite number of birthdays where children are satisfied to sit at the kitchen table rather than demanding a trip to the bowling alley. 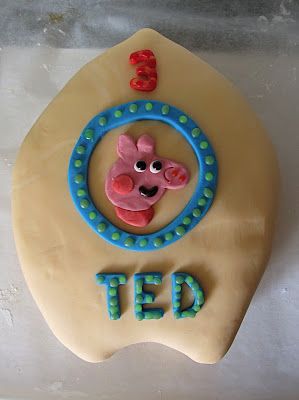 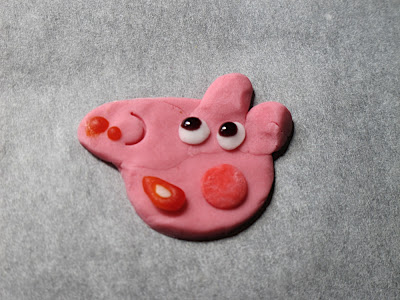 This pig is George, the little brother. I made him as a spare. 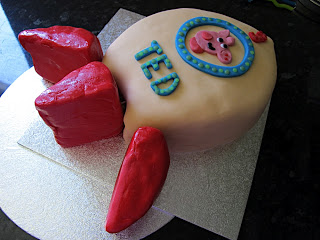