Home » When Bing filmed me giving a cupcake demo 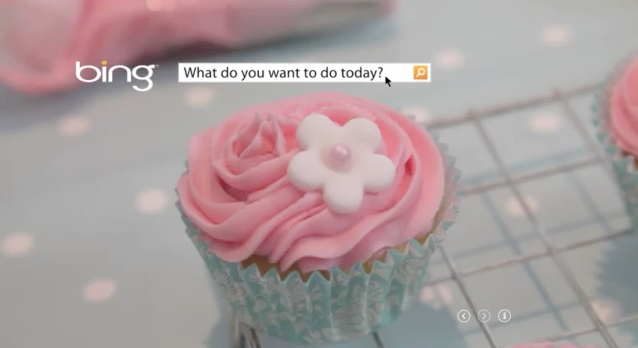 For around fifteen years after Tainted Love was number one, Marc Almond refused to perform the song that made him famous.

Tainted Love became an albatross he said, not representative of his usual material. Too fluffy and commercial. Sometime around the millennium there was a Soft Cell reunion tour and he caved in to giving the audience what they wanted. I believe Tainted Love is now regularly back on the play list and the fans happier for it.*

I feel similarly about blogging cupcakes. They’re what people associate me with, heck I shouldn’t be surprised since my site is called Maison Cupcake.

But if you look back through my archives you’ll see I went eleven months not blogging any cupcakes. And that the previous cupcakes blogged were eleven months before that. So in three and a half years of running a site with cupcake in the title, I went nearly two years of them without blogging about cupcakes. (Although it does amuse me my ‘link within’ widget seems to have found them all at the bottom of this post)

‘Oh… so you blog about cupcakes then do you?’

‘Well I did a bit in the first couple of months but not so much now.’

I have this conversation all the time. I’ve agonised about rebranding and relaunching with a new name but never come up with a name I liked any better.

Meanwhile I find myself in bizarre exchanges with people where they refuse to comprehend that I am not a cupcake business and rarely publish cupcake recipes. I can see why they’re confused.

People come out with the most disparaging rubbish about cupcakes, from disproportionate hatred to claiming they’re the antithesis of feminist principles. They’re cakes for god’s sake, they’re just smaller than big cakes.

Cupcakes, like page 3 girls and Barbie, are not going to disappear in the immediate future. If for no other reason than they’re highly convenient to transport to bake sales and come ready packaged in individual portions.

And whilst I cannot comment whether Marc Almond received more royalties for Tainted Love than the rest of his thirty year back catalogue put together, I can see on this site that it’s two of my fluffiest cupcake and cake pop numbers that are my top performers.

So I think it’s time to get over fluffy and get back to making a few cupcakes. I have various bake sales for school etc coming up and it makes sense to use the opportunity to blog about them.

As a precursor to this, the search engine folks Bing asked me to make a video with them about making, yes I know, vanilla cupcakes. Even if you don’t like vanilla cupcakes, I hope you enjoy the video – filmed in my rather empty new kitchen.

If I look a little startled, it’s because they kept asking me to ‘look lively’ and ‘be enthusiastic’. Instead I look spaced out and a possibly a bit mad. Enjoy!

*Personally I’m gutted to have missed his ‘Torment and Torreros’ gig at this year’s Meltdown. You can keep your Tainted Love for parties and wedding discos but that’s another matter….