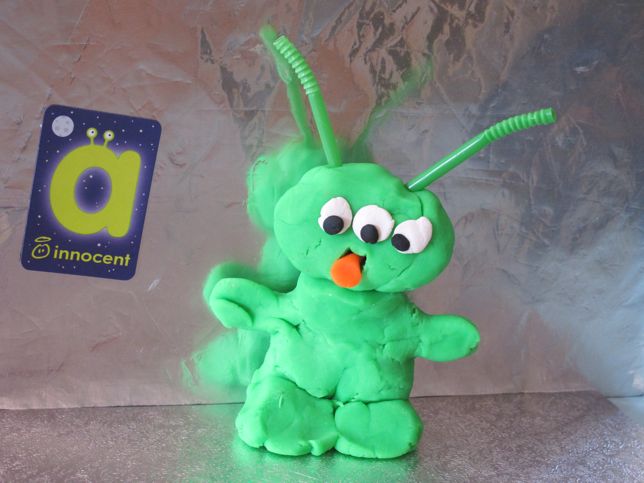 Two brands of children’s soft drink appear to be giving away alphabet fridge magnets at the same time.

The nicer of these comes from Innocent Drinks and I was fortunate enough to receive a full set last week in return for creating a picture representing the letter A to kick off a series of mummy bloggers displaying pictures for each letter of the alphabet.

I have a soft spot for Innocent as their head office, endearingly called “Fruit Towers” on their website, is in Shepherd’s Bush where I used to live. They used to have whacky little vans covered in plastic grass that you always saw driving around there!

As you’ve probably noticed, we like to make life difficult for ourselves here and not content with a mere picture, Ted and I have made a 2 minute movie called “Alien 3 and three quarters” about our attempt to craft an astronaut out of some old Sainsbury’s Cookie Dough pots and it all goes a bit rubbish so we made a nice green alien out of Play Doh and some green Ribena straws instead. Ted actually drinking an Innocent smoothie in the clip was serendipity rather than deliberate. Normally he drinks Fruit Shoots in cafes.

In retrospect I wish I’d made aliens out of fondant and stuck them on cupcakes but please understand this happened in the week after we’d all been ill so were not quite on the ball.

To visit all the other letters in the series as they appear check out http://innocentdrinks.co.uk/magnetsa-z/index.html

You get 3 free magnets in packs of Innocent fruit puree tubes at the moment, the full set is extremely attractive but I can’t imagine being so dedicated to keep buying puree tubes to get the whole lot. But if you see any full sets going on Ebay (I won’t be selling mine I add), they’re very cute.

There’s a shot of all 26 magnets half way through in the film. I’m getting the hang of iMovie 11 now so I hope you enjoy this!