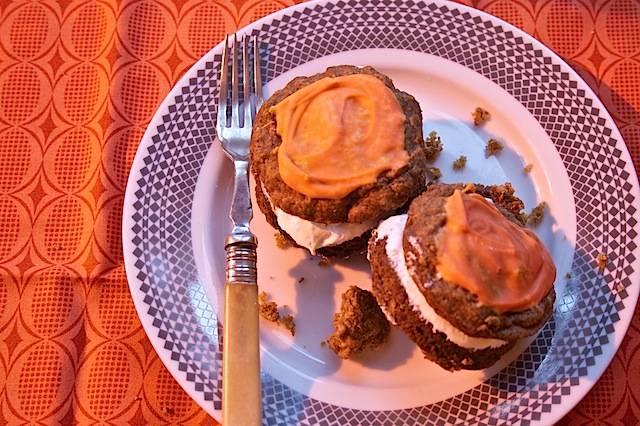 Note to self; I must, must, must stock up on pumpkin puree whilst it’s in season.

It amazes me something in cans should be “in season” but pumpkin puree is non existent in most supermarkets for ten and a half months of the year and costs a fortune on Amazon.

Libby’s is the best brand; Paula’s is too watery for baking in my experience. I get mine in Waitrose, six cans at a time whenever I see it. Pumpkin recipes are of course fun at this time of year but my greatest use for it is curry.

This recipe originally came from Let’s Make Whoopies by Sophie Grey. There must be half a dozen whoopie pie books out this year; similar to my experience with Claire Ptak’s chocolate whoopie pie recipe, my whoopie shells came out lumpy and rock-cake-like.

Tweaking the recipe, I dropped some flour, reduced the oven temperature and coaxed my batter into the shape of the whoppie tin with my fingers. Second time around was way better yielding the russet-y buns you see above. Considering I used wetter canned puree rather than the DIY version advocated, I think the original recipe would have made an even drier batter than my first one. I’ve shown my adjusted version below.

Quoting Simon Cowell on the cover of a baking book seems an odd marketing strategy, beyond being a friend of the writer he doesn’t appear to have any secret insight to whoopie pies. His presence on the cover and “about the author” feels kind of incongruous. It’s a good job I don’t need a celebrity quote on the cover of my own book otherwise I’d be limited to tenous connections with two former That’s Life presenters and a Buzzcock.

Pumpkin Whoopie Pies
Inspired by Sophie Grey recipe with a lot of fiddling to make them not look like rock cakes.

You can use a whoopie pie tin but they’re not crucial. Tins give an even shape, no tin gives a good crust. You decide what you prefer.

1. Preheat the oven to 180c/gas mark 4. Sieve the flour, bicarbonate of soda, spices and sugar into a bowl.

2. In a separate dish, stir the oil into the pumpkin puree. Fold into the dry ingredients until just combined.

3. Spoon dollops into a greased tin or onto a baking sheet lined with parchment paper. If using a tin, lightly push the batter into a flat circle with your finger leaving the tops with a smooth surface.

4. Bake for 8-9 minutes; the surface should spring back a bit when prodded.

5. Sandwich together with marshmallow fluff or frosting. Sophie used a cream cheese frosting although I used marshmallow fluff, available in jars from places like Selfridges. Frankly it’s as awkward to buy as the pumpkin but nevermind, there’s a recipe in the book, hence my making some different whoopie pies to use up the fluff left over from last week’s photo shoots!