Home » When I had a yard sale before jumble trail existed 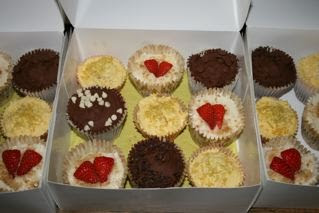 You know that feeling you get after having taken some exams and you get home and don’t know what to do with yourself? I feel a bit like that this afternoon.  My house is suitably de-cluttered after this morning’s yard sale and I am not pressurising myself to make any more cake this weekend.

Yesterday I made FIVE batches of cupcakes.  It was only supposed to be three but in my haste to complete a bulk load in record time I used the wrong flour.  My sugars and flours live in the cupboard above my kitchen scales so I weigh one ingredient after the other putting stuff straight back in there. I’d grabbed the plain flour by mistake, forgetting I’d just bought some new self raising that was sitting on the table.  Because I was doing a mixture of mini and full size cupcakes I thought I’d spread my mixture too thin and didn’t realise that it wasn’t rising very much.  Urrgh.

So I had to make one more mixture each of vanilla and chocolate.  That’s a lot of cupcakes.  And actually, I did salvage the “dud” batches because one chocolate batch did rise ok and the non-rising vanilla ones were still ok to do as strawberry cheesecakes (dense sponge = cheesecake base style cupcake?!)  Fortunately I have my new boxes from ebay to put them in and my new kitchen shelves to put them out the way while I work.

The cupcakes were being shared between a local National Childbirth Trust Nearly New Sale and the yard sale I was holding in my front garden this morning.  I made the following: 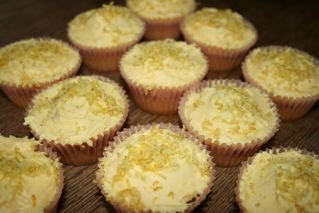 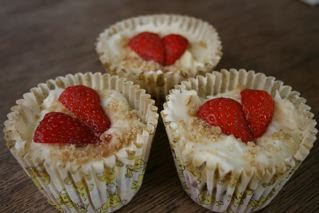 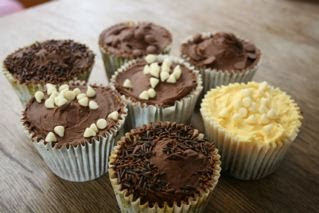 Chocolate bases with chocolate frosting and various sprinkles, (yellow one is left over lemon frosting)
My yard sale was a great success.  They’re unusual in the UK as people tend to do Boot Fairs instead. I picked a date that coincided with the local NCT sale when a lot of people would be wandering the area around with cash to spend. The posters went up around 48 hours in advance with some extra ones plastered to every lamp post between my house and the local shops from early this morning.   I emailed everyone in my street (whose email addresses I still have from The Big Lunch street party in July).
Quite a lot of people came from the NCT sale and commented that my cakes had been amongst the nicest there.  My yard sale shifted lots of stuff that had been cluttering up my cellar and back bedroom. It was too bulky, too fragile or too low value to put on ebay it and I couldn’t face packing the car up at 6am in the dark and then to pay £12 for the privilege of being swamped in a muddy field for a Boot Fair.  A yard sale is definitely more civilised!
There was a steady stream of people from 10am til 1pm, at one point there were about 12 people in my garden which felt very strange.  There was barely a moment to tweet from my phone how well it was going.  Almost everyone who came bought something and one family spent around £20.  Items were mostly 50p, £1 or £2 with 3 for 2 offers (Boots style!) and a free cake if you bought something.  I made around £120 altogether so it was well worth the effort.
Things I am delighted to have seen the back of:
Very old Apple laptop that someone else palmed off on me 3 years ago and I’ve never used it
20 yr old portable tv and video
Blue enamel habitat cd rack
Water filter
Old kettle
Ikea “lack” coffee table that we already gave away once and it came back
Ikea wheely chair
I was sad to part with my six remaining Nigella mugs but knew it was the sane thing to do.  Two of them have had handles drop off, three had cracked glazed inside, they stain badly and one makes a funny hissing noise when there is hot water in it (??!) .  The matt glaze shows scratches from wedding rings and set my teeth on edge.  I wish I’d loved them but they just didn’t do it for me.  So a very nice lady paid me £5 for the box.
What was left:
Lots of books – though I did sell Dawna Walter’s “Organized Living” ironically enough
Videos… who bothers with videos now?  Great films though
Elle magazines with subscriber edition covers.  Don’t people know these are collectable?
Toy reindeer that poos jellybeans.  It had lots of interest but nobody took it.
About half of the toiletries and cosmetics – still ebayable.
… and a load of stuff that looks like the dregs of a boot sale.
Now I need to sort though what is left and decide what to send to charity and what to take to the dump! 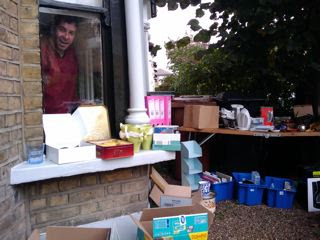 My husband looking though living room window during a quiet moment at the yard sale.  He is not for sale!