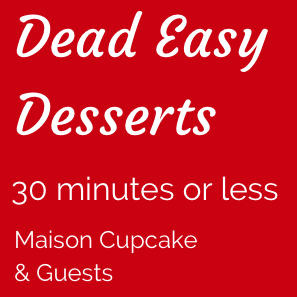 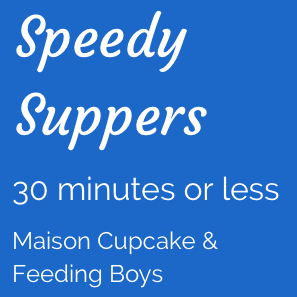 The latest Dead Easy Desserts is currently running at A Slice Off Me until Aug 29th theme STRAWBERRIES.

To volunteer, email me at “sarah AT maisoncupcake DOT com”. See existing schedule of future hosts below.

When: Usually 1st to 29th; display respective badge in post and add URL to the linky.

Speedy Suppers: Blog any savoury dish ready inside 30 minutes (check announcement for theme that month); link to this page and co-host Katie at Feeding Boys.

Dead Easy Desserts: Blog any sweet dish ready inside 30 minutes according to that month’s theme. Link to this page and the guest host if any.

Important: If you use or adapt a recipe from elsewhere please give credit. Images in submitted posts may be used in Pinterest pins and group boards. One image per post will appear in the round up. Sharing your entry with multiple events is fine by me.

I aim to retweet any entries using #deadeasydesserts #speedysuppers hashtag that @ mention @maisoncupcake on Twitter.

Enjoy your Speedy Suppers and your Dead Easy Desserts and have fun taking part!

#6 July 2014 hosted by Maison Cupcake theme raspberries Round up